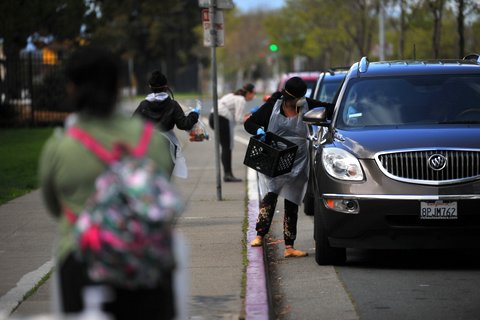 Posted at 19:39h in Education, Youth by Pulse Editor 0 Comments

Nine school campuses distributed bagged lunches to thousands of students in the West Contra Costa Unified School District as schools are closed due to the coronavirus pandemic.

All students 18 and under can get a meal at one of the schools from 11 a.m. to 1 p.m. They do not have to be eligible for free or reduced price meals.

Felkins said his family is looking to conserve food and having the option to pick-up a school lunch goes a long way.

Last Monday, the first day of distribution, Richmond High gave out 400 bagged lunches. It gave out 700 on Tuesday, 900 on Wednesday and 1,155 on Thursday.

On Friday, Richmond, alongside the other eight campuses, decided to give out double what a family would request, district food service coordinator Barbara Jellison said.

“This will allow them to have food on Saturday. A lot of kids use school as a food source,” said Whitney Bostian, an operations assistant with the WCCUSD food service. 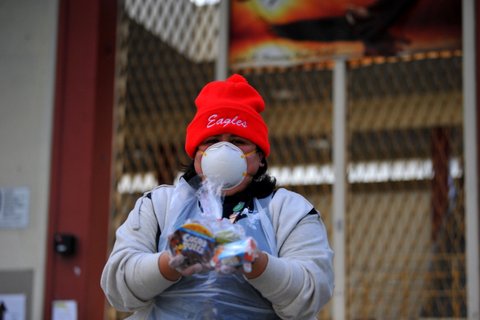 At the front of the Kennedy High campus, volunteers wore latex gloves, masks and plastic aprons, as cars lined up in the make-shift “drive thru” in the student drop-off zone.

People also walked up to the distribution site. Among them were Richmond resident Irene Ellana, 64, and her two grandkids. She was dismissed from her job at a food truck the day before and was told she wouldn’t be able to return to work for at least two weeks.

Her grandkids’ parents are still working, for now, but her not being able to provide financial support to for her family will hurt them economically, she said.

“If we do not work, we still have to pay bills and rent,” Ellana said. “I agree we have to stay inside, but it’s a hard time.”

But having Kennedy nearby with access to food for them is a “big help,” she said.

Kennedy principal Felicia Phillips said people have started to feel more comfortable about coming out to get food, so the numbers of bagged lunches given out are only going to grow. She is thankful that her campus is one of the nine sites keeping students fed.

“We got their back,” she said Thursday as she prepared to give out another bagged lunch.

No on-site school means that their service to the community as educators is limited, but Phillips and the volunteers from her school and other schools still want to be involved in helping out.

“It is an honor to serve as a small but important role,” Phillips said.

Update: WCCUSD has expanded its food service program to include eight additional locations in Richmond and San Pablo. Meals can now be picked up Monday through Friday at the following times and locations: 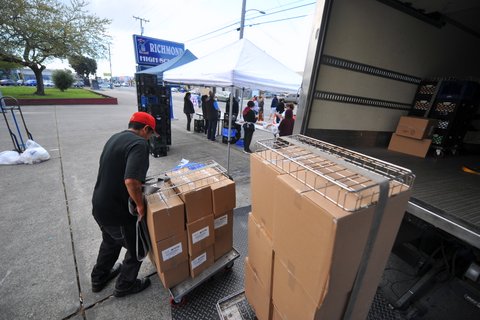