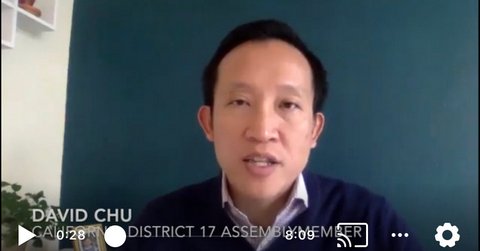 21 Apr Leaders Call for More Help From the Federal Government

Posted at 19:23h in Politics by Pulse Editor 0 Comments

“The need is enormous,” Chiu said.

The two outlined government efforts to help — as well as roadblocks in the process — during an hour-long media teleconference on April 17 about the pandemic’s impact on ethnic populations.

One big issue is simply determining when restrictions might be lifted.

“We just don’t know how long these shelter-in-place orders are going to be,” Chiu said. “It’s all a function of the curve and keeping our communities safe.”

The current state shelter-in-place order expires May 4. But discussions are ongoing about what restrictions might be lifted and what businesses would be allowed to reopen after that.

Earlier in the week, Gov. Gavin Newsom outlined what benchmarks needed to be met for him to lift the shelter orders, including widespread testing, the healthcare system’s ability to treat COVID-19 patients, and how well people more vulnerable to the disease are protected. But Newsom has yet to give a definitive timeline on when that could all happen.

Chiu said he hopes that when the state legislature goes back into session — also tentatively scheduled for May 4 — it will consider a state economic stimulus package.

“We know this is particularly important for our diverse communities, certainly our immigrant communities,” he said.

“That will be up and running in about two weeks… to provide funding for non-traditional workers: independent contractors, so-called gig workers, self-employed workers who will finally receive some level of unemployment, safety net funding.”

Congressman Khanna said it’s also important to protect the estimated 60 million people who continue to work through the pandemic.

He and U.S. Senator Elizabeth Warren have introduced The Essential Worker Bill of Rights to cover a multitude of issues: requiring safe conditions in the workplace, offering hazard pay, support for child care, healthcare, and bargaining rights.

“These have been the invisible workers that support our economy,” Khanna said. “They need to be treated with the respect they deserve.”

He also said the next federal stimulus measure should include financial support for all cities and states. The last bill did not give aid to cities with a population of less than half a million people.

“We are going to be very hard-hit in the state of California with the budget crisis, with the decline in tax revenue, with the unemployment, huge shortfalls. The federal government needs to step up,” Khanna said.

The teleconference also included updates on the impacts on farmworkers in the Central Valley, as well as Native Americans.

Genoveva Islas of Cultiva la Salud said a major issue is access to healthcare right now, which is exacerbated by COVID-19.

“The San Joaquin Valley has consistently suffered from a provider shortage,” she said. “We do not have an adequate amount of trained physicians to respond if there is a higher level of outbreak.”

Dr. Tung Nguyen, M.D., the chair of UCSF’s general internal medicine department, said as restrictions are lifted, there will likely be many adjustments for people to make, “depending on the level of infection.”

“There may be some element of mask-wearing more regularly, assuming we have an adequate supply of masks,” he said.

Nguyen also said as we see a drop in new cases of infection, manufacturers of supplies like masks, ventilators, and hospital beds need to take advantage of the lull.

Nguyen also addressed skeptics who still don’t believe how serious a threat the pandemic is. He said the best strategy is to drive home the “factual messages” to make the case.

For example, “continue to say that this (COVID-19) is 15- to 45-times more deadly than the flu. That message has to get across,” Nguyen said.

Friday’s teleconference was sponsored by Ethnic Media Services, one a series related to the pandemic.