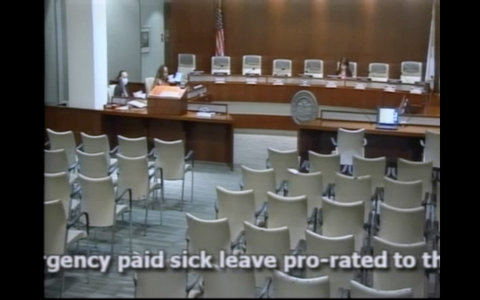 Posted at 23:19h in City Government by Pulse Editor 0 Comments

The Richmond City Council on Tuesday unanimously agreed to extend paid leave for permanent city employees who are unable to work because of the coronavirus pandemic.

The council also approved 80 hours of emergency sick leave to all employees through the Families First Coronavirus Response Act, and took action to temporarily allow public safety employees to either defer vacation leave earned during the shelter-in-place order or sell it back.

The paid leave will last until the workers can return to their job sites, which has been extended through May 31. All permanent workers — both essential and non-essential — will receive full pay without using vacation days or administrative leave. Temporary workers, however, will only be paid if work is available and they’re scheduled hours, according to a staff report.

The move was one of two possible options put forward by city staff.

Option A, which wasn’t approved, would have made it so employees unable to work from home wouldn’t receive pay and would instead have to use accrued leave, take leave without pay, or potentially file for unemployment, among other options. This potentially could have saved the city money, but it also could result in a financially destabilized or distressed workforce, according to the staff report.

During the public comment period, former Richmond Mayor Gayle McLaughlin encouraged the council to adopt the second option. She said it would mitigate financial stress for staff, and those who have been forced to stay at home shouldn’t be forced into economic hardship as a result.

“We’re living in extremely difficult times, and it takes sound and principled reasoning to do what’s right for our community and those who serve our community,” McLaughlin said.

Despite the support for option B, several councilmembers criticized staff for not including the estimated cost of each plan in their report. Mayor Tom Butt said he found the fact they were making this decision without “even a wild guess” about the cost of each option troubling.

Councilmember Nat Bates said he was worried about the cost considering the drop in revenues the city is facing because of the pandemic. He amended the final motion, directing staff to provide estimates of the cost of each option in about a month.

“We are facing a financial budget crisis, and we’re going to have to start being very judicial in terms of what we pay and don’t pay,” Bates said. “I’m not comfortable with carte blanche giving away taxpayer’s money. I don’t think that’s unreasonable.”

Bates also suggested employees that aren’t working right now, including those in the library and recreation departments, could potentially help other departments out by, for example, helping clean the city.

“I do believe that our newly appointed managers should do their utmost to find new jobs for those who are currently unemployed, so they can be doing work for the city at home,” Martinez said.