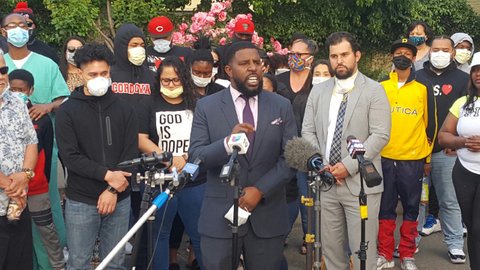 Posted at 07:49h in Police by Pulse Editor 0 Comments

Above: From the Law Office of John L. Burris, attorney Adante Pointer speaks at a press conference in Rancho Cordova with family and friends of the 14 year old boy who was beaten up by a deputy April 29. (Photo by Antonio Harvey)

A shocking video of a police officer beating a 14-year-old African American boy over a Swisher tobacco cigarette is being shared across social media platforms around the world.

In the clip that has been re-posted tens of thousands of times, a Rancho Cordova deputy is captured pummeling the youth in his chest as he presses him to the ground in an incident that happened April 27.

Now, the family of the teen is calling for the firing of the officer, although stating that they understand the case involves a minor in possession of a cigarillo.

“There is no valid reason for Brian Fowell, an officer of the law, to punch a child in the face and chest. There is no valid reason for an officer to push a child’s face into the ground against a curb by their neck,” said Tanya Faison, founder of Black Lives Matter Sacramento in a written statement to California Black Media. “This 14-year-old boy posed no threat to this officer and the actions officer Brian Fowell took are dangerous for our community.”

The incident happened near a 7-Eleven store where the Rancho Cordova Police Department (RCPD) reports that the youth received the tobacco cigarette from an adult.

“The video of the Rancho Cordova deputy repeatedly hitting and slapping a much smaller unarmed 14-year-old boy is disturbing to us as parents and frustrating to us as lawmakers,” reads a statement the California Legislative Black Caucus (CLBC) released to California Black Media.

“Over the last few years, the legislature has made clear their expectations about the appropriate use of force and the need to find alternatives, especially when it comes to unarmed minors,” the statement continued.

Race, Police Use of Force, Black Teens and Nicotine Addiction

For decades now, activists have targeted tobacco products in the state of California, partially to deter young people from smoking or chewing the cured and dried leaves, which contain nicotine and can lead to addiction.

Carol McGruder, co-chair of the African American Tobacco Control Leadership Council, has been a major force in the anti-tobacco crusade in California. One of the main arguments she makes to lawmakers is her view that tobacco manufacturers target Black people with their products.

McGruder has been working hard to put the brakes on menthol cigarettes, cigarillos like Swishers, and e-cigarettes, which are used for vaping, a favorite way to consume tobacco among teens. Vaping has led to severe respiratory illnesses among first-time smokers, according to the Centers for Disease Control and Prevention.

“Anger, disgust, rage, these are the feelings we felt as we watched the video,” said McGruder. “Rage that another Black boy was traumatized by police brutality.  As horrific as this video is, what is more horrific is that the biggest invisible killer and profiler of Black boys, the tobacco industry, will be able to latch onto it and use the legitimate concerns of our community to block public health policies that would stop the industry from profiling and addicting our children.”

Some Black leaders, including the Rev. Al Sharpton, president of National Action Network agree that tobacco is harmful to Black teens. But they also believe that over-taxing or outlawing the substance – particularly menthol cigarettes which Blacks smoke the most — creates an illicit underground market that puts young Black people under the scrutiny of law enforcement officers. He cites the case of Eric Garner in New York City. Garner was illegally selling “loosies,” unlicensed retail cigarette sticks, before police officers subdued, suffocated and killed him. Police surveillance, they say, increases the odds of dangerous, often times deadly, run-ins with the law like the one involving the cops and Garner — or the teen in Rancho Cordova.

“Often, tobacco and marijuana are used as smoke screens for racism and abuse in policing in Black and Brown communities,” says the Rev. Tecoy Porter, President, Sacramento branch of the National Action Network. “We must condemn those practices.”

Anti-Tobacco Laws in California and Around the U.S.

The California legislature has passed several laws aimed at curbing the use of tobacco. But neither lawmakers, nor the state’s health – nor its law enforcement –  authorities have enacted explicit policy safeguards to prevent what happened in the Rancho Cordova incident, critics say.

San Francisco County was the first county in California to ban menthol cigarettes in the summer of 2017. In California, no state-wide ban has been put in place against the sale of flavored tobacco products. However, certain cities and counties in the state have instituted local ordinances prohibiting purchases.

The county of Sacramento banned the sale of menthol cigarettes as of January 1 of this year.

In September 2009, cigarettes with specific characterizing flavors were prohibited in the U.S., as part of the Family Smoking Prevention and Tobacco Control Act (TCA) that gave the U.S. Food and Drug Administration (FDA) authority over tobacco products.

Despite the FDA’s ban on flavored cigarettes, the overall market for flavored tobacco products continues to prosper. Tobacco companies significantly stepped up the introduction and marketing of flavored and other tobacco products (OTPs), particularly e-cigarettes and cigars, as well as smokeless tobacco and hookah tobacco.

The Campaign for Tobacco-Free Kids says that tobacco companies claim to be responding to “adult tobacco” users’ demands for variety, but flavored tobacco products still have a key role in luring new users, they say, particularly kids, to a lifetime of addiction.

“Black boys aren’t born with a Newport or a Swisher Sweet in their mouths,” says McGruder. “Our community must understand that there is a highly organized and efficient system that does that.”

McGruder and other anti-Tobacco lobbyists say the police-use-of-excessive-force case in Rancho Cordova may have blown the lid off a problem that has been simmering for years. It has also put a focus on the Rancho Cordova Police Department and past allegations of police brutality.

Sacramento County Sheriff’s Department spokesperson Sgt. Tess Deterding said in a written statement that the deputy was in the area responding to citizens’ complaints about sales of alcohol, tobacco and drugs to minors.

“It’s important to put the video footage into context, especially in relation to a use-of-force incident. In this case, the deputy saw what he believed to be a hand-to-hand exchange between an adult and juvenile,” Deterding stated.

The RCPD account stated that the officer had reasonable suspicion that criminal activity was occurring and the deputy attempted to detain the juvenile so he could continue the investigation. The juvenile became physically resistive, the RCDP continued in their written statement, causing the deputy to lose control of his handcuffs.

The deputy attempted to maintain control of the juvenile without his handcuffs while alone waiting for his partners to arrive and assist him, the report said. Ultimately, the deputy recovered tobacco products from the 14-year-old, which the RCDP presumes is the reason for his resistance.

But Black lawmakers responded to the RCPD official statement, countering that “this use of force is in no way proportional to the suspected crime or justified by the actions of the child. We will monitor this situation closely and expect that the officer will be held accountable for the abusive actions taken in the name of public safety.”

Rancho Cordova is approximately 14 miles east of downtown Sacramento. It was incorporated as a city in 2003, and has its own municipalities, including a mayor, city council, fire department and the Rancho Cordova Police department that is contracted through the Sacramento County Sheriff’s Department.

The city — whose history stretches back to the Gold Rush days of the mid-19th century and the era of the Pony Express — has a population of over 74,000, the World Population Review reported, a number based on a 2017 U.S. Census Bureau estimate.

Out of 6,347 Black people who live in Rancho Cordova, 23% have household incomes below the poverty line, the highest number of all ethnic groups in the city, according to the World Population Review. Most African Americans live in some of the most underserved and hard-to-count census tracts in the state, according to California Black Media’s “Counting Black California: Roadmap to The Hardest-to-Count Census Tracts” report.

Past Allegations of Police Misconduct

Last week’s incident was not a first. The RCPD has been accused of aggression before and it has been hit by police misconduct lawsuits involving the Black community in the past.

In March 2019, African American twins, Carlos and Thomas Williams, say the officers of RCPD allegedly choked and beat them before taking them into custody.

The brothers filed a civil rights violation lawsuit, which claims they were arrested on a trumped up charge at Carlos Williams’ home.

Adanté Pointer, an attorney at the John L. Burris law firm in Oakland, who was speaking on behalf of the family of the 14-year-old Rancho Cordova teen, said this is too often the case.

“We’re talking about a kid buying tobacco and an officer with an opportunity to actually build community relationships in dealing with a young man,” said Pointer. “Instead, I’m certain, he’s left a mark on this young man’s spirit, soul and brain that will live with him for the rest of his life.”