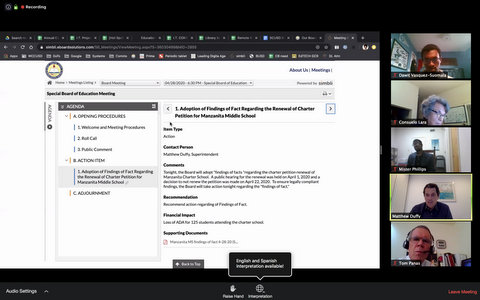 Posted at 16:58h in Education by Pulse Editor 0 Comments

The West Contra Costa Board of Education voted Tuesday to accept a report that found there was a factual basis for not renewing the charter for Manzanita Middle School.

Manzanita serves roughly 125 students in grades six to eight. It was the first charter school in the district, in operation since September 2000.

The board voted to deny renewing Manzanita’s charter because it found issues with the school’s academic performance, according to the Findings of Fact document presented at the meeting. The board, in denying, found Manzanita was demonstrably unlikely to implement its program successfully.

The vote to deny, which was 4-1 with boardmember Consuelo Lara opposing, effectively means the school will close if it doesn’t win an appeal at the county or state level.

At the Tuesday meeting, held digitally, most of the time was taken up by district staff reading through about 60 public comments from the school’s students, parents, and teachers. The comments followed similar lines.

Students talked about how the school made them feel accepted, how the school felt like a family, and how the teachers wanted them to learn and not give up on something when it felt difficult.

The original decision to deny — made on April 22 in an identical 4-1 vote — went against the staff recommendation to renew the charter, and to encourage Manzanita to conduct outreach to underrepresented populations, newcomers, and English Language Learners.

Linda Delgado, the district’s director of charter oversight, said at the April 22 meeting she recommended approval because she had a great deal of confidence in the school’s leadership. She also said the board would need to create findings to support a nonrenewal, as Manzanita had no notices of violation that would preempt such an action.

“So far as the legal benchmark is concerned, the school has passed it,” Delgado said at the time.

Edward Sklar, an attorney and managing partner at the firm Lozano Smith, helped put together the Findings of Fact with Delgado to allow for the denial. He said at the meeting that the document expands on the board’s prior concerns about Manzanita’s academic performance compared to other district middle schools.

Lara, the sole boardmember in favor of renewing the charter, published an op-ed about Manzanita in The Richmond Standard on Tuesday. She wrote that the board voted to deny the petition against district staff recommendation and legal standards. She wrote that no requests for additional information from district staff about their concerns were given during the vote, and no questions were asked of the Manzanita principal, Chantell Caldwell. However, Caldwell did receive questions from the board while presenting the renewal petition on April 1.

Lara, in her op-ed, also elaborated on the virtues of the school, writing that it was named a California distinguished school in 2005, was voted best public charter school in Contra Costa County in 2012, and that it’s a parent cooperative with a governing board of parents elected by parents.

“They have a strong commitment to provide a safe, secure and nurturing environment,” Lara wrote.

Student boardmember Dawit Vasquez-Suomala, who opposed the denial, said he didn’t feel like the board was representing the wishes of the parents and the kids of Manzanita if they couldn’t guarantee students a better education at another school.

The rest of the board found Manzanita’s academic performance reason enough to vote for denial.

Boardmember Mister Phillips said, at the end of the day, the performance wasn’t where it was supposed to be. He said he didn’t see how he could change his position after reading the staff report.

“I did the research, the homework. It frankly does not paint a pretty picture at all,” Phillips said. “If I thought otherwise I’d tell you.”

Board president Stephanie Hernández-Jarvis said she appreciated hearing how Manzanita students had been affected in positive ways, but didn’t see the facts of the educational outcomes lining up with the expressed experiences.

Boardmember Valerie Cuevas said she’d learned to hold steady to the question: “What is best for the majority of students in this school district?” She said she recognized the pain and suffering of the Manzanita students, but she didn’t think there was anything Manzanita offered — in terms of socio-emotional learning — that couldn’t be replicated in any one of the district-run schools.

“I’m going to look at what’s core and central for what our students need to succeed,” Cuevas said, “and I think they need our district schools to be strengthened