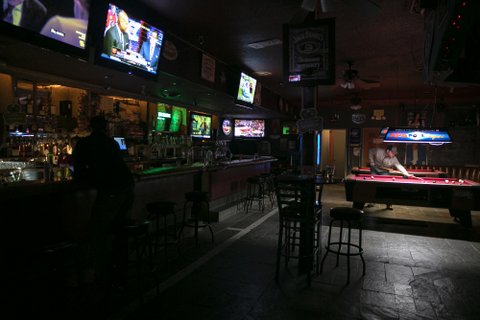 15 May California Cracks Down On Rogue Bars

Posted at 00:47h in California by Pulse Editor 0 Comments

Above: Regulars playing pool at an Oakland bar before seven Bay Area counties enacted a shelter in place order in March. Photo by Anne Wernikoff

California bars are on a highball hijinx alert.

The Department of Alcoholic Beverage Control is proposing emergency powers to shut down bars and restaurants if they disobey the state’s public health order by serving mojitos and manhattans to patrons in an establishment.

Not only could the alcohol cops suspend licenses, the owners would have to appeal to a superior court, a more difficult hurdle than the usual process of challenging the ABC’s appeals board. The department is stepping up enforcement as some local jurisdictions defy the governor’s order.

“Many businesses and citizens have demonstrated an unwillingness to abide by the public health orders and have instead opened for business, increasing risks to the public health, safety, and welfare,” the state wrote in justifying the rule change.

“Bad actors are gaming the system; because they see an impending death sentence for their business on the horizon, they have no reasonable incentive to correct their behavior and abide by the rules.”

The emergency order was made public Monday and will be reviewed by the state’s rulemaking agency, the Office of Administrative Law, before taking effect.

Under Gov. Gavin Newsom’s statewide shelter-in-place order, vendors can only sell alcohol to-go — but it must be sold with food. Some bars are partnering with restaurants to sell their beverages with food, but others have been punished. One young Sacramento bar, The Snug, was shut down after regulators found it was serving cocktails without having a kitchen. It now serves beverages to go in partnership with a local pub with a kitchen.

Still, some bars and restaurants are flouting the rules, which is prompting the department to take action.

“Recently the department began to receive complaints that some ABC licensees are disregarding the laws and regulations set by the department or orders from their local officials and are thereby harming the public health, safety and welfare,” the department wrote.

“Due to delays inherent in the normal license disciplinary process, the department is unable to immediately address these violations in the absence of this proposed emergency decision regulation.”

Restaurants are clamoring alongside other businesses to resume operations as the economic toll of the coronavirus pandemic drags on. But the governor has made clear the public health and science will drive decisions to reopen California.

The governor announced Tuesday guidelines for dine-in services at restaurants and other businesses. In the past, he has warned that dining out would be a much different experience with hosts taking temperatures at the door, passing out disposable menus and servers wearing masks and gloves.

“The worst mistake we can make is to just throw those face coverings off and disabuse ourselves that this virus has gone away, or taken the summer off, or it’s on a deep sabbatical, or vacation,” he said. “It’s not.”

For now, the hammer is coming down on establishments.

When a Fresno restaurant defied public health orders, it ended up paying thousands of dollars in fines for serving dine-in customers, The Fresno Bee reported. After a Mother’s Day arrest made in front of his eatery and a $5,000 fine, restaurant owner Ammar Ibrahim wrote on Facebook that his restaurant will return to serving take-out orders only.

“Not once did I ever state I was above the law or better than the next person,” Ibrahim wrote. “I’m just a father and a small business owner trying to make a living for my family & give back to my community.”