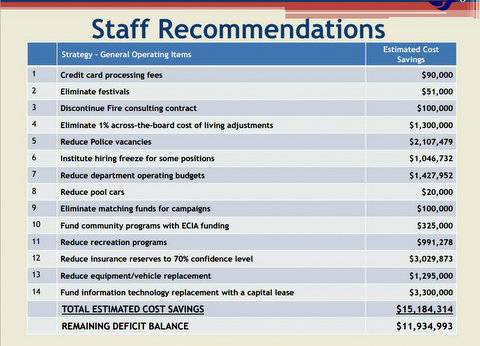 29 May Richmond Council Cuts $15.2 million, Half of Projected Deficit

Posted at 22:45h in City Government by Pulse Editor 1 Comment

The Richmond City Council on Tuesday approved about $15.2 million in budget cuts to help close a projected $29.5 million deficit.

The projected deficit, which increased to $29.5 million from an earlier projection of $27.1 million, results mostly from lost tax revenues during the coronavirus pandemic.

The effects of the pandemic are heightened by an existing structural deficit, which means the city’s expenses have eclipsed its revenue growth rates for years.

The cuts include a hiring freeze; eliminating, among other things, festivals, a 1% cost of living adjustment for city staff, and matching funds for political campaigns; reducing reserves and recreation programs; and funding information technology upgrades over five years instead of one; and more.

Future cost-saving strategies are likely to include layoffs or union concessions, according to an e-forum post by Mayor Tom Butt.

Though most of the cuts haven’t been contentious, one cut that received attention was the elimination of matching funds for campaigns, which are dispersed in $2,500 increments, to a maximum of $75,000, to fund qualified political campaigns as they raise outside funding.

Councilmember Jael Myrick questioned whether repealing the ordinance entirely was necessary, given that he still supports public financing of elections.

Councilmember Nat Bates said now that Richmond has moved to district elections, which cost less to campaign in, so there’s now less need. He also said he never supported the ordinance in the first place.

“I resent my money going to people I don’t care for and don’t want to see elected,” Bates said. “Taxpayers should not be supporting these candidates.”

“This cut will mean our city will grant priority to wealthy or privileged candidates,” Weir said.

Some options for filling in the remaining deficit, including the partial or full closure of pools and libraries, have received fierce backlash from the public. Indeed, most public comments during the meeting urged the council not to close pools or libraries.

Myrick said the cuts some people were addressing weren’t on the table yet.

Additional budget balancing strategies, which will likely veer into more contentious territory, will be presented at the next council meeting on June 2.

“This is the first bite of the apple, we’re going to figure out the other, harder, stuff later,” Myrick said. “As of now, I think this is the first step and I think it’s a step we can take.”