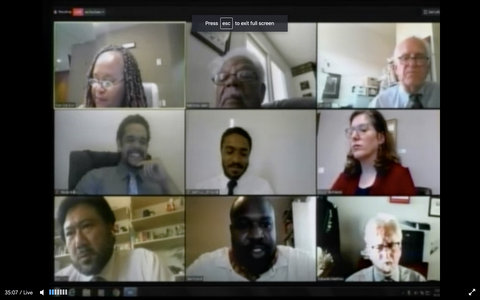 Posted at 06:25h in City Government by Pulse Editor 0 Comments

The Richmond City Council on Tuesday voted unanimously to condemn the police killing of George Floyd and to stand in solidarity with protesters nationwide.

The council also shot down a 6 p.m. curfew that City Manager Laura Snideman put in place earlier that day.

Protests have continued to surge throughout the United States after Minneapolis police officers killed Floyd, a 46-year-old Black man, on May 25.

Councilmember Nat Bates introduced the urgency item, saying as an 88-year-old African American man he’d “experienced more than most of you youngsters.” Bates said Floyd’s killing was dehumanising and “certainly a criminal act” and felt the city had a responsibility to tell its residents that the kind of behavior exhibited by the Minnesota officers isn’t tolerated.

Bates said he’d experienced a similar situation in 1968 after Dr. Martin Luther King Jr. was assassinated, and in 1991 when Rodney King was beaten by Los Angeles police officers, “and it’s gone on and on and on.” He said he was hopeful about the young people who are protesting across the country and understand racial disparities and racist attitudes.

“We obviously do not support the looting, the thuggish attitudes, but people are fed up,” Bates said. “We need to look at ourselves and see if we can’t make our society a lot better.”

Interim Police Chief Bisa French said she was appalled to see Floyd’s death, and the officers’ who killed him have undermined the law enforcement profession and damaged police efforts to build relationships with communities. The tactics used by the officers, French said, are counter to how Richmond officers are trained, and “showed a total lack of compassion and humanity.”

French said she was trying to use the moment as an opportunity to generate change, not just within the RPD, but, hopefully, within law enforcement as a whole.

“We know this incident is not just an event,” French said. “Everything that’s happening now is really the start to a new policing era. The one that the community has been desperately crying out for and that we, the law enforcement community as a whole, have failed to listen to.”

French continued, saying the RPD was all for peaceful protest, but they had a duty to protect property and life. She said they’d struggled with that the past couple days, particularly on Monday night, when her department’s officers made several arrests.

During the public comment period, Mike Parker, a member of the Richmond Progressive Alliance steering committee, said he appreciated French’s efforts, but a large part of the population in the country doesn’t feel safer when the police are called. He said the curfew was at odds with the ability of people to protest, and brought up RPD cover-ups, including the police killing of Richard “Pedie” Perez and the Celeste Guap sexual exploitation scandal.

Parker also compared the swift action taken against protesters to the slow governmental response to the coronavirus pandemic.

“The irony of this whole situation,” he said, “is that our government seems to be able to suspend constitutional rights with its curfew when it wants to at a moment’s notice, but cannot suspend the collection of rents and mortgages to keep people in their homes. Do you see the institutional bias that’s here?”

The council also voted 6-1 — with Mayor Tom Butt opposing — to suspend a 6 p.m. curfew enacted by the city manager earlier that day, at French’s request. The council roundly criticized the curfew, though it was only set to last one day, in light of Contra Costa County also putting out an 8 p.m. curfew on the same day.

French explained that she requested the curfew because of a high amount of looting and property destruction that occurred on Monday night. She recalled seeing hundreds of cars near the Hilltop Mall waiting around for the police to leave so the people in the cars could begin looting. She said she thought the curfew would be in the city’s best interest.

Councilmember Jael Myrick said he thought curfews in this situation were counterproductive, especially one as early as 6 p.m. He said the curfews would do more to motivate already angry people to resist.

“All (the curfew) really does is put people who are already upset, already angry, already looking for people to blame,” he said. “It gives them a local person to be mad at.”