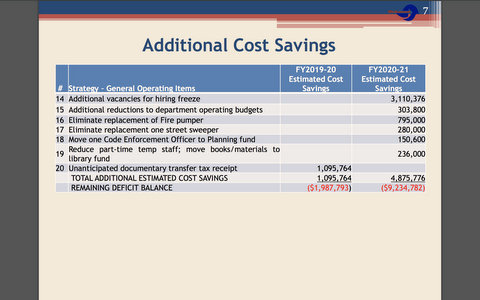 Posted at 04:44h in City Government by Pulse Editor 0 Comments

The Richmond City Council on Tuesday voted to cut roughly $4.65 million from the budget, which is needed to help fill a projected $29.5 million deficit caused largely by lost revenues during the pandemic.

The council delayed making major decisions on the budget, but approved the reductions 5-2, with councilmembers Nat Bates and Eduardo Martinez voting against the measure.

The cut includes hiring freezes for vacant positions, reductions to departmental operating budgets, not replacing a fire pumper and street sweeper, and moving a code enforcement officer from the general fund to the planning fund, according to a staff presentation.

Last week, the council approved about $15.2 million in cuts to help fill the deficit next year, which means they must identify about $9.5 million more in reductions before approving the budget at the end of June. This means the council has three scheduled meetings remaining to finalize the budget.

“We don’t have time to keep kicking this can down the road,” Mayor Tom Butt said.

One cut city staff suggested, which the council didn’t approve, was a reduction to part-time library staff funding and moving library books and materials to a different funding source, adding up to about $236,000, according to Sal Vaca, director of employment and training.

As with previous meetings, most public commenters opposed the partial or full closure of libraries or a reduction in library services. The council had previously considered cutting the Point Richmond and Bayview Library branches as a potential last resort, done only once all budget saving options were eliminated. Councilmember Jael Myrick said the options presented by staff on Tuesday contained no cuts to the branches, and, at worst, would reduce hours.

“Even in the worst case scenario, we’re not talking about closing down libraries,” Myrick said.

The council heard a presentation from city unions and from city staff on routes they could take to fill the remainder of the deficit. Butt simplified the difference between their suggestions as the unions want the council to enact an even larger hiring freeze over vacant city positions and tap into the city’s reserves, while staff doesn’t.

“The only difference between all these proposals is four to five million dollars in frozen positions and four to five million dollars in spending the reserves,” Butt said. “If we don’t spend the reserves down, and we don’t take out the rest of those frozen positions, then we’ve either got to do layoffs or we’ve got to have some major concessions from the unions.”

Belinda Brown, finance director, said city staff doesn’t support reducing reserve levels because of cash flow needs — the city has high enough reserve levels right now to float the city until they get the majority of their revenues. In previous meetings, councilmembers have raised concerns with taking the reserve too far below policy levels, because doing so could drop the city’s bond ratings and damage the city’s long-term financial health.

However, Sean Stalbaum, representative of the International Federation of Professional and Technical Engineers (IFPT Local 1021), said the economic devastation of the coronavirus called for spending down reserves now more than ever.

“Virtually all state and local agencies in the country are spending down their reserves right now, many below their policy limits,” Stalbaum said. “If ever there was a time to spend some rainy day funds, this is it.”

City staff briefly went over their four budget reduction proposals and asked for direction from the council on where to go before the next council meeting on June 9. Some councilmembers said that they didn’t know how to respond, because they’d only been given the options a few hours before the council meeting, at about 3.p.m. that day.

Councilmember Eduardo Martinez said it was hard to pick one option over another because he didn’t know how they compare and contrast — he hadn’t had the time to look them over thoroughly, he said. Councilmember Nat Bates said giving the council the options so late was “totally unacceptable.” He said he hadn’t been able to look through the options because he didn’t know they were coming, and suggested the council have a special meeting later in the week to go over the budget. Councilmember Demnlus Johnson supported the idea of having a special meeting, though no motion was made and no extra meeting is currently scheduled.

“This council has to take time to observe, digest and review the budget as presented,” Bates said. “And two hours or three hours before the council meeting is not sufficient time.”

The council is scheduled to hold a special meeting on the budget next Tuesday, June 9.