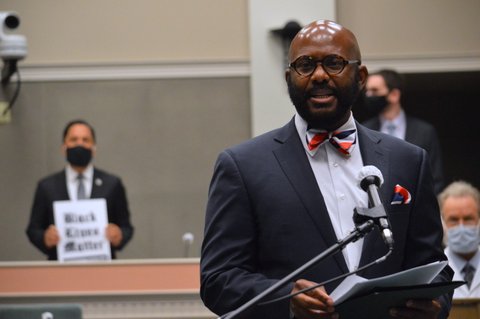 Posted at 16:53h in California, Police by Pulse Editor 0 Comments

Above: Assemblymember Mike Gipson (D-Carson)  speaking at a press conference June 8, at the State Capitol. (Photo By Antonio Harvey )

The legislation, AB 1196, bans law enforcement officers in the state from using carotid artery restraints to subdue and detain suspects. The chokehold — commonly called the “sleeper hold” among wrestling fans — is supposed to render victims unconscious, but it has proven to be deadly.

“The world watched as the 200-pound weight of a police officer was leveraged on the neck of George Floyd for over 8 minutes. Two other officers held him down and another watched as his body succumbed to the attack and went limp before expiring,” said Gipson, who co-authored the bill with other legislators who are members of California’s Black, Latino, Asian & Pacific Islander, and LGBTQ caucuses.

At a ceremony held at the state Capitol to unveil the bill Monday, Gipson said, “My bill creates a unified policy across law enforcement departments so that these methods can no longer be used here in the state of California.

“I also want to point out,” he continued, “Congresswoman Karen Bass, on the federal level, along with Speaker Nancy Pelosi, introduced a similar piece of legislation.”

Carotid artery restraints are choking maneuvers that prevent blood from reaching the brain of the victim by compressing arteries in the neck. In 2014, New York City police officers used the tactic to kill Eric Garner, another unarmed African American man, on Staten Island in that city.

“Across this country, we train techniques on strangleholds that put people’s lives at risk. Now, we can argue that these are used as exceptions, but at the end of the day, a carotid hold, that literally is designed to stop people’s blood from flowing into their brain, that has no place any longer in the 21st-century practices and policing,” Gov. Newsom said during a news conference held at the California Museum’s Unity Center in Sacramento.

There are nearly 600 law enforcement agencies in California, including police stations, and almost 80,000 police officers, according to the United States Bureau of Justice Statistics.

Since Minneapolis Police Department officers killed Floyd on Memorial Day, protests calling for racial and economic justice have erupted in cities and towns in California, across the country and around the world.

“The deadly use of force technique can be performed using any object and can easily go wrong. This time it was a knee,”  Gipson said, commenting on the legislation he authored.

Right after Floyd’s death, the San Diego, Davis, and Sacramento police departments officially announced that the agencies would immediately refrain from using the carotid artery restraint, also known as the “chokehold.”

Under California Senate Bill 1421, which went into effect in January 2019, the carotid artery restraint method is one of the practices law enforcement agencies are required to disclose in officers’ misconduct cases to increase accountability.

The city of San Francisco has also taken steps to prohibit the use of the deadly-force technique.

Dr. Lee T. Snook, one of the speakers at AB 1196 introduction in Sacramento, said various medical associations across the country have been asking, “What more can we do to end this systemic racism in the house of medicine and justice?”

Snook, is the president-elect of the California Medical Association (CMA), a professional organization founded in 1856 that currently has nearly 50,000 members. CMA supports Gipson’s bill.

“We believe this bill is small, but a significant step in that effort,” Snook said. “Carotid restraints have been routinely misused, abused, and have proven fatal. We see it in dozens of cases that go unnoticed by the press every single year.”