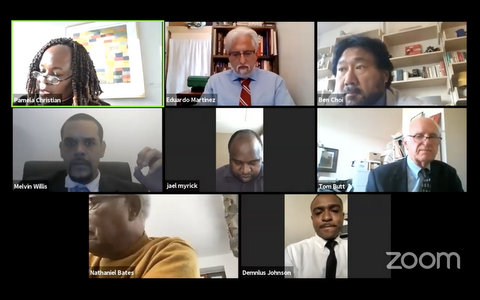 The Richmond City Council on Tuesday received budget balancing recommendations from a union representative and discussed options for filling in the remainder of a $29.5 million budget deficit.

The final budget for fiscal year 2020-21 will likely be approved at the council meeting next Tuesday. The council still needs to identify about $5.7 million in reductions to reach a balanced budget. The members last week approved “proposal C” as a strategy for city staff to structure these reductions around. The measure does not call for any city workers to be laid off but does ask for about $6.75 million in concessions from city unions.

About $5.3 million of the proposed concessions come from furloughs for both sworn and non-sworn city staff. The rest would come from removing a 1% cost of living adjustment for the police and fire departments, getting rid of car allowances, and suspending professional development for a year, among other items.

The council initially didn’t have a budget item on its agenda this week, but council member Melvin Willis added an emergency item to allow union representative Sean Stalbaum to present recommendations from the city unions.

Stalbaum recommended that departments defer vehicle replacements, among other purchases. He also suggested freezing, or waiting to fill, additional vacant positions in the police and public works departments. The deferrals add up to about $170,000 in savings, while the freezes add up to roughly $1.176 million. However, some of the suggested actions, such as the freezes to the public works positions, have already been carried out by city staff.

One of Stalbaum’s suggested freezes was a police lieutenant position that the council froze last week and then invested the savings of about $286,000 in the Office of Neighborhood Safety. Investing elsewhere prevented the city from saving money, Saulbaum said.

Willis said he was hesitant to remove the funds committed to ONS because of ongoing calls from the community to defund the police department and invest that money elsewhere.

Stalbaum also recommended making a one-time exception to city policy and not paying in advance on postemployment benefits, saving about $3.42 million, and to spend general fund reserves down by $532,149.

Council member Jael Myrick said he was more in favor of a recommendation the unions made last week to delay the replacement of police vehicles, adding up to about $880,000 in potential savings. He said several of the suggested freezes on vacant positions were for extremely important positions, including a police records specialist and accountant.

Interim Police Chief Bisa French has said at past meetings that the Richmond Police Department has no accountants despite being budgeted for two accountant positions. Because of this, French works directly with the city’s finance department to manage the police budget.

Willis made a motion to adopt the union balancing proposal E, excluding the reductions that have already been made by the city and the freezing of the police lieutenant position. His motion failed 2-5, with Martinez also voting to approve.

Most of the meeting involved a discussion about options for filling the remainder of the budget deficit, with council members reiterating various positions they’ve taken in prior meetings. The only action taken on the budget involved adding the deferment of police vehicle replacements to the list of possible cuts during next week’s meeting, which passed 4-3, with Martinez, Myrick and Willis voting against.

Echoing calls from the public to not defund the library, council member Eduardo Martinez pledged to not cut library services or library workers. He asked the other council members to also make this pledge, though only Willis complied.

Bates said he appreciated the support for the library, but he hoped the council recognized that every department is important and everyone has to take a cut. He said he didn’t want to micromanage and was waiting to hear the city manager’s recommendations next week.

“I can’t make a commitment to the public safety, to the library, to recreation, the swim centers, code enforcement, without hearing what our city manager is going to recommend in the upcoming week,” Bates said.

Myrick said he didn’t see how the council would reduce the remainder of the deficit without union contributions.

“I don’t see a way to get down to finish this number without some union accommodations,” Myrick said. “I don’t know what those accommodations are, and I don’t know how those conversations are going behind the scenes, but I want folks to understand that’s probably going to be a part of this mix.”