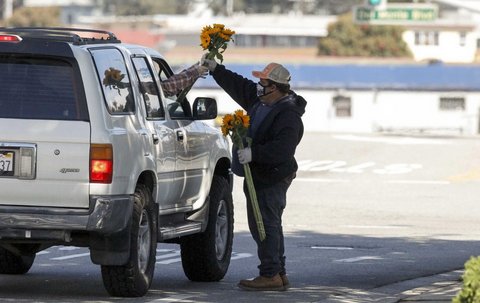 Isidoro Flores Contreras shares a two-bedroom apartment with three other people. He says they would have no way to isolate if one of them got sick. (Vernon McKnight / The Salinas Californian)

This is the final installment in the Close Quarters series. Read Part 1 | Read Part 2

When coronavirus began spreading in California, public health officials told people who fell ill to isolate themselves in their homes for two weeks. But many California families simply can’t do that.

Forced by the high cost of living, parents squeeze into rooms with their children, cousins sleep on couches, grandparents convert living rooms into bedrooms and farmworkers pile into barracks-style bunk beds.

Our CalMatters team, as part of the California Divide, a statewide media collaboration, decided to investigate how these overcrowded homes may be exacerbating the pandemic’s toll on California’s hard-hit communities.

Poverty and overcrowding converge in the same neighborhoods. It’s a painful reflection of how a long history of discriminatory policies have segregated neighborhoods across the country.

To replicate Feldman’s analysis across California, we requested the number of positive coronavirus cases in each ZIP code for 14 California counties with the highest case counts in late May. Ultimately, we analyzed data from 10 counties that gave us the data or posted it on their websites: Los Angeles, Riverside, San Diego, Orange, Alameda, Santa Clara, San Francisco, Kern, Tulare and Sacramento. Four counties — San Mateo, Santa Barbara, San Bernardino and Contra Costa — did not make the data available.

For nine of the counties, the data represent cases by May 25, May 26 or May 27. Tulare County’s data came from May 19. (Los Angeles County uses Countywide Statistical Areas, rather than ZIP code.)

We then paired the neighborhood-level coronavirus data with demographics collected by the U.S. Census Bureau in the annual American Community Survey. We used data averaged from 2014 to 2018, which provides more reliable estimates for smaller neighborhoods. (Note that we did not analyze unincorporated parts of Los Angeles County because they did not correspond to geographic boundaries for Census data).

We used a commonly accepted definition of overcrowding: households with more people than rooms of all types, besides bathrooms.

We also wanted to understand who lives in crowded housing in California. Using a definition of “essential workers” developed by the Public Policy Institute of California, CalMatters housing reporter Matt Levin crunched American Community Survey data from 2013 through 2017 via IPUMS USA, University of Minnesota. To get statistics on health insurance, he used survey data from just 2017. Here’s what he found:

This article is part of The California Divide, a collaboration among newsrooms examining income inequality and economic survival in California.