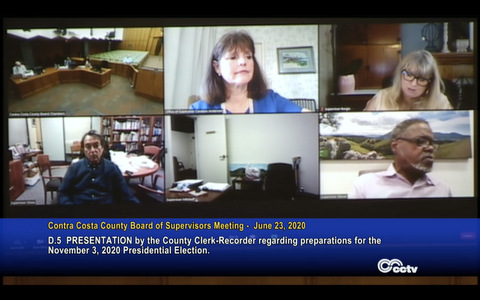 The Contra Costa Board of Supervisors on Tuesday discussed creating an Office of Racial and Social Equity and heard a presentation on equity issues related to COVID-19.

County supervisor John Gioia said a more in-depth discussion about creating such an office will be on the agenda for the supervisors’ July 14 meeting.

Several speakers from the Contra Costa Budget Justice Coalition talked about the state of equity in the county. The coalition advocates for community involvement in the county budget and budgeting principles that support safe and affordable housing, stable employment with fair raises, health care and other issues, according to its website.

Sarah Truhaft, managing director of PolicyLink — an Oakland-based research institute focused on advancing racial and economic equity — said workers of color had been disproportionately affected by the coronavirus.

Truhaft said the county, along with much of the rest of the country, is becoming more diverse, with the population moving from about 58% white to 46% white over the last 20 years.

Truhaft said the coronavirus affects Black, Latino and immigrant communities more, partially because they disproportionately work in frontline industries as essential workers. Workers of color are also hit harder by the county’s unemployment rate, Truhaft said, which rose from 3.1% in February to 14.5% in April.

Before the pandemic, 57% of Latino households and 47% of Black households in the county were financially insecure, Truhaft said, and the most dramatic drop in Bay Area job postings is in nonessential jobs held disproportionately by workers of color.

Truhaft said the county could gain an estimated $15 billion per year in total economic output if it had racial equity in income. She defined equity as “a just and fair inclusion into a society in which all can participate, prosper and reach their full potential.”

She said the budget is a racial equity tool that the county has at its disposal.

“Equity is unfinished business,” Truhaft said. “It’s a moral imperative, but it will also make us stronger.”

Cheryl Sudduth, who is on the budget justice steering committee, centered the discussion on police killings that have sparked waves of protests in cities throughout the United States. She said fighting racism is more than saying words, repeating hashtags, putting up posters and declaring yourself an ally.

Sudduth said marching in the streets is a matter of survival for many people of color who face the “cruel reality” every day that when the Constitution was written, “we the people” didn’t apply to everyone.

“These uprisings are the voices of millions of people who have decided to reclaim their voice and their God-given right to breathe,” Sudduth said. “They’re breaking the silence and they’re finally speaking up and saying enough is enough.”

Dan Geiger, coordinator of the budget coalition, talked about putting a commitment to fighting racial inequality into action at the budgetary level and beyond. He said how jurisdictions decide to use their resources involves inherently moral decisions.

Geiger said they were interested in creating an office of racial and social equity and that the budgeting process should explicitly articulate the values and priorities of people who live in the county.

“Budgets are moral documents,” Geiger said. “In a democratic society, they are the expression of the values of a nation or a country or a city or any jurisdiction, because they say here’s what we think is important. Here’s what we want to devote our resources to.”

Sudduth called for structural reform to police systems, which she said should be reflected in their budgets. Police have often said they aren’t social or mental health care workers, Sudduth continued, saying she agrees officers should not have to do these jobs and instead be able to concentrate on a limited set of responsibilities. Reducing police duties could free up money that she said should go to other services that the community needs such as people who actually are social or mental health workers.

Gioia said he and fellow supervisor Federal Glover are having a growing number of conversations with community groups and foundations about starting a community planning process to create an Office of Racial Justice and Social Equity. He said creating such an office isn’t about re-creating what another city or county is doing but rather listening to community members to find out how it should be done.

“This is not about two supervisors or five supervisors or about the country saying this is how we think it should be done, but saying we need a community process, where many of you doing this work will help inform how it will be done,” Gioia said.