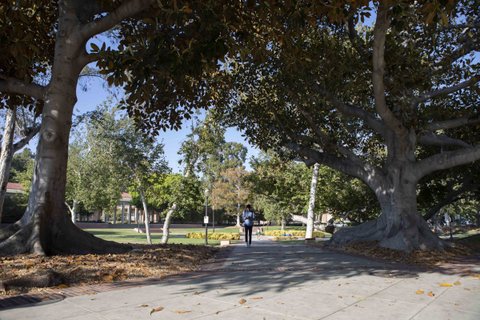 Students at UCLA, shown on Aug. 7, 2019, and other University of California campuses are likely to take few classes in person this fall. (Photo by Anne Wernikoff for CalMatters)

She didn’t want to spend another semester learning online, where she expects all her classes to be when school starts up again late August.

Rayo-Peñaloza, along with her girlfriend and a few of her other friends, weighed her options, considering the likelihood of finding work during a pandemic and what a pause would mean to her financial aid, and ultimately decided she’d remain a student in the upcoming school year. “It was a hard decision to just say that we’re definitely going to go back in the fall.”

She also thought about returning to campus in the fall, but will remain at home in Orange County, where she attended community college before transferring. That decision too was tough. “It’s really difficult to concentrate back home,” she said. “‘Are we hurting our GPAs?,’ that was our biggest concern,” she said of the conversations she and her girlfriend had. But going back to campus meant taking out a loan, “and I really don’t want to do that.”

So far eight of the nine undergraduate campuses of the University of California system have published their plans for fall term, with most estimating that only a small number of classes will be conducted in person.

UCLA, for instance, predicts that just 15% to 20% of courses will take place fully in-class or in a hybrid format, and the rest will be taught remotely, while UC Merced expects 20% to 30% of classes to be in-person in the fall. Several campuses, including UC Merced and UC Berkeley, plan to end any in-person instruction on Thanksgiving and shift all learning online through the end of the fall term.

The campus guidelines contrast with what UC President Janet Napolitano said in May, suggesting more classes will be conducted in-person with a hybrid model. Instead, the UC plans look more like what the larger California State University has been signaling since the spring: mostly online.

Louis Susunaga, a 21-year-old student at UCLA, said he’s returning in the fall but taking three courses rather than four because he’s worried professors again will overwhelm him with assignments.

He said one of his professors last quarter assigned per week more than 100 pages of reading, multiple reading responses, a Zoom meeting with a group project and a pre-recorded lecture. “That’s way more than a normal load, when we were in person.

UC students living on campus should also expect to wear masks in most areas, practice regular social distancing and track any symptoms to help spot early signs of novel coronavirus infection. Several campuses outlined reductions in how many students can live on campus, citing the risk of disease spread as one reason to limit rooms to one or two occupants.

At UC Merced, students living on campus and others on the university grounds will have to report symptoms through an app — currently in development — and undergo viral testing. They’ll have to wear masks, remain six feet apart from others, sneeze or cough into an elbow or tissue and self-isolate if they’re showing coronavirus symptoms. The university will set aside “isolation rooms” for individuals who test positive or are showing COVID-19 symptoms.

Students at UC Riverside will have to clean chairs and tables they occupy with wipes that will be available in actively used classrooms. Beyond standards like social distancing and wearing masks, in-person classes will have assigned seats and instructors will take attendance to minimize the virus spread and help with tracking if someone in the class has a positive coronavirus test result. But the university’s guidelines also state that instructors should avoid attendance-based grading “to reduce pressure on students to attend class when they are not feeling well or should be isolating.”

The university campuses are planning for reduced occupancy at their dorms, limiting rooms to one or two students at most to limit the potential spread of coronavirus. Most have said they plan on prioritizing giving housing to students with the greatest need, the criteria for which varies by campus (like students who get financial aid, veterans and former foster youth).

Even students who do get on-campus housing will need to show proof of a negative coronavirus test, per systemwide guidelines. UC Santa Barbara may — it hasn’t made up its mind yet — also ask students not to travel away from campus during the fall term.

The caps on students in dormitories, extra cleaning, and risk of seeing fewer students in the fall all add to the university’s fiscal anxieties. Through May, the system has absorbed a $1.54 billion hit in added costs and lower revenues, and about $1 billion of that is the result of losses and new expenses in the system’s medical enterprises. “This is a daunting number,” said interim CFO of the UC Paul Jenny during a UC Regents meeting on health June 17.

Adding to the hardship of planning for a possible spike in COVID-19 cases is the prospect of large budget cuts due to declining revenues from housing and food services, and cuts in state support during a grueling state fiscal period. The system faces a cut of $300 million from state money meant for student instruction in a budget deal between lawmakers and Gov. Gavin Newsom — unless the federal government comes through with another stimulus package.

Some schools have been hit financially harder than others. UCLA lost $151 million in revenue through May 31 due to cancelled housing and dining contracts and lost enrollments, according to a COVID-19 cost impact report the system sent to the state’s Department of Finance. The school also spent $18 million to make distance learning feasible. That’s more than twice as much as the $70 million UC San Diego incurred in pandemic-related expenses and lost revenue, the next highest amount among the campuses. Those figures exclude the schools of medicine, clinical operations and medical centers.

“This is the most complex planning exercise we have ever done,” UC Berkeley Chancellor Carol Christ said during a campus video chat last week. “We simply don’t know what is going to happen.”