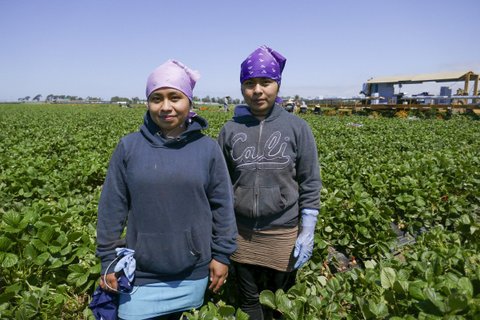 28 Jun For Some California Teens, School Closures Led to Work in the Fields

Since their high school closed, sisters Maria, left, and Jennifer Salvador would work on a farm during the day, missing out on lessons, before doing homework at night. (Photo by Elizabeth Aguilera for CalMatters)

Sisters Maria and Jennifer Salvador start their days before the sun. The Southern California teenagers report to work at an Oxnard strawberry farm with one goal: to harvest as many bright red strawberries as they can.

Each 20-pound box of stemless strawberries they collect brings in $3.

In the evenings when school was still in session, albeit remotely — and after chores at home were done — Maria and Jennifer turned to their school work. The two relied primarily on their father’s cell phone because the school district’s hot spot didn’t work in their Oxnard neighborhood.

“It has gone badly for me,” said 16-year-old Jennifer about remote learning. “It’s not the same because it’s difficult to know how to do the work that the teachers send. You can’t ask questions. It’s like being all alone.”

Like many students in California’s agricultural communities, the Salvador sisters’ personal and educational lives have been upended by the coronavirus pandemic.  When the health crisis interrupted education across the state, closing schools in March and moving learning online, many of these students went to work in the vast green fields that feed much of the country. Jennifer and her 19-year-old sister, for instance, missed out on live digital meetings with their teachers and small group meetings that took place while they were curved over strawberry plants, sifting for the ripest berries.

This poses a challenge for California schools whose migrant students fell behind this spring. As fall approaches, administrators and teachers are scrambling to figure out how school will look amid the ongoing pandemic  — and how to help these students return to classes and catch up. Advocates worry some students could decide to continue working instead of going back to school if they feel they have lost their educational footing.

In Oxnard, where Maria and Jennifer are students, school district officials knew the fields would beckon students whose families already live on the economic edge.

“We absolutely saw this as an outcome of the school closure,” said Tom McCoy, assistant superintendent of educational services at Oxnard Union High School District. “We are working to make sure they have a chance to make up those classes and help them do that once we get set up again. It’s really about being as flexible as we can be to keep the kids connected with their schooling.”

McCoy said a committee is studying options, including making school viable for students who may need to work. The district is planning to extend office hours, and to require that digital meetings be recorded for later viewing. Shifting to a quarter system is also on the table, he said. Quarters allow students to take more classes overall but focus on three to four classes each quarter instead of six or seven throughout a semester.

Classes on weekends and evenings also may be offered, McCoy said.

So far, state-issued guidance for returning to schools focuses mostly on pandemic safety – social distancing and taking temperatures, for instance — rather than offering recommendations for how to support students who have fallen behind. The state Department of Education guidance outlines three possible models for bringing students back that include distance learning, in-class small group instruction and a hybrid of the two.

Advocates worry the virtual or hybrid models could keep students in the fields and affect their education long-term.

Statistics on how many students worked in the fields because of pandemic-related school closures are non-existent.

Federal regulations allow kids as young as 12 to work in agriculture as long as school is not in session. Those who are at least 16 and not enrolled in school can work any time.

A U.S. Government Accountability Office report, released in 2018, found there were nearly half a million youth in the U.S. under 18 working in agriculture in 2016, including on their own family farms. California is home to the largest share of minors working as hired crop hands.

Concerns about children working in agriculture during school is part of a larger issue. For decades, efforts have been made to raise the age limit because of the perils of pesticides, back-breaking work and dangerous equipment that has maimed or killed children.

“The law says students can’t work during school hours, but there are no hours going on right now so many of them are working,” said Kendra Moesle of the Association of Farmworker Opportunity Programs and Children in the Fields Campaign. “It’s really going to impact education because they are not focusing on school work and, secondly, there is the physical danger.”

The dilemma is playing out in agricultural communities from Imperial County on the southern border to Monterey on the Central Coast to Butte County in Northern California.

Students went to work because their parents’ jobs were lost or reduced or because parents got sick, said Yvette Irving, superintendent of the Gonzales Unified School District, in the Salinas Valley.

“Our migrant students don’t sit idle in the summer,” she said. “So this just expedited things and did not allow them to finish the semester of their high school program.”

Irving said her district’s priority is bringing the students back to in-person instruction, but it will provide distance learning for those who need it.

“We are concerned about getting them back on track in a traditional classroom setting with daily teacher-to-student interaction and making sure they have all the prerequisites they need to go on to college or a different aspect of the workforce,” Irving said.

Monterey County is home to the largest share of migrant students enrolled in the program in California, with more than 11,000 youths ages 3 to 21. But the program only supports students whose families move for work every three years. Many of the teens also work.

Since March, counselors and case workers met with students, set up learning plans and provided late-night support. The program gave all students access to an online tutoring program and hired extra teachers to teach math in the evenings. Toward the end, like most students, the kids dropped off but the outreach will continue into summer and the new school year, said Prather-Smith.

She said she is even more focused on how to lure students back to school and wants the district to offer quiet spaces for students to use for remote learning, much like a traditional study hall with social distancing.

“The longer they are disengaged from it the harder it is to ask them to go back,” she said. “We have to be more enticing than the money they are going to make.”

As an added challenge, a growing number of California’s farmworkers have come from indigenous communities, mostly in Mexico, who speak dialects including Mixteco. This can make it more difficult for families to engage with schools, said Arcenio Lopez, executive director of the Mixteco/Indigena Community Organization Project, an organization founded to help the indigenous farmworkers.

“Our students are not feeling like they will be able to enter the university or college and we are seeing a lot of emotions and stress and mental health issues,” said Lopez. “They are very stressed.”

Carla Diaz, 16, is from one of these families.

For her, schooling began once she returned home from the raspberry orchards in Oxnard where she toiled alongside her mother.

A couple of classes scheduled virtual meetings after 5 p.m. but mostly she communicated only by email — a wearisome task, as Mixteco is her first language, Spanish her second and she is learning English. But she did it, keeping an eye on her A average.

“I miss my teachers, I miss the extra counseling,” said Carla, who is the fifth of 10 children.

Her parents have little education, she said, and while they want her to have success they can’t help her with homeschooling.

“My mom says I have to work for a better future, because she doesn’t want us to suffer like they have,” said Carla. “They didn’t go to school and that’s why they work in the fields.”

Carla and the sisters are members of a youth group called Tequio, focused on getting kids from the fields to college and is run by the Mixteco/Indigena Community Organization Project.

The Salvador sisters vow to return to school but for now, they are the sole earners for their family of nine.  Their mother had a baby just weeks ago and their father is caring for them.

With only their eyes showing above a bandana and below a baseball hat, they focus only on the strawberries, swooping their hands into plants to cut the berries with sharp metal tubes wrapped around their thumbs.

Older sister Maria can turn in 50,  20-pound tubs of strawberries a day; Jennifer aims for 30.

“I haven’t learned anything during this time, it’s very sad,” said Maria Salvador, who graduated from Hueneme High School on June 12. “It’s very hard to work in the fields. I want a better future.”

She hopes to enroll at Oxnard College in the fall.