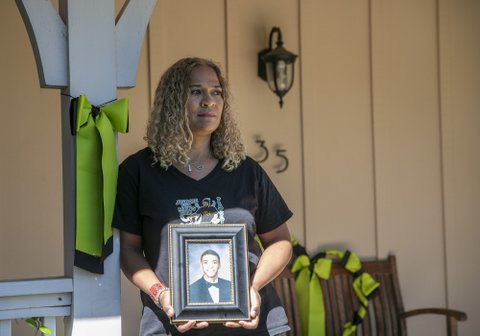 05 Jul Who Responds to Nonviolent Crises? New Urgency to Remove Police From the Equation

Posted at 10:00h in Police by Danielle Parenteau-Decker 0 Comments

Taun Hall holds a photo of her son Miles Hall who was killed by Walnut Creek police during a mental health crisis. The green ribbons on her porch are a symbol of mental health awareness. (Anne Wernikoff / CalMatters)

On the afternoon of June 2, 2019, psychosis convinced 23-year-old Miles Hall that a long iron gardening tool given to him by a neighbor had morphed into a staff gifted from God, his mother said. He used it to break his parents’ sliding glass door.

Looking for help, Miles’ grandmother, his mother and several neighbors called the police, explaining that Miles had serious mental health issues, according to recordings of 911 calls. Officers found him on a tree-lined street in the swimming-pool studded neighborhood he’d grown up in. As he ran toward the police, video footage shows, they shot him first with bean bags, then — when he didn’t slow down — with handguns. The Walnut Creek Police Department did not respond to calls for comment for this story.

A little more than a year after Miles died, his mother is lending her voice to AB 2054, which would create pilot programs to remove police from the response to crises involving mental illness and homelessness, as well as natural disasters and domestic violence. The bill seeks $10 million to fund up to a dozen pilot programs around the state. It would be administered through the state’s Office of Emergency Services.

It’s one of a series of efforts underway at the local, state and national levels to reimagine who responds to people in crisis, and to take some of that responsibility out of the hands of law enforcement. Many of these efforts have been years in the making, but have been injected with renewed urgency since Minneapolis police officer Derek Chauvin pressed his knee down on George Floyd’s neck for 8 minutes and 46 seconds in May, killing Floyd and sparking protests across the country.

Many cities are moving ahead already. San Francisco Mayor London Breed announced last month that trained, unarmed professionals will soon replace police officers in responding to noncriminal crises involving people who are homeless or have mental illness, among others.

Sacramento Mayor Darrell Steinberg has pledged to reallocate some police resources so that non-law-enforcement personnel can respond to such calls.

The Los Angeles City Council voted unanimously on Tuesday to have the city develop a model for unarmed crisis response that would divert nonviolent calls for service away from the police department.

This month, the Federal Communications Commission is scheduled to designate a three-digit number, 988, to reach the National Suicide Prevention Hotline.

Many police officers have said for years that they’d prefer that someone else respond to nonviolent crises. San Francisco’s police chief has expressed support for Breed’s proposal.

Brian Marvel, president of the Peace Officers Research Association of California, said he has advocated for a decade that police should not be the primary responders to calls related to homelessness or mental health.

“Unfortunately, with city budgets and the societal ills that we face, it all gets dumped on police,” he said. “It seems to have fallen on deaf ears. But it appears now that they’re taking it seriously.”

Those involved in longstanding efforts to transform California’s crisis response system are quick to acknowledge that the proposed state pilot programs aren’t enough. They want mobile teams that respond to people in crisis, as well as places for short-term treatment and long-term recovery. To endure, that would require sustainable funding, possible regional collaborations among smaller counties and committed leadership. Ultimately, it would also include a strengthening of community-based mental health services, so fewer people end up in crisis in the first place.

Steinberg, who carried legislation in 2013 to expand mental health crisis systems statewide, said he’d hoped the state would be further along by now in developing alternatives to police and emergency rooms. His bill had designated about $200 million in new funding for crisis programs; he had hoped the program would prove so successful the funding would continue. Marshalling new resources amid a pandemic-induced budget crisis is tough.

Miles Hall’s family also is helping push Walnut Creek to both create teams of clinicians who can respond to people in mental health emergencies, and to require police to undergo crisis intervention training.

Taun Hall wishes such a team existed the day her son was killed.

The 911 tapes offer a glimpse of a family in search of help.

“Miles, my grandson, is having a mental health breakdown,” his grandmother can be heard telling the dispatcher, breathlessly, as Miles shouts in the background.

Neighbors called too, as did Taun Hall, all noting Miles had psychiatric issues.

He had started showing signs of psychosis in his late teens. Still his mother recalls him as a self-taught musician who was so gentle he wouldn’t even kill spiders.

Three days after Miles’ death, the Walnut Creek chief of police released a statement: “My heart goes out to the family of Miles Hall as this was an outcome nobody wanted to have happen,” he said.

Cat Brooks, co-founder of Anti Police-Terror Project, remembers being surprised when Taun Hall approached her at an event just weeks after Miles was killed, wanting to help lobby for change.

“She came out of the gate ready to fight for her baby,” Brooks said.

Last year Brooks had worked on a bill that became law narrowing the circumstances under which police officers are permitted to use lethal force. Removing police from crisis situations seemed to her an obvious next step.

“We rely on police to be the answer to every single social ill and they shouldn’t be,” she said.

“Their job is supposed to be responding to instances where we as community members are in danger.”

Along with organizations such as PolicyLink, the Alliance for Boys and Men of Color and the American Civil Liberties Union, they brought the idea to Democratic Assemblymember Sydney Kamlager of Los Angeles.

To Kamlager, the need for the bill felt both evident – and personal. Over the years, she has carefully reviewed tapes of lethal interactions involving law enforcement and, often, Black people.

“It’s really traumatizing to see yourself over and over again being dehumanized,” said Kamlager. “They’re not me but they either look like me or my husband or my stepson….I’m desperately trying to find policy that’s thoughtful that stops treating Black people like we’re problems.”

When she introduced the bill this past January, California’s economy was humming and the governor was outlining visions of reimagining the state’s mental health care system. Still, Kamlager worried the proposal would strike some as too radical.

A few months later, the pandemic hit, the economy tanked and the government suddenly faced the prospect of massive cuts—all of which might have made such a bill less likely to pass.

“I think communities know what they need and they know how to hold themselves accountable,” Kamlager said. “They just don’t have the tools.”

While the bill has no funding attached to it yet, Kamlager is hopeful the state will include the money in a revised budget come August.

California has been talking about reforming its crisis response system for a long time — and state leaders have been considering a number of potential models. Many agree that pilot programs, while useful, often fall short of creating system-wide change.

“These are not problems that require a huge amount of research or pilot projects,” said Dr. Tom Insel, chair of The Steinberg Institute and formerly Newsom’s top mental health advisor. “We know what works and it requires making the investment. If you’re serious about this, you do it at scale.”

Insel has been championing  a program called Crisis Now as a potential model for counties in California. That program has been tried in other states with promising results. In Maricopa County, Arizona, the program’s organizers estimate they have reduced overall healthcare costs by $260 million. The creators have come up with detailed formulas that would also allow counties to use federal funds to sustain the programs.

Jim Mayer, chief of innovation incubation for California’s Mental Health Services Oversight and Accountability Commission, says they are planning to try out this model in eight to ten counties later this summer.

Other advocates, including Taun Hall, are looking with interest to the three-decade old Crisis Assistance Helping Out On The Streets — or CAHOOTS — model in Eugene, Oregon. In that program, an unarmed medic and mental health worker respond to the calls that come into police dispatch about mental health crises and potential overdoses.

Brooks wants to see communities remove police from crisis response entirely. One model for what a state pilot program might look like can be found inside a secondhand RV in the Sacramento neighborhood of Oak Park.

This past January, Asantewaa Boykin, a registered nurse in the UC Davis Medical Center emergency room, worked with the Anti Police-Terror Project to start an entirely volunteer crisis response operation in Sacramento called Mental Health First.  Boykin said the effort grew out of an informal, unspoken agreement among many in her community – when people were in crisis, they reached out to each other, not the police.

Now, three nights a week, from 7 p.m. to 7 a.m., a rotating team of three volunteers — one focused on crisis intervention, one on medical response and one on safety — responds to calls and texts from people in mental health crises.

Sometimes these crises are easily handled with reassuring words over the phone. “A lot of times folks just want to talk or text,” Boykin said. A cup of noodles and a blanket and someone to listen fixes many situations.

On occasions when a crisis requires a trip to the emergency room, a trained volunteer explaining the situation to hospital staff can make a huge difference in how a patient in crisis is treated, Boykin said.

The team relies on word-of-mouth, social media posts and flyers to spread the word about their work. Boykin estimates they’ve spent less than $2,000 total so far. With more funding, she said, “I think the possibilities would be endless.”

This report was made possible by a grant from the California Health Care Foundation.