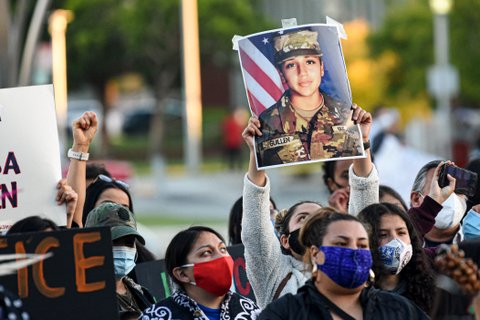 Posted at 23:44h in News by Pulse Editor 0 Comments

The protest began July 7 with a vigil after a caravan of vehicles paraded through Richmond to City Hall. There, a traditional Aztec group prayed through dance as part of a vigil and speakers shared their experiences.

“It could have been me,” said Estefany Sanchez, who was also in the Army. “I was sexually harassed by two sergeants.”

Sanchez, who served at Military Ocean Terminal Concord for five years, said she was sexually harassed on two different occasions, once off the base during training and another time on the base. Those incidents brought fear, depression and negativity into her life and made her shut down. She said the base gave her no place to heal.

And when Sanchez was ready to report the incident, she was told by the ranking officer to “suck it up and move on,” she said.

The disappearance of Guillen, whose death was confirmed Monday, has prompted many current and former service members to open up about being sexually harassed or assaulted while in the military. Guillen’s family has said she was harassed by superior officers, but officials at Fort Hood, where she was stationed, have denied the allegations or that they have any connection to her death.

Just as she and Guillen felt fear, Sanchez says the larger Latino community is afraid to protest over the death of one of their own. And that one protest is not enough to make a real impact.

“If this is a one time thing, it will die out,” Sanchez said.

Therefore, with the help of Richmond community leaders Diego Garcia and Gonzalo Rucobo, the Sanchez sisters have challenged themselves and the community to come out every day from 6 to 8 p.m. for a ceremony with cultural performances, free food and speakers at the steps of City Hall. 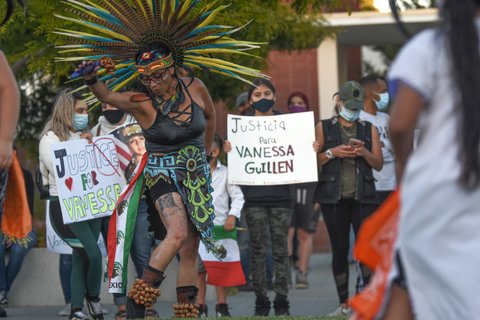 With banda music, Aztec dancers and prayers, hot chocolate with sweet bread and much more, the ceremonies are also a celebration of Latino culture. The more the community is centered in their way of life, the more they will fight for it, Garcia said.

“We are not here to make noise, we are here to build a movement,” Garcia said.

Organizers hope that the ceremony can bring thousands of people together to demand an independent congressional investigation into Guillen’s death, an end to military recruitments in low-income communities and that Congress pass a bill, named for Guillen, to protect military sexual harassment victims who come forward and report their abusers.

On Tuesday night, brothers Jose and Carlos Perez of San Pablo set up two tents and have been occupying the Civic Center Plaza. By the next night, there were eight tents set up for protesters to camp out overnight as more people joined the occupation.

“Don’t wait for action,” said Jose Perez during his first night at City Hall. “Be the action.”

He and his brother did not expect to be the first ones to set up tents, but that didn’t stop them. Now as the third night approaches, they feel pride in taking a stand for Guillen in a way they never imagined they would — sleeping at City Hall.

The brothers expect to stay there throughout the week and beyond but don’t have a date when they will pack up.

“We are here for Vanessa, for everyone that has been silenced unfairly and to bring attention,” said Carlos Perez. 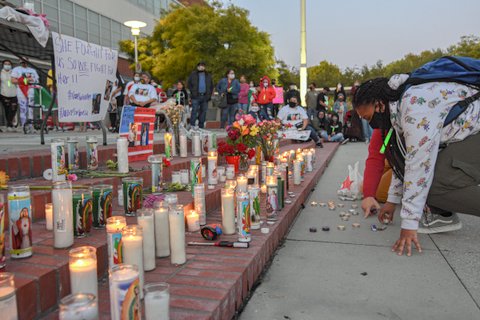 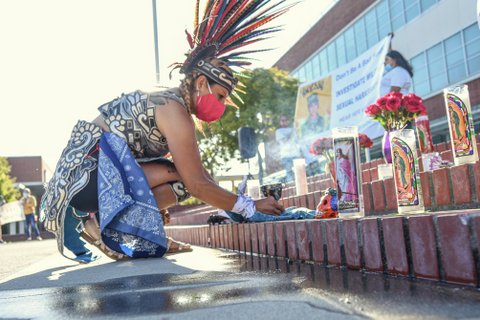