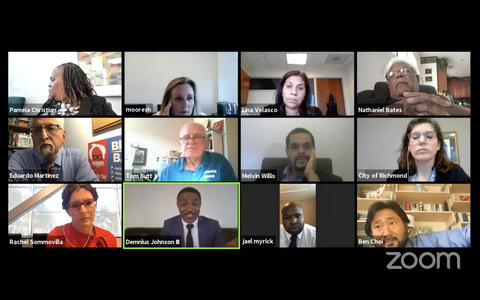 Council member Demnlus Johnson said the city should not consider ending its eviction moratorium during the coronavirus outbreak: “We can’t legislate the end of a pandemic.”

The Richmond City Council on Tuesday extended an order that established a moratorium on evictions for nonpayment of rent to Sept. 30.

Additionally, the council voted to have city staff move forward with drafting a tax on gross receipts for the November ballot, which staff estimates will raise $4.9 million if passed.

On July 14, the Contra Costa County Board of Supervisors extended a similar county ordinance to Sept. 30, the length authorized by an executive order from Gov. Gavin Newsom earlier in July. The Richmond order takes priority in the city, but if the council chooses not to extend their order at any point, the county’s ordinance would entirely come into effect.

One impact of ending the city order is that it gives renters a 12-month grace period to catch up on unpaid rent starting after the order expires, while the county ordinance gives a grace period of four months.

There are two other significant differences between the city and county protections. For one, the Richmond eviction moratorium applies to all commercial properties, while the commercial side of the county ordinance applies only to small businesses and nonprofits. And under the county ordinance, landlords are able to evict tenants so the landlord or their immediate family can move in — which is only true for Richmond’s order if the eviction is necessary for the health and safety of tenants, neighbors or the landlord.

Snideman said she was asking the council to decide whether to extend the order because she felt uncomfortable making the decision again, as the city hasn’t found a good way to give relief to landlords.

Most of the council agreed with the extension, and council member Melvin Willis moved to extend the order to Sept. 30.

Council member Demnlus Johnson said it was silly to consider ending the moratorium while COVID-19 cases continue to rise. He said he applauded the city manager for trying to keep city policy and potential legal issues in mind, but there was no way the issue would not keep coming up.

“We can’t legislate the end of a pandemic,” Johnson said. “Whatever we do, I just want everybody to know we’re going to have to revisit this.”

Bates said he agreed with Martinez that they can’t just give relief to renters without demanding that the government step in, specifically to help mortgage holders and landlords. He motioned for the city to adopt the county ordinance and direct the state and congressional leaders to take action on providing relief for landlords.

Willis said he wouldn’t vote for Bates’s substitute motion because of the difference between the county and city in recovery time. The substitute motion failed 2-5, with Butt and Bates voting to approve. The council then passed the original motion.

Representatives of the polling firm FM3 Research and the consulting firm Telegraph updated the council on polling to test the likelihood of passing a tax measure on the November ballot. The revenue would be used to maintain essential city services, according to the presentation.

A vacant property tax requires a two-thirds majority vote to pass. Ballot language used for polling suggested an annual rate of $3,000 for developed parcels and $6,000 for undeveloped land, which would raise about $5.4 million for the city each year, according to the presentation.

A real estate documentary transfer tax applies when properties change hands. Changing the tax requires a simple majority vote to pass. The presentation suggested the city stood to earn about $1 million annually from amending this tax.

A gross receipts tax applies to total gross revenues of a company and requires a majority vote to pass. In ballot language that Del Puppo presented, the tax is structured with a range of 0.075% to 1.34%, charging the highest rates on businesses with the most revenue and exempting businesses with gross receipts under $250,000. The tax, as selected by the council, would provide approximately $4.9 million to the city.

Katrinka Ruk, executive director of the West Contra Contra Costa Council of Industries, said businesses need more time to review the economic impact of the tax. She said she’d like the council to set up a committee to review the tax before it goes on the ballot.

Ruk warned the council that, due to the tax, several businesses were considering relocating out of Richmond. Because of the pandemic, Ruk said, many employees aren’t working in their offices, making moving away from Richmond easier to consider.

Myrick later amended the motion to reach out to the business community, specifically the Council of Industries, before the meeting next week and for staff to shape the drafting of the tax based on feedback.

The council approved Myrick’s motion unanimously. The council has until Aug. 7 to approve the tax. Several council members said they were open to meeting in August, if need be. The council is set to vote on the tax next Tuesday.