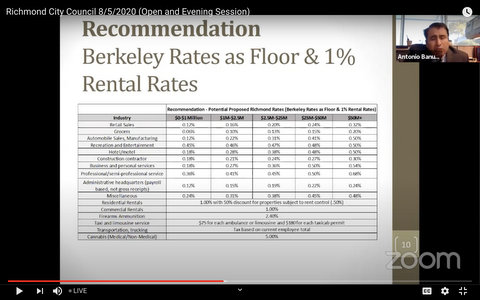 Richmond residents will be asked to vote on a proposed gross receipts tax modeled after one in Berkeley.

A gross receipts tax predicted to raise $3.2 million is headed to the November ballot after a majority vote Wednesday by the Richmond City Council.

A gross receipts tax is progressive, meaning that the amount of tax paid increases along with the size of the business. The council approved a tax modeled after one in Berkeley on a 4-2-1 vote — with Mayor Tom Butt and council member Nat Bates opposing, and council member Demnlus Johnson abstaining.

As a friendly amendment to the motion, made by council member Melvin Willis, Butt added that a working group to explore any revisions would be established if the tax passes. The council has power to reduce tax rates, as needed.

The tax as a whole is calculated in tiers. Most businesses making under $250,000 in gross receipts would be exempt from percentage rates and pay a base rate of $200, according to a staff presentation. Once the gross receipts reach a certain threshold, such as $1 million for a business in the “retail sales” category, the tax rate for receipts earned over that amount would rise from 0.12% to 0.16%. The original $1 million would stay taxed at 0.12%.

Richmond’s current payroll tax model, which would be replaced by the gross receipts model, requires most businesses to pay a base rate of $234.10. The rate rises for each employee — by about $47 for each of the first 25 employees, and about $40 for each additional employee. Some businesses already pay taxes based on gross receipts: Marijuana businesses pay a 5% tax, while movie theaters pay 0.3% of revenues over $20,000, according to the staff presentation.

The ordinance also includes a proposed change to residential rental property taxes, charging 1% of gross receipts, with a 50% discount for properties subject to rent control. Currently, all properties, no matter the size, are charged $234.10 per location.

The city council discussed and moved forward on the tax during two council meetings at the end of July. On July 28, the council directed staff to bring back the ordinance with a progressive schedule based on the Berkeley model but tailored to the economics of Richmond.

The business community gave feedback during those meetings, with many opposing the measure because they said the process felt rushed or felt the tax was poorly timed, given the impact of COVID-19.

Several speakers from the business community also showed up to voice their concerns in public comments. Katrinka Ruk, executive director of the West Contra Contra Costa Council of Industries, said they couldn’t support the measure, and recommended the city delay passing the ordinance to meet with businesses of all sizes so they can provide input.

She said the business community only had 24 hours to review the current rates structure, which wasn’t enough time.

“Overall, this is ill-timed during the current pandemic where many Richmond businesses have been impacted,” Ruk said.

Some public commenters recommended the council move forward with the tax. Mike Parker said that if voters pass the tax, the city will only get revenue in two years, which means that a delay to putting it on the ballot, as some in the business community suggested, would be more impactful than it seems.

Butt proposed that the city use its current tax model and double the rates. He said he’d talked to members of the business community who said they’d be fine with that, and doubling rates would raise an additional $3 million, roughly the same amount as the suggested gross receipts tax.

Bates said the tax was “ill-conceived” and would hurt businesses suffering from the COVID-19 pandemic. He warned about businesses pulling out of the city if tax rates are too high.

“What we need to do is try to be stable as much as possible and wait and see what’s going to happen down the road,” Bates said.

Council member Eduardo Martinez said he saw the easy acceptance of a 100% tax increase as evidence that the city’s current business tax rate is too low.

“When you see no problem with a 100% increase, that tells me you are paying way too little and you know it,” Martinez said. “I don’t think we should stay in the stone ages of finance just because the people you’ve been talking to want to stay there.”