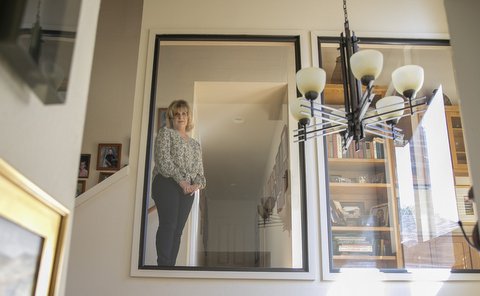 Posted at 07:00h in Health by Danielle Parenteau-Decker 0 Comments

Teresa Pasquini looks into the room in her home where her son, who has schizoaffective disorder, tried to kill himself. (Anne Wernikoff / CalMatters)

There’s an open secret among those who care for people with serious mental illnesses.

Judy Bracken first heard it a few years ago from a hospital social worker: If Bracken wanted her adult son, who has schizoaffective disorder, to receive long-term mental health treatment, she should get him off her private insurance, UnitedHealthcare, and onto the public system for low-income people in Contra Costa County.

Lucinda Chiszar figured it out when she tried to take her then 10-year-old son, who was insured by Aetna, to the only nonprofit agency in Merced County that offered the intensive wrap-around services the county’s behavioral health services said he needed.

Other families say they hear it whispered by well-meaning caseworkers, or even directly from the health plans themselves.

“If someone was to develop lung cancer, it’s hard to imagine that one of the other insurers would say, ‘You’re going to need to get on Medi-Cal to get that paid for,’” said Dr. Tom Insel, former director of the National Institute of Mental Health, who has advised Gov. Gavin Newsom.

Such stories provide further fodder for the debate about how to best enforce the state and federal parity laws that guarantee patients equivalent coverage for physical and mental health treatment.

They also reveal the limits of those laws. In many cases, commercial insurers aren’t legally required to offer the intensive mental health services available through Medi-Cal. This open secret exposes troubling questions: What should private insurance cover? What should the state — and thereby taxpayers — pay for? Who’s responsible  for ensuring people with serious mental illnesses get the treatment they need?

Counties that administer Medi-Cal are tired of it. “We’ve let the private commercial plans off the hook pretty significantly,” said Michelle Cabrera, executive director of the County Behavioral Health Directors Association of California. “It’s time for a come-to-Jesus conversation.”

Mary Ellen Grant, spokesperson for the California Association of Health Plans, said she surveyed the commercial plans represented by her organization and none were familiar with the phenomenon.

“We’re not aware of any existing evidence that long-term mental health care needs are better served by county mental health agencies, nor in which counties this alleged trend is happening,” she said.

And, yet, many insist that’s exactly what’s happening. Los Angeles attorney and psychotherapist Meiram Bendat says he’s seen, through cases he’s taken on, that insurers not only know about the issue — which he likens to “patient dumping” — but sometimes actively encourage it. He calls the practice prevalent, “simply inexcusable” and, in his view, against the law.

“It is not something that regulators in California are actively looking into,” he said. “As a result, they are not protecting the interests of the taxpayers and are allowing the insurance companies to enrich themselves by pawning off their most severely compromised and sickest members to the public welfare system.”

Some mental health services that counties provide, including wrap-around programs and case management, aren’t legally required to be offered by commercial health plans.

But Mary Watanabe, deputy director of health policy for the state Department of Managed Health Care, said state law usually requires commercial plans to cover medically necessary early psychosis intervention and residential treatment. She emphasized that patients who think they are being denied necessary treatment should file a grievance with their health plans and contact the department’s help center to request an independent medical review.

No one keeps data on how often people feel forced to abandon private plans because the public system for poorer patients provides better options. But Dr. Joe Parks, medical director of the National Council for Behavioral Health, calls it “a national issue.”

Parks says private insurance historically hasn’t been set up to offer case management, help with transportation and other services to help people navigate to needed treatment.

“If you get old and sick or disabled and sick, then you leave commercial insurance,” he said. “It’s really Medicaid and Medicare that back up the commercial sector and allow them to have the profit margin that they have.”

Many people with serious mental illness don’t intentionally decide to drop off of commercial insurance. Rather, the illness itself — especially if it’s inadequately treated — can lead them to lose their jobs, which then lands them on Medi-Cal.

But for some families and individuals, deciding to leave commercial insurance can be agonizing.

Parents with children 18 or older often can just drop them from their private plan to make them Medi-Cal eligible. But that may entail giving up relationships with providers they’ve known for years, and forgoing easier access to specialists who treat other complex medical conditions.

And then there’s the question of shame.

Teresa Pasquini, a Contra Costa County mother whose adult son has schizoaffective disorder, moved him off of Kaiser Permanente in 2010 after years of fighting to keep him on it. By then, Pasquini said, her son had attempted suicide multiple times. On many occasions, she’d hidden in the back bedroom, calling 911 in a whisper, waiting for authorities to handcuff her son to keep him, and his family, safe. Doctors said her son needed to be in a locked residential facility — but his private insurance didn’t cover a long-term stay, so the county had to pick up the cost, she said.

“It’s traumatic to reread the desperate emails I was sending to Kaiser, the county, the conservator, literally begging, ‘What can we do? We don’t want to drop his private insurance, we don’t want to dump his care on the state and county,’” she said. “I gave up my career. We were paying outrageous amounts of money. We were trying everything. So we felt we had no choice.”

People regularly call her agency and ask if they should drop private insurance to get into county programs. “Even with very good insurance, that continuum of care isn’t there for the most part,” she said.

Privately insured people have been treated in the county’s first-episode psychosis program, though Tavano is reluctant to broadcast that, given limited space. Others with private insurance come into the county’s costly crisis stabilization unit, she said, or get help via the county’s mobile crisis response team.

“We’re not going to turn people away,” she said.

But spending more on insured people leaves less to spend on people who are on Medi-Cal or uninsured and very low-income, she said.

Solano County initially accepted people with private insurance into their early psychosis program — until the program was “inundated,” and didn’t have adequate room to serve people with Medi-Cal. The county then restricted it, said Sandra Sinz, the county’s behavioral health director, even though “we know if you don’t offer it, people aren’t going to get help.”

In 2014, plaintiffs in a class action lawsuit against Kaiser Permanente alleged they were told to take their sons off of Kaiser to get them into locked residential facilities. That suit settled in 2018. Kaiser continued to dispute some of the claims.

Later that year, a Kaiser therapist in Solano County, who asked not to be named because she feared being targeted by management, received a message from the company that workers should not tell patients to drop Kaiser coverage and go onto Medi-Cal.

“People with severe mental illness absolutely pay the price,” she said. “They suffer. They absolutely get better care through county mental health.”

She hasn’t voiced that to patients, though.

Stuart Buttlaire, regional director of inpatient psychiatry and continuing care for Kaiser Permanente in Northern California, emailed that Kaiser “offers a full range of long-term, residential or inpatient treatment for members in need of more emotional or psychiatric help than is available in outpatient sessions.” These inpatient stays can range from days to a year or more, he said. He said Kaiser works closely with county mental health agencies through a “public-private partnership.”

It “might have been the case some years ago” that some families dropped commercial insurance to go onto Medi-Cal, Buttlaire said, but “federal parity laws are helping eliminate the need for this.”

Even those concerned about the private-public service gap acknowledge Medi-Cal is no panacea. County services vary, and they, too, face challenges.

A spike in demand for mental health services in recent years has left Medi-Cal and private insurance struggling to get the workforce and infrastructure they need.

Dr. Paula Wadell, medical director of the UC Davis Early Diagnosis and Preventive Treatment Clinic in Sacramento, said Medi-Cal offers many services to her patients that those with private insurance can’t access.

“There’s kind of no way to win for families,” she said.

Once children on private insurance turn 18, clinic staff explain to their families the broader services the clinic provides to individuals with Medi-Cal. Many then elect to move their children onto Medi-Cal.

But once they drop private insurance, Wadell said, “it’s not all rainbows and sunshine.”

For example, a 2014 law requires doctors to submit a treatment authorization request to the state before giving anti-psychotics to kids on Medi-Cal. That can lead to delays in getting urgent medication that don’t happen for privately insured kids, she said.

Young people with complex medical problems — seizure disorders, for example — can find it more difficult to secure a neurologist or geneticist through Medi-Cal, she added.

Katrina Gant, a San Bernardino County mother whose son was diagnosed with schizophrenia after high school, said she heard about a great residential program in the mountains nearby. It wouldn’t accept her private insurance — but it took Medi-Cal.

The catch: Medi-Cal patients had to wait nearly a year to get in. Instead, Gant’s parents sacrificed $8,000 a month for their grandson to attend.

“It was difficult, but to help my son they would do anything,” Gant said. Although her son remains with Kaiser, she plans to switch him to Medi-Cal — despite the waitlists.

So what can be done?

Dr. Henry Harbin, former CEO of Magellan Health, a managed behavioral health care company, said that some private plans lack the billing codes that allow payment for more complex mental health treatments. He’s working on developing a standardized billing code that first-episode psychosis treatment programs can use to bill commercial insurance, and says a similar initiative would do the same for crisis services.

Several California agencies that serve children have begun piloting partnerships with commercial plans. Marika Collins of Casa Pacifica, which serves children and families on the Central Coast and in Southern California, said her organization is working with Anthem and Kaiser to provide the same intensive mental health services to children with private insurance they’ve long provided to children on Medi-Cal.

“I’m just thrilled to say that we’ve done it,” Collins said. “I’m less quick to bash the health plans than I was three years ago. Some of them really get it.”

This story was made possible by a grant from the California Health Care Foundation.