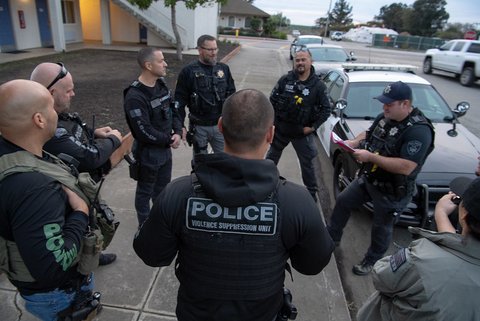 It’s crunch month for California legislators who promised sweeping reforms in response to the police killing of George Floyd and the protests his death unleashed.

Yet some social justice advocates doubt that politicians’ stomachs for change are as strong as their rhetoric: A Senate bill to excommunicate corrupt or misbehaving cops may be denied a floor vote, while another measure to involve the attorney general in certain deadly force investigations is gaining new opposition from those who say it won’t do much if signed into law.

State lawmakers have until Aug. 31 to consider at least 15 bills seeking to reign in, report on and oversee the kind of police violence that ended the lives of Floyd in Minnesota, Breonna Taylor in Kentucky, Rayshard Brooks in Georgia and — closer to home — Andres Guardado in Gardena and Sean Monterrosa in Vallejo in the past year.

Most of the bills will be tested this week and next as lawmakers in both houses determine whether California can afford the price of reform when the state is tapping so deep into its rainy-day fund.

For instance, a bill allowing victims of violent police crimes to pursue benefits through the state could draw $200 million a year from the California Victim Compensation Board’s restitution fund, as well as $700 million in retroactive payouts. Those are expenses the fund probably cannot support, Jolie Onodera, a deputy secretary of legislation for the Department of Finance, told the Senate Appropriations Committee on Monday.

While some bills appear to be carrying enough momentum to survive, Sen. Scott Wiener had a word of caution at a Public Safety hearing last week.

“This is a challenge to the entire Legislature,” the San Francisco Democrat said. “We can’t just have a few wins this year … and then just go back to business as usual.”

The police reform measures churning through a pandemic-shortened legislative session cover a lot of ground:

All but one of these bills are either on a suspense file or headed there this week, meaning they come with a general fund price tag of at least $50,000 and require deeper financial probing. The Senate and Assembly Appropriations committees will decide in the coming days whether to advance them to their respective floors for a vote.

If passed, any bill that has been amended must return to the house where it was drafted for what’s called a “concurrence” vote. Only then can the bills be sent to the governor, who has until Sept. 30 to sign or veto them.

The proposed chokehold ban currently has one of the best chances of winning Newsom’s signature.

Some previously supportive law enforcement groups claim the bill isn’t explicit enough that officers have the right to defend themselves. But the author, Assemblymember Mike A. Gipson, told the Senate Public Safety Committee on Aug. 7 that right is already clear in the state penal code so he didn’t see a need to make it redundant in the bill text.

The tear-gas bill from Assemblymember Lorena Gonzalez received some of the strongest vocal support from the Senate Public Safety Committee, with Sen. Holly Mitchell referencing police abuses of the civil rights era.

“There was a time in history when it was deemed appropriate to use water hoses and dogs and billy clubs to disperse nonviolent peaceful protesters,” the Los Angeles Democrat said. “We are all clear now — 50, 60 years later — that this is not appropriate. And I think through the experience of these most recent protests and the use of these tools, we now are clear that they are not appropriate either.”

A number of policing organizations oppose the bill, which is expected to come with significant costs associated with police retraining and data collection.

A half-dozen bills haven’t yet reached the appropriations committee, narrowing their window to navigate the short legislative session.

This smaller raft of legislation includes a measure requiring guidelines for when officers can try to corral or trap crowds through a technique called “kettling” and prohibiting officers from hiding their badge numbers; a requirement for local municipalities to report annual use of force settlement or judgments; and a bill that would allow county politicians or voters to check the powers of local sheriffs.

One bill that may never get a hearing is SB 731, which was downgraded to the Assembly Rules Committee on Aug. 3 and has yet to resurface. Sen. Steven Bradford introduced his officer decertification measure at the beginning of July to address the fact that California is one of five states without a process to do so.

The Gardena Democrat’s office wasn’t immediately available for an interview, but a legislative insider suggested a provision making it easier to sue officers in court is what’s holding the bill up.

The measure that has seen perhaps the largest shifts in support is AB 1506, which would require the attorney general to review all officer killings of unarmed civilians, as well as any fatal police encounters requested by county boards of supervisors, city councils, district attorneys or law enforcement agencies.

The most recent attorney generals — Xavier Becerra and Democratic vice presidential candidate Kamala Harris — have been reluctant to intervene in such cases, despite already having the authority to do so.

Law enforcement unions are shrugging off the legislation at the same time that a number of progressive organizations are criticizing it as too weak.

As of now, the job of determining whether officers should face prosecution rests with locally elected district attorneys, a process McCarty called “fraught with conflict” because it feeds the public’s perception that the police are policing themselves.

McCarty’s bill represents his third attempt in five years to sideline DAs from deciding whether to prosecute cops who end a life. The Sacramento Democrat patterned his oversight bill after laws in five states, including one signed by Wisconsin’s former governor, Republican Scott Walker. McCarty has repeatedly underscored that fact in presenting his bill as a bipartisan solution to a crisis of public confidence.

A number of law enforcement unions have gotten out of the way of McCarty’s latest oversight bill, either issuing neutral positions or soft endorsements. The California Peace Officers’ Association said McCarty’s bill wouldn’t change much about how deadly force encounters are handled. Local police agencies would still run the criminal investigations, then hand their cases to either a district attorney or attorney general to determine whether a prosecutable crime occurred.

Becerra last year cleared the officers who fatally shot Stephon Clark in Sacramento in 2018, and more recently, his office declined the requests of elected representatives to review a controversial Vallejo police shooting. Those actions have compelled a skeptical left to doubt that an attorney general would behave differently from local prosecutors.

“The attorney general is the top cop and this is just another conflict of interest,” Galviz said.

Communities United for Restorative Justice and numerous other progressive organizations registered opposition to McCarty’s bill unless it completely stripped law enforcement from the process of investigating itself.

Specifically, California Attorneys for Criminal Justice urged the Legislature to create a separate statewide prosecutor’s office to investigate and prosecute wrongful police killings. The prosecutor would answer to an independent commission.

“We do believe that we have to pursue a more independent model,” Ignacio Hernandez, a member of the attorneys group, told a Senate committee. He cited a recently passed Connecticut law that sets up an independent inspector general system.

With an Aug. 31 deadline to pass legislation, lawmakers are unlikely to make any radical changes to a bill that has already undergone a number of friendly amendments. One of those changes involved swapping out mention of the attorney general for an unspecified “state prosecutor,” which cracked the door to a new office being created, though without any promises or plan to do so.

“I guess I’m uncomfortable with the lack of clarity about … whether our intent is to set up something independent,” said Mitchell, who signed on as a co-author to McCarty’s original bill. “That’s a whole kind of different decision-making process if we decide we’re funding the AG to do the work or if we’re standing up a whole different entity.”

McCarty told the committee that issue would be sorted out during next summer’s budget cycle, though Sen. Nancy Skinner, the committee chair, pointed out that McCarty’s bill would go into effect Jan. 1 if signed into law, months earlier.

What that essentially means is the attorney general would have the job until he or she doesn’t.