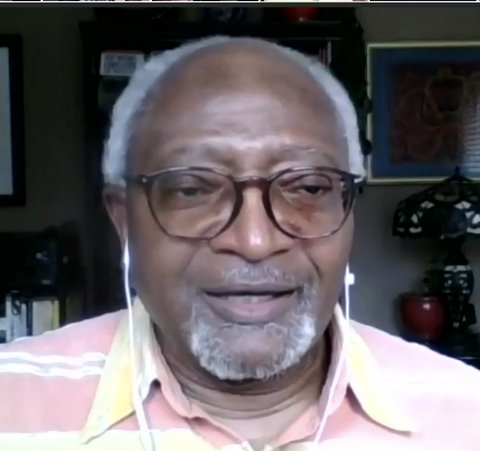 “America is segregated along racial lines even in 2020 and so is pollution,” said Robert Bullard of Texas Southern University during an Ethnic Media Services teleconference. (Screenshot captured by Michael J. Fitzgerald / Richmond Pulse)

People of color and the poor are the hardest hit by the effects of climate change, a panel of experts said Friday.

And buyouts and programs of assistance to help people impacted by climate change-related disasters generally favor the wealthy and white communities in the U.S., not the people who need it the most.

“America is segregated along racial lines even in 2020 and so is pollution,” said Robert Bullard, professor of urban planning and environmental policy at Texas Southern University. And all types of pollution clearly have a bigger negative impact on communities of color, he added.

Ballard, often described as the “father of environmental justice,” made his comments during a one-hour teleconference with journalists sponsored by Ethnic Media Services.

The teleconference highlighted the complicated and cumulative impacts of climate change, particularly when coupled with the ongoing COVID-19 pandemic. During recent hurricanes in the Southern U.S., many people had to deal with serious flooding.

The federal government’s advice was for people to “shelter in place,” Ballard said. “But people in those communities that got 6 to 7 feet of water in your house, you’re gonna drown,” he said. And packing into community shelters dangerously increases peoples’ exposure to COVID-19.

In discussing the ongoing intense wildfires in the Western U.S., LeRoy Westerling, a UC Merced professor of management of complex systems said “climate change is definitely the primary driver” of the blazes.

“Climate change in not a one-off thing that happens, and now you’re done and now you have a new normal,” he said. “There will be no new normal.”

The fires this year — as in years past — are the result of too much fuel in forested areas, an increase in the number of people living on the wildlife-urban border and our increasingly warming climate.

“We need to everything we can to slow down the pace of climate change,” Westerling said.

One way to lower the impact of fires would be to manage landscapes more intensively to reduce the vulnerability of communities, he said.

The absence of water because of the erratic rainfall in California is also a major factor. Just two major late fall or winter storms, or the lack thereof, can mean the difference between a wet weather year or a drought.

The teleconference also included some ominous predictions from Rajendra Shende, chair of the TERRE policy center in India and former director of the United Nations Environmental Program.

Shende said he is concerned how easily the coronavirus brought most of the world to its knees in January while nations continue to deal with climate change.

“I must say we had shamefully unprepared health systems and unrealistic knowledge management,” he said.

Nations that boast of having nuclear arsenal of incredible destructive power “cannot kill an invisible enemy of a few million microns,” Shende said, referring to a unit of measurement equal to one millionth of a meter. He warned that the coronavirus is showing the ability to quickly mutate.

“And as always, in global disasters, the poor suffer the most,” Shende said.