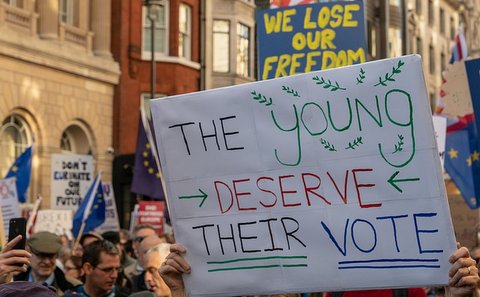 Posted at 08:00h in Politics, Youth by Danielle Parenteau-Decker 0 Comments

Young voters in Richmond are excited for local elections because of the potential change their votes can make in their community.

While many have become discouraged by the federal election candidates, Richmond youth such as Gaby Hernandez, 21, work to get people to vote in local elections. Hernandez is a voting outreach coordinator for the Melvin Willis campaign in Richmond’s District 1 election for City Council.

“The majority of people that help in campaigns are older white people and older people, in general,” she said. “The younger generation is caught up in school, work, and it is harder to get them motivated.”

Being able to work one-on-one with Willis has given her a deep appreciation for local candidates and the seeds they plant. She is able to see the connection between the candidate and the community, something she doesn’t feel with national elections.

Hernandez has been involved in local politics and voted before, but this is her first time working on a campaign. And doing the grassroots work a local campaign needs has taught her a valuable lesson.

“I learned that if everyone, every single resident, was involved in the local government, then the process would run smoothly,” she said. “The biggest problem is that there are not enough people doing the work — plain and simple.”

Hernandez said Richmond needs its youth to get involved by voting for the right candidates, propositions and measures and then staying involved in local politics.

A lot of people don’t know that there are local policies that we vote on, said Richmond resident Alfredo Angulo, 20.

Angulo was a member of the Associated Student Union at Contra Costa College and is now a UC Berkeley student.

“We emphasize the national election, but there [is] a bunch of stuff in the state and in the region we vote on,” he said, “specifically like the people running BART and those people that we elect for our local council.”

Measures and policies on the ballot can address issues that affect a lot of people, but these are often not voted on, he said.

One such measure Angulo hopes will pass is Proposition 15, the Schools and Communities First Initiative, which would give more funding to public schools by taxing commercial and industrial properties at their current value. He said schools need funding for youth programs that would encourage people in the community to further their education.

“We see in data that college-educated people tend to be more political and one of the goals for Prop. 15 is to give more knowledge and understanding to our people so they can change policies,” Angulo said.

Angulo participates in community events where voting and census information is given out. He sees this as a route to get younger people like him motivated and aware of what people need to vote on.

“We need to put information in people’s faces because they won’t ask questions,” he said.

The growing unrest in the nation due to police brutality against Black people and other continuous forms of racism has spurred more young people to “show up in numbers” to vote, Angulo said.

“Young people have political power. If we mobilize we can actually get policy change,” he said.

First-time voter and Richmond resident Namon Oden, 20, said he has yet to look over the ballot in full, but he is happily doing research to be more informed.

Oden is most excited to see propositions that affect health care and education. Though these are issues that affect everyone, he said, a lot of his friends are not interested in them. Oden said he does not consider himself a political person but rather someone who is in the “midway” toward becoming political.

He understands that not everyone wants to talk about politics because many topics surrounding elections can become heavy and require a level of maturity young people might not be ready for. Despite this, Oden knows it is extremely important for young Black and Brown people, especially, to be involved in local elections.

“We need to speak up in politics and our own words must be spoken from people like us,” Oden said.