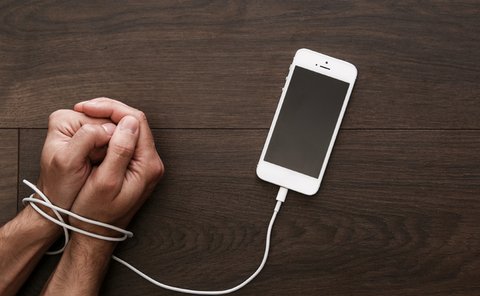 Posted at 07:00h in Arts and Culture, Commentary, Youth by Danielle Parenteau-Decker 0 Comments

“The Social Dilemma,” a new documentary on Netflix, dives into the world of social media and its effects on people. The movie exposes how social media is designed to keep us entranced. From likes and comments to ads and sponsors, social media is based on an algorithm built to exploit users for financial gain.

The scariest part about the film is seeing how addicted people are to their devices. It really raises the question, how ethical is social media? Is it an escape from our everyday lives or a prison that we have been guided into?

After watching “The Social Dilemma,” I was hesitant to use my phone. Could all of this really be true? The mind games, the algorithms designed to keep me glued to my phone. The more I thought about it, the more it made sense: I am practically addicted to my phone.

As a person born in the age of technology, I can say that I’ve had technology around me for as long as I can remember. So I ask myself, why can I not be without my device? Technology helps me with school and communication, but does social media benefit me?

My mind feels pulled apart as I ask myself these questions after viewing the documentary. Am I just a dollar sign to the creators of these apps? The film makes me realize that I am simply a mouse in a maze with scientists waiting to see if I can escape, but as I get closer and closer to the exit, they add more maze — more photos, more likes, more comments. It never ends. “The Social Dilemma” revealed the shackles that social media companies have placed on their users’ ankles and that they have no intention of breaking them free.

Watching the movie, it really struck me when the creators of these apps admitted to using psychological tricks to keep users on their phones. They purposely put specific types of posts to keep you on their app for longer periods of time. When I heard this, I immediately looked at my phone and wondered how much time I waste on it because something has been designed to catch my eye.

As “The Social Dilemma” shows, the creators of these apps, like Instagram and Facebook, know how detrimental they are but continue to let them take over people’s lives. It’s like the documentary caught them and forced them to admit their wrongs but not to do anything about it. They have the power to change how social media affects people, but they won’t. I can sum the reasons why down to money or other personal gain.

As much as I hate to admit it, my phone is the first thing I look at as soon as I wake up. Out of instinct, I check for messages or notifications as if these things will allow me to start my day. Every morning. Every day. I get to see most of my friends through social media. I guess it connects us without us ever really having to interact with each other.

If you asked me to not look at my phone for a couple days, I’d probably fail within the first couple of hours. I think that’s what social media addiction looks like. It’s an escape for anyone who uses it. But it can pull you into a hole where you don’t feel the hours pass by, where before you know it, half the day is gone.

Now, it’s not all distraction and an itch to go on your phone. So many people use social media for business and connecting to other people. In a world where so many are disconnected by their screens, it’s also a world where people can connect through those screens. For families who might only see each other once a year, social media can connect them all year-round.

As with all things in life, the key is moderation, balance. Social media runs young people’s lives because it’s allowed to. For the youth, it’s a way to pass the time, and for parents, it’s a way to keep their kids occupied.

So where does that put me, or anyone else, who knows the side effects of social media?. At the end of the day, I’ll go to sleep looking at my phone, and the next day, I’ll wake up looking at it again.