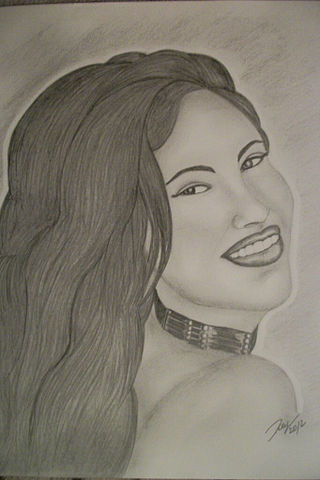 23 Oct Music at Home: the Sounds That Shaped Us

Posted at 15:00h in Arts and Culture, Commentary, Youth by Danielle Parenteau-Decker 0 Comments

“I live in a Hispanic family, so one song that every little kid learns is ‘Como La Flor’ by Selena,”  writes 16-year-old Edna Orellana. (Reynaldoz1616, CC BY-SA 3.0, via Wikimedia Commons)

Richmond Pulse asked high school students about their first memories of music and what their parents and older family members listened to while they grew up. Their responses have been lightly edited for clarity.

My dad would always play the same song over and over again. I used to hate it, and I would get annoyed that he would always play the same song on the speaker. He would listen to Spanish music, and when I was small I didn’t really like speaking Spanish. So that’s why I didn’t like his music. But as I grew older, I started listening to Spanish music, and now I understand why he would play it all the time.

My parents teach me about Spanish music, and my brother and my friends teach me rap music. I like both because when I was little, I only had Black and Mexican friends. It was always us hanging out at recess and talking to each other. I also got rap from my cousins. But my mom taught me Spanish music, and there is nothing that I don’t like about it. I like to listen to people rapping about their lives. They might throw in something about guns and drugs, but it’s from their life.

I live in a Hispanic family, so one song that every little kid learns is “Como La Flor” by Selena. That’s a song you hear playing every morning. Her music is cumbia and salsa too. She died a long time ago [in 1995], but her music is [still] so good. “La Chona,” “El Baile del Beeper,” “Sopa de Caracol,” “Se Mueve.” All these songs I have heard from family parties and online.

I can’t remember very well, but when my parents had parties at my house, they were all dancing to Salsa or Bachata.

The musical styles I’ve inherited were hip-hop and rap, pop, R&B and soul from my parents, Mexican/Hispanic music from my grandma. And some rock music from my dad.

I have inherited old school music from my family, and vice versa, I have introduced them to “new” school music.

When I was 10 or 13, me and my mom would listen to music when she took me to school. It was the best because we would sing and it was fun, but we don’t do that any more.

My whole family listens to Latin music because most of them only speak Spanish. We are Mexicans, so we listen to different genres in which the guitar, accordion, requinto (a type of guitar), sixth bass, etc. are widely used. When a member of my family hears old corridos, it reminds me of the patronal feast that is celebrated on the ranch where I lived.

I wasn’t really listening to music like that when I was growing up. My cousin would show me some cool rap. The rap sounded pretty good when I listened to it. My mom introduced me to gospel music.

One of my fondest memories of music is when I would be at my family party’s and always be the little girl dancing. I loved to dance to music. My family always tells me stories of how I would be the only one dancing and trying to get my little cousins to join. They would put on some bachata music, and when the adults started to loosen up, they would dance to Caballo Dorado. I grew up listening to Vicente Fernandez, Jenni Rivera, Los Tigres del Norte and other Spanish music.

To this day, I listen to all the artists I once danced to. Their music holds memories and moments of happiness.

When I was a kid I used to live in my grandma’s house. Every day she used to wake up early to do chores and she was always so happy cleaning the house while she listened to cumbias and romantic songs. She was always telling me, “Esta si es musica, no como la musica de ahora que dice puras coas tontas” — “this is music, not like the music of today that says pure silly things.” I love all kinds of music, but I have favorite songs that my grandmother used to hear.

The earliest memory I have of music is being at a party when I was at least 2 years old. I remember hearing a song called “Como Te Voy a Olvidar,” Then and there, I began to like cumbia; however, I like listening to any music.

When I was younger, music back then had a better and [more] uplifting vibe than today. I don’t remember much of first memories of music, but I know I loved it. But I do remember sitting in the car and listening to the radio and singing, just having a good time. Some artists I liked to listen back then were mostly from the ’90s and late 2000s, which, to me, is when music was fun.

Ever since I can remember, as soon as my mother would wake up, she would turn her radio on and turn it off when she would go back to sleep. My mom got me and my brother to listen to the group of Mana, Bandera etc. I didn’t really understand what the lyrics meant, so I didn’t enjoy it. I started to listen to music and fully enjoy it was when I was around 4 and 5 years old. I started to listen to Shakira, and I would always try to imitate the way she moved her hips, but I looked broken every time I tried that because I was so skinny.

When I was about 5, my mom and dad used to play music in their bedroom while we are sat and chilled. They both were singing the song “Sexy Lady” by MC Magic.

My first memories of music was when I was about 4. It was always some sort of pop or hip-hop. My mom listens to hip-hop and rap often and Spanish music, and would always dance or sing along. I started getting more into rap because of my mom and now love rap oldies.