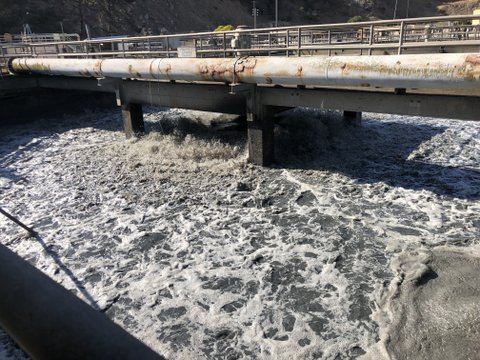 The Richmond Sewage Treatment Plant, which processes millions of gallons of sewage every day, is being overworked by fats, oil and grease, said a plant leader. (Maria Bernal / Richmond Pulse)

Shelter-in-place orders are putting Bay Area water quality at risk, and Richmond is a prime example of what is reportedly happening in treatment plants nationwide as more people cook from home and wrongly pour fats, oil and grease down their drains.

The Richmond Sewage Treatment Plant serves 70,000 Richmond residents and shares a discharge pipe with the rest of West Contra Costa County that stretches 1.5 miles out into the San Francisco Bay. Seven million gallons of sewage pass through the treatment plant per day on average in dry weather, according to general manager Brian Bruce.

Energy management firm Veolia Services operates the plant under contract with the city. The firm is responsible for Richmond’s wastewater treatment facility, sewer and stormwater collection system, and emergency sewer problems and odors.

The plant samples the water every 15 minutes. But Bruce told the Richmond Pulse that samplers in August noticed an abnormal amount of foam in its tanks, prompting them to send samples to a testing lab.

The foam in the tanks is a result of excess fat, oil and grease, or FOG. The collection of FOG is likely connected to shelter-in-place orders, according to the city of Richmond’s Water Resource Recovery Department. Bruce said this phenomenon is being seen in the industry nationwide.

According to a quantitative analysis by the city, residential homes are major sources of FOG found in Richmond’s sanitary sewer service area. Single- and multi-family homes collectively account for 98% of FOG, and 1.2% comes from restaurants.

Restaurants are operating at a limited capacity under coronavirus health orders, and only eight are currently open downtown. As a result, restaurants have had a minimal effect on FOG levels since shelter-in-place orders were announced, according to the Richmond Main Street Initiative. The Richmond Municipal Code regulates FOG generation by commercial businesses but not residential homes.

The shelter-in-place order has encouraged people to cook at home, but many are not just cooking for their families.

To earn income, some Richmond residents have started at-home food businesses. People cook and sell pastries, soul food, Mexican, Salvadorian and Laotian cuisines, among other varieties, from their homes. Fried food is the most sought after. And that fried food contributes to more FOG down drains.

Sewage issues are an ongoing Richmond problem, however, and have been a source of litigation for years.

Baykeeper, a nonprofit environmental watchdog organization that monitors Bay Area water quality, and the Richmond-based West County Toxics Coalition sued the city in 2006 for, they said, “spilling hundreds of thousands of gallons of raw sewage every year,” according to a Baykeeper press release.

Baykeeper staff attorney Nicole Sasaki said the environment is affected “when the sewage is plugged by the FOG.” That can cause pressure to build up and ultimately push the sewage out through maintenance holes, for example.

Then it can end up “in the street where people can come in direct contact with it,” Sasaki continued. “And then if it’s not cleaned up right away, then it can get into the storm water system and then the bay.”

Baykeeper said in a press released that between the year 2003 and 2006 the city “spilled more than 17 million gallons of sewage in or near tributaries that empty into the San Francisco Bay.” The raw sewage that overflowed into homes and streets was partially the result of FOG.

“First of all, if it doesn’t get to the plant, it gets plugged somewhere in the system, and it will cause sewage to go through manholes. We call those sanitary sewer overflows. And if … that sewage gets into the bay through a storm drain, it violates our NPDES permit because it’s a public health concern,” said Joanne Le, environmental service manager at the Richmond water resource recovery department. NPDES refers to the National Pollutant Discharge System permit program of the Environmental Protection Agency.

This “is a public health concern because we all go to the beaches, and if you get sewage in the bay, obviously it’s not good,” Le said.

Sewer pipes blocked by FOG can also cause sewer bills to go up and raw sewage to overflow inside homes. Exposure to sewage can result in contact with disease-causing organisms.

“First of all, it will be costly on them if it clogs up their place of residence,” Le said. “We definitely need residents to do their due diligence and their part in protecting their homes, their health, and the health of their environment … It’s going to impact the fish, the plants and our creeks.”

Pipes in the treatment plant can cost millions of dollars to replace and repair which costs taxpayers more.

“And, of course, to protect the plant — because the public pays into this structure — it’s their money that keeps this plant running, and the structure standing where it is now. So, overall, they’re protecting their investment,” Le said.

A clog that occurs in the boundaries of the laterals — or pipes that carry waste from homes to the city’s sewer system — can cost a household thousands of dollars to replace. The city has a Sewer Lateral Grant Program that offers residents some financial support, but the cost can still be prohibitive.

Richmond resident Marcella Navas is an environmental compliance inspector for the water resource recovery department. Her family had to replace their sewer laterals because they were old.

“It’s just an expensive project and puts on a financial strain. My parents don’t make tons of money,” Navas said. “And knowing that it’s not anybody’s fault — it’s just an extra cost that nobody wants, and it’s just easier to just not throw things down the drain that aren’t supposed to be there. And now we have a new lateral. So now they’re very cautious.”

Even small amounts of FOG can accumulate over time, but changing the way people dispose of their FOG at home can make a significant difference.

“It’s best to transfer [FOG] into a sealed bottle and then take it to a recycling facility,” Baykeepers’ Sasaki said. “People should not be washing oils and FOGs down the drain and into the garbage disposal. Instead, [they] should be wiping down greasy pans with paper towels, and then throwing the paper towels in the compost or the trash.”