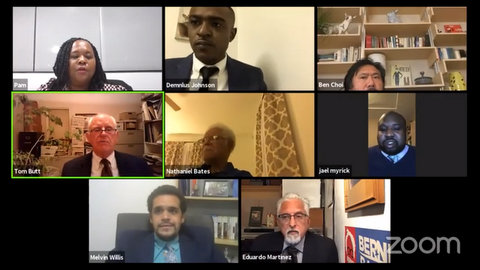 Posted at 12:50h in City Government by Danielle Parenteau-Decker 0 Comments

The Richmond City Council unanimously approved an ordinance amendment Tuesday to give the Community Police Review Commission the power to investigate police-related sexual assault and harassment, allegations of discrimination and all incidents involving the discharge of a firearm at a person.

The commission voted to add the new investigative powers in February, and the council first discussed the amendment in March. On a narrow 4-3 vote at the March meeting, the council moved the item forward into a meet-and-confer process between the city and the Richmond Police Officers Association. Currently, the commission can only investigate alleged uses of unreasonable force and instances of racial discrimination.

The amendment also gives the CPRC the power to select a member of the commission to serve on Richmond Police Department interview panels for hiring new officers. Council member Eduardo Martinez said he wanted to make a friendly amendment to allow the CPRC member chosen to serve in the promotional process for officers. He said it was his understanding that Police Chief Bisa French is already allowing commissioners to participate in the hiring process.

Bruce Soublet, an assistant city attorney who advises the commission, said the city would have to enter back into the meet-and-confer process to attach Martinez’s amendment to the ordinance. The particular issue is also on the CPRC agenda for its upcoming December meeting, Soublet said, which means the commission will likely make a recommendation to the council.

“They haven’t discussed this. They haven’t asked for this as of yet,” Soublet said. “I believe we would have to meet and confer with the [police] union in order to add this to the ordinance amendment at this time.”

The Council members, for the most part, didn’t comment on the item. At the March meeting, Mayor Tom Butt and council members Nat Bates and Ben Choi opposed it. Butt, at the time, called the amendment “a solution looking for a problem,” and said he didn’t think the case had been made that the categories covered by the amendment weren’t being adequately covered.

Public commenters approved of the amendment. Yenny Garcia, a member of the CPRC, thanked Soublet, the Richmond Police Department and Council member Jael Myrick for working with the commission to move the item forward. She said the community would appreciate the amendment, and it gives commissioners an opportunity to learn more about the RPD hiring process. Garcia said the commissioners should have a role in the promotional process as well.

“It’s important for the community to learn about the hiring process and take away those misconceptions and that misinformation that’s happening,” Garcia said. “We can actually state facts that will further bridge that gap between the community and the police department.”

Ben Therriault, RPOA president, said the union supported the amendment as written. He said the union and the city had an appropriate meet and confer process, and the union was the first to bring up the hiring process change to have citizen involvement, which he said was standard in the Bay Area.

At the March meeting, Therriault said the union didn’t support the amendment because the department’s officers didn’t have problems covered by it, but also because of ambiguous language. He said on Tuesday that proper legal definitions had been put in place.

Richmond resident Mike Parker said he was pleased to see the amendment going forward, but hoped people viewed it as “the beginning of a process, not the end of a process.” Parker said good policies developed for, and often by, the police department are often subverted by “old boys’ networks” and people wanting to protect each other.

“That means we have to work still harder to bring more light into the process and more community involvement,” Parker said. We need to look for other ways in which we can wed the community values to the police department.”