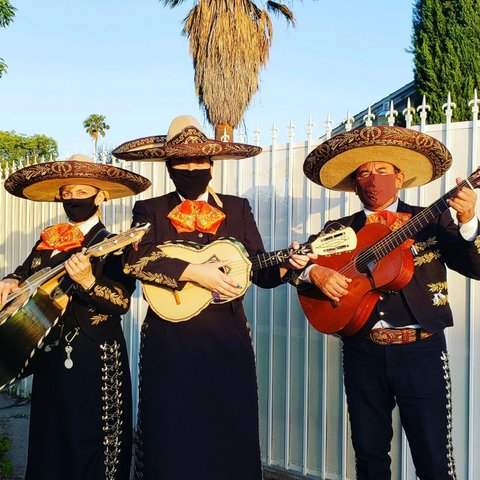 Unable to book many paying gigs because of the pandemic, Aurelio Reyes, right, who plays in a mariachi trio with his wife and daughter, said he has been living on his savings and donations for months. (Photo courtesy of Aurelio Reyes)

The news fell like a bucket of cold water for several mariachis from L.A,’s Boyle Heights area. Many received cancellations over the weekend after Gov. Gavin Newsom announced a statewide curfew for all nonessential businesses from 10 p.m. to 5 a.m. in most counties. The state is also banning gatherings of 15 people or more in order to slow the spread of the virus.

Aurelio Reyes has been a mariachi for 12 years and for the last six years, he has been part of a mariachi trio with his wife and daughter. He said that for a few weeks they were more comfortable since work was returning. They were hired again for small at home events.

“But now people (are) canceling us, and we don’t have other jobs,” said Reyes, who said he has been living off his savings plus donations for months.

He said although they sign contracts with clients for events, they can’t force anyone to pay.

“When we go to play, we are always cautious,” Reyes said. “We use face masks, hand sanitizer and (we practice) social distancing.”

Israel Moreno, 52, another mariachi from Boyle Heights, said he has been making calls to see if he can get any jobs with other groups playing.

“I call my colleagues, but no one has work,” he said in distress. “We were just rising up, and they cut our wings again. We don’t know to do anything other than play music.”

Like Reyes, Moreno said that a few weeks ago they were already receiving more contracts, but with tighter restrictions, jobs are vanishing.

Moreno says he is the sole breadwinner for his family, including two children.

In response, Moreno said that several mariachis are rallying together through the Organization of Independent Mariachis of California. The group has managed to get other organizations to help them with food donations each week.

“We put food aside for (mariachis) who need it the most,” Moreno said. “They give us milk, eggs, vegetables, ham, and that helps us a lot.”

Some have also received financial help. Both Moreno and Reyes were part of the first group to receive a prepaid card for mariachis from the Community Power Collective, a nonprofit organization helping the needy.

Carmina Calderon, a community organizer, said that when the pandemic began, CPC focused on collecting financial aid for street vendors who were seriously affected when street sales were temporarily banned.

“But we realized that the mariachis were also in a very difficult situation, especially because many of them do not qualify for public aid,” Calderon said.

The group launched an online fundraiser benefiting the musicians and also used other grants.

A survey showed many musicians have lost about 70% of their income due to performance cancellations. Some have managed to get part-time jobs as day laborers, but most are still waiting to play again.

“Many of them have problems paying their rent, others live in crowded conditions with more companions or are sleeping in their cars,” said Calderon. “Those who live alone here not only worry about paying their rent but also about sending money to their families in their countries.”

The organization gave the first round of cards loaded with $400 to 80 mariachis in July. A second round aimed at the remaining batch of mariachis is expected to be given out before Christmas.

Calderon said not enough funds have been raised from a GoFundMe account to support mariachis, so the cards probably will be just under $400.

Jacqueline Garcia is a reporter with La Opinión. This article is part of California Divide, a collaboration among newsrooms examining income inequity and economic survival in California.