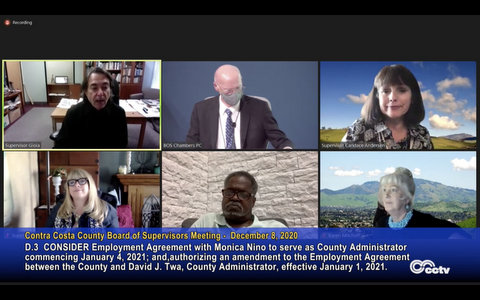 The Contra Costa County Board of Supervisors unanimously agreed to appoint Monica Nino as the next county administrator. (Screenshot captured by Edward Booth / Richmond Pulse)

The Contra Costa County Board of Supervisors unanimously voted to appoint Monica Nino as county administrator Tuesday amid criticism from labor unions.

Nino served for the past seven years as administrator for San Joaquin County and, before that, as administrator in Stanislaus County, where she spent over 20 years in various county positions. Nino is the first woman and the first Latinx person to be hired in the top executive position for Contra Costa County’s government. Nino succeeds David Twa, who is retiring after serving in the position since 2008.

“I am looking forward to joining Contra Costa County in January and working with the Board of Supervisors, the employees and the public to move forward on addressing the various challenges, along with the opportunities, for the next several years,” Nino said at the meeting. “I look forward to carrying on the positive labor relationships that Mr. Twa has developed and engaging with the unions early after my arrival in Contra Costa County.”

But throughout the public comment period, members of labor unions, most prominently the local government unions Service Employees International Union Local 1021 and the American Federation of State, County and Municipal Employees Local 2700, criticized the lack of union input in the hiring process and pointed to examples of Nino’s spotty relationship with labor in her previous positions.

Josh Anijar, executive director of the Contra Costa Central Labor Council, said during public comment that because of the close relationship labor unions have had with the county this year, they were shocked at the announcement that Nino would be hired as county administrator. He criticized her specifically for spending millions this year to hire temporary nurses to replace striking county nurses. Anijar also criticized Nino’s use of law enforcement to shut down protests at public meetings.

“The labor community did not expect a perfect candidate, but we fully expected the selection to include the values of transparency, fairness and consideration for the county’s workforce,” Anijar said. “The selection and the process of the appointment indicates that the county is diverting from our shared core values.”

Other speakers echoed Anijar’s comments. Stacie Hinton, vice president of AFSCME Local 2700, asked the board to rescind Nino’s job offer and choose someone else in a transparent hiring process that involves the unions.

“We can’t help but perceive the choice of her being hired as an act of hostility and a clear signal that the board doesn’t desire to continue a genuine partnership with workers and the unions moving forward,” Hinton said.

Dan Geiger, coordinator of the Contra Costa Budget Justice Coalition, said he was disturbed by what he heard from the other public commenters. He said he didn’t know what could be done at this point but that the coalition remains committed to working with labor to make sure the priorities of those most in need and the people who work for the county are taken care of in the budgeting process.

Mike Parker, a member of the Richmond Progressive Alliance steering committee, said he was shocked at the discussion. He urged the board to rescind the offer to Nino and said that doing so would be less difficult than fixing the mess made by hiring her.

“In this COVID pandemic period, we have to depend on our frontline workers, public workers, to work cooperatively, to work in unusual situations and at considerable risk to themselves,” Parker said. “I think you need to recognize that your actions today amount to declaring war on county employees, even if you don’t intend it.”

“I expect that the attitude here, not only by Monica but also by others, will be different,” Twa said. “It will take time, but I think really the goal should be for our unions to say, ‘You know, we’re willing to give her an opportunity to see if she’ll step up.’ ”

Twa added that he’d served on a number of state boards and committees with Nino. In each case, he said, she was professional, engaged and showed good leadership. He said the fact that Nino is the first woman and Hispanic county administrator will make a positive impact on community and union relationships.

Every board member also defended their choice of Nino. Supervisor Karen Mitchoff said she was “very disappointed” in the county’s labor partners. She said it wasn’t the role of labor to be involved in contract negotiations and the hiring process. She also said she interpreted the comments as saying the board was ignorant and didn’t ask Nino important questions during the hiring process.

“We did do due diligence,” Mitchoff said. “Ms. Nino, in my opinion, rose to the top because she has dealt with a county hospital. Our health services department has the highest number of county employees. We don’t want to lose our county hospital.”

Supervisor Diane Burgis said she was confident Nino will work with everyone and maintain progress the county has made in protecting the labor force and preserving financial stability. Supervisor Federal Glover said he’s confident in Nino because she clearly understands she works for the board of supervisors.

Gioia said he respects and acknowledges the concerns of the labor unions. He said he wouldn’t call most of the San Joaquin County board members progressive or pro-labor, and clearly there’s a different culture there. The impression he had from an interview with Nino, he said, is that she was working with the direction of the board and feels that’s the role of the position.

“The one thing that I think was very clear that the board said during these interviews is, ‘we have worked hard to develop a respectful, productive working relationship with our unions, one that has dignity and respect,’ ” Gioia said. “Her response was: ‘I’m committed to following that tone that you all set.’ ”