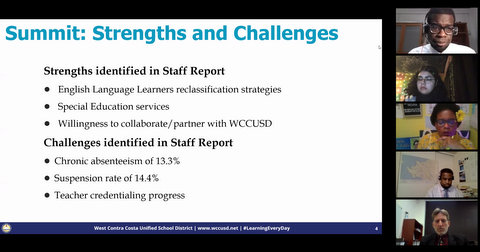 Posted at 12:49h in Education by Danielle Parenteau-Decker 0 Comments

The Summit Tamalpais charter school must improve student performance, among other things, or risk being shut down. (Screenshot captured by Edward Booth / Richmond Pulse)

The West Contra Costa Board of Education voted Dec. 22 to conditionally renew the charter of Summit Tamalpais for a five-year term.

Additionally, board president Mister Phillips announced the creation of a charter school oversight subcommittee, chaired by board member Demetrio Gonzalez-Hoy. The subcommittee will receive annual reports that charter schools are supposed to make to the school board, annually review memorandums of understanding, review board policies related to charter schools and make recommendations to the board.

Phillips said many of the charter school-related tasks covered by the subcommittee haven’t previously happened in the district, despite being technically required.

“What normally happens is we grant a charter petition, and then we don’t see them again for five years,” Phillips said. “During that period of time, there are all kinds of things that are happening, good and/or bad, and then in the fifth year, when they’re here for their renewal, everybody wants to talk about what’s happened in the last five years in 30 days. That’s not feasible. That’s not good oversight. We need to be checking in and the charter schools need to be checking in, at least annually.”

Summit Tamalpais serves roughly 450 students from grades 7-12, according to agenda documents. The school is located in San Pablo and opened in 2016. The 14 conditions established by the conditional renewal target issues district staff found with the school: high chronic absenteeism, a high rate of suspension, teacher credentialing and low teacher retention, among other challenges.

In two years, representatives from the charter school will have to come back before the board so that their status in meeting the conditions can be evaluated. If the school fails to meet the conditions, the district may initiate revocation proceedings against the school, and potentially shut it down.

The conditions of approval include: the school won’t be classified by the state as a low-performing charter school during its charter term; the school must show increases in student performance on English Language Arts and Math in each year of the charter; and the school will increase the percentage of English language learners demonstrating proficiency with the language.

Additionally, the school must reduce its in- and out of school suspension rate of African American students to less than 10% per school year. It must also improve teacher and student retention rate to 90% from school year to school year, comply with charter school law and labor laws, and maintain a rate of 100% of students meeting the minimum subject requirements for freshman admission to the University of California.

Gonzalez-Hoy said he was disappointed with the conversation the board had with representatives from the school during the meeting, specifically the answers he received from Summit staff.

“To me, charter schools should be way over performing our schools, especially when they don’t serve the needs that we have [in the district],” Gonzalez-Hoy said. “And they’re underperforming for English language learners, for students with disabilities, and for students of color.”

Gonzalez-Hoy also said he was disappointed about the language that ended up in AB 1505, which he said effectively tied the board’s hands in its ability to deny the charter renewal. He added that experts both within the district and outside had said the district would face litigation if the board voted not to renew.

“This is why I believe a conditional approval with all these conditions is the way for us to go,” he said. “I believe 100% in holding Summit accountable to make sure we’re serving every single one of the students who they’re supposed to serve and who we serve.”

Board member Jamela Smith-Folds said the conditions give the school an opportunity to achieve what already should’ve been in place. Board member Leslie Reckler said the school has work to do.

Phillips, in response to concerns in public comments that the charter renewal was last on the agenda, said he didn’t think it was fair to staff and everyone else who had to participate in the meeting to push the renewal item up first. Phillips said the reason the board had to have the special meeting was because Summit wouldn’t give the district an extension on the renewal item.

Phillips also said it was a priority of the new board to address district items before charter school items.

“Just as a general rule, at least this year, we’ll be addressing district business before we address charter business, so people need to get used to that,” Phillips sasid. “Not that charter business is not important, but we have some things we need to take care of in house first, so you’ll probably see this again.”