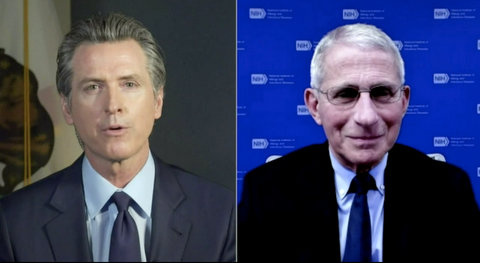 Dr. Anthony Fauci, right, said, “California is hit as bad as anybody, if not worse,” by the coronavirus in a public conversation Wednesday with Gov. Gavin Newsom. (Screenshot captured by Edward Booth / Richmond Pulse)

Gov. Gavin Newsom announced Wednesday that Southern California has seen its first case of a new, more contagious COVID-19 strain in a conversation with Dr. Anthony Fauci, director of the National Institute of Allergy and Infectious Diseases.

Fauci said California residents should think of the appearance of the new strain, which was first identified in the United Kingdom, as something that’s expected. He said that though it appears to transmit better between people, there’s no indication the new strain is more severe, and it doesn’t appear to evade the protections given by vaccines. Additionally, people in the U.K. who have been infected by the strain don’t appear to be reinfected, Fauci said. He added that mutations are expected, but most mutations don’t have any impact on important functions of the virus.

Newsom asked Fauci what he’s been most surprised by with the coronavirus. Fauci responded that he’d never seen a virus like it, and what’s been the “game changer” in terms of virus control is the ability of asymptomatic carriers of the virus to transmit it. That’s the fundamental rationale behind the public health advice of universal mask wearing, he said. And, he added, the fact that most cases only cause minor symptoms or none at all has been a major reason governmental agencies have had communication difficulties.

“I’ve never seen some infection that has been in the middle of such divisiveness,” Fauci said. “That makes public health messaging and public health implementation extremely difficult.”

Fauci said he’s disappointed with how the coronavirus has progressed in the United States over the past six months. He said that, after the first wave hit, he thought the country would be able to bring cases to such a low baseline that blips of the virus during the winter months could be contained.

“We’ve been hit badly, and unfortunately, California is hit as bad as anybody, if not worse,” Fauci said.

Fauci also talked about how the COVID-19 pandemic will proceed in 2021 with several vaccines now coming into play. He estimated that enough people will be vaccinated by early next fall fall that the country will be able to come back to a semblance of normality.

“You can never guarantee anything, but I believe strongly that if we pull together as a nation and do the kind of public health measures seriously and uniformly, up into and beyond the time that vaccines kick in, I believe that we can crush this outbreak within the timeframe that I just mentioned to you,” Fauci said. “As we gradually get more and more people vaccinated, we’re going to be looking at this thing in the rearview mirror.”