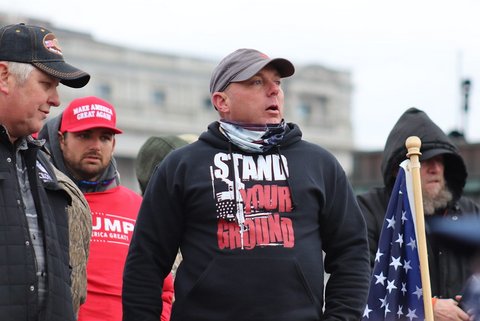 Last week, after a violent mob of President Trump’s supporters attacked and invaded the United States Capitol while protesting President-elect Joe Biden’s win of the 2020 election, Capitol Police officers evacuated members of Congress to an undisclosed area nearby.

“I am safe in a secure location,” Rep. Karen Bass (D-CA-37) posted on Facebook shortly after. “The President of the United States is inciting a coup. We will not be intimidated. We will not be deterred.”

That night, after the breach of the Capitol — and hours after rioters broke windows, defaced art, stole items, broke furniture, set small fires in the building, among other crimes — the United States Senate reconvened to certify Biden’s win. Leaders from both parties said they hoped the move to complete the work they began that morning would project resilience and inspire confidence, reassuring Americans and the world that the country’s system of democracy, regarded by many as the standard throughout the world, was strong and unshaken.

The next day, Bass, who represents a Southern California district that covers parts of Los Angeles, Inglewood and Culver City, called for the immediate removal of the president.

“Donald Trump should be removed from office today,” Bass posted on Facebook. “That can happen one of two ways. First, Vice President Pence can step up and get the President’s Cabinet to invoke the 25th Amendment. Unfortunately, I believe members of the Cabinet are as corrupt and unpatriotic as the president and, though the president is clearly unfit for office, they lack both the courage and the commitment to our Constitution.”

Under the 25th Amendment, if the president of the United States dies, resigns or is unable to carry out the duties of his job, the vice president would assume the presidency.

If the Cabinet does not invoke the 25th Amendment, Bass urged her congressional colleagues to impeach the president “for the second time.”

Speaker of the House Nancy Pelosi, who represents California’s 12th congressional district, an area that spans parts of southwestern San Francisco down to — and across — parts of San Mateo County to the south, has called on Trump to resign. Last week, Pelosi also reached out to Gen. Mark A. Milley, chairman of the Joints Chief of Staff to walk through precautions that would prevent President Trump from launching nuclear weapons or taking unilateral and unapproved military action abroad.

This weekend, Pelosi followed up with a letter to members of the House of Representatives. She told them to be prepared to return to Washington this week to possibly begin impeachment proceedings.

“When we take our oath of office, we promise to the American people our seriousness in protecting our democracy,” she wrote. “For that reason, it is absolutely essential that those who perpetrated the assault on our democracy be held accountable. There must be a recognition that this desecration was instigated by the President.”

Then on Monday morning, the House of Representatives introduced an article of impeachment against Trump for inciting the violence that erupted at the Capitol last week. But Republican members blocked Pelosi’s push to prompt Pence to invoke the 25th Amendment.

The mayhem at the Capitol began the afternoon of Jan. 6, when hundreds of Trump supporters overpowered officers, broke through barriers and stormed the Capitol building. Five Americans died during the riots, including a police officer. So far, there has not been an official estimate of the damage but, according to several news reports, taxpayers will have to pick up the tab for repairs because the building that houses the United States Legislature is not insured.

This past weekend, U.S. Congresswoman Barbara Lee (D-CA-13), whose district covers Oakland and other parts of Alameda County, announced that she joined another member of California’s congressional delegation, Rep. Jackie Speier (D-CA-14), and 45 other colleagues to pen a letter to the Speaker. Speier represents an area covering parts of San Francisco and San Mateo counties.

The members of the House of Representatives called on Pelosi to conduct an in-depth investigation of the security breach.

“Despite promises made to Members of Congress that every precaution was being taken and that there was adequate manpower and coordination, hundreds of people were able to easily enter restricted parts of the Capitol grounds, including the steps, and break into the building itself,” the lawmakers wrote. “Even before yesterday’s events, it was clear that security at the Capitol was inadequate to address current security threats.”

From the same secret location that Bass posted Wednesday during the attack, Rep. Maxine Waters (D-CA-43) also spoke by phone to her constituents.

“I know that I could be a target. It was only a few days ago that another threat came in to kill me,” Waters, who represents parts of southern Los Angeles County, said to L.A. Magazine.

“I know that I should be careful as much as I possibly can,” Waters continued. “I’m a target. As a Black controversial woman, I have the White supremacists and others who are constantly after me, threatening me, saying terrible things about me, and lying about my stance on issues. I live with this and so I’m not surprised that we have protesters. But I am surprised that they have the support of the President of the United States of America.”

Republican California U.S. Congressmen Devin Nunes (D-CA-22) and Kevin McCarthy (D-CA-23), who supported the pro-Trump public protests and legislative objections to Biden’s certification — were among the lawmakers in Washington that day that were ushered away from the Capitol into hiding. Both men represent inland congressional districts in the San Joaquin Valley. Nunes’ district includes parts of Tulare and Fresno counties and McCarthy’s district covers parts of the foothills and elevations of the Tehachapi Mountains and the Sierra Nevada.

Newsom ordered the flags at the California State Capitol to fly at half-staff on Sunday. He said it was a salute to the U.S. Capitol Police officer who died as a result of wounds he suffered when a mob attacked him during the riots.

“Our democracy rests on our common civility. As we work to heal from the aggressions that occurred against our seat of democracy this past week, we honor U.S. Capitol Police Officer Brian Sicknick, who lost his life in defense of our democratic institutions,” the governor said. “Our hearts are with his family and all of our fellow public servants, our Congressional delegation and the brave men and women in uniform who protect us.”