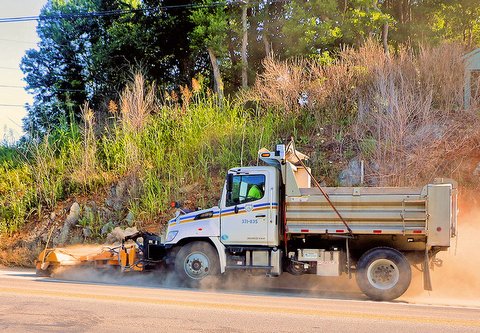 During shelter-in-place, Richmond will not ticket drivers who do not move their cars during scheduled street sweeping. (“West Virginia Division of Highways” by Seth Granville, licensed under CC BY-NC 2.0)

The Richmond City Council voted Tuesday to suspend ticketing for street sweeping, at least until the state’s COVID-19 shelter-in-place order is lifted from the Bay Area, and to explore alternatives to street sweeping over the next three months.

The council voted 6-1 for these changes, with Mayor Tom Butt dissenting. The vote also included allowing all interested neighborhoods to opt into a voluntary compliance process with the removal of signage, if desired, and halted the installment of any street sweeping signs for three months

The council approved the changes instead of approving the installation of 575 street sweeping signs in the Richmond Annex and Panhandle Annex neighborhoods, neither of which have such signs. Residents of both neighborhoods are instead supposed to voluntarily move their vehicles on monthly street sweeping days.

Yader Bermudez, director of engineering and capital improvements for the city, said the installation of signs in the two neighborhoods was initially brought to the council in May last year. The council recommended a three-month pilot program at that meeting to determine whether the two neighborhoods could recommit to voluntarily moving their vehicles for street sweeping. Based on visual evaluations during the pilot, which ran from July to September last year, compliance was about 50% to 60%. Therefore, Bermudez said, staff recommended installing the signage.

Bermudez added that the street sweeping program is a measure to meet the requirements of the City’s National Pollutant Discharge System permit. According to the staff report, the lack of street sweeping caused by noncompliance results in an increased amount of debris entering stormwater drains as well as an increase in blight.

Council member Gayle McLaughlin presented an alternative to adding the signage, put together by her and Council member Eduardo Martinez. Both are residents of the Richmond Annex.

McLaughlin said, first of all, street sweeping fines should be suspended citywide until the end of the pandemic. She said those fines represented a major hardship to families suffering from the economic and health impacts of the COVID-19 pandemic.

McLaughlin also suggested that city staff explore alternatives to street sweeping signs, which any neighborhood could take advantage of. She suggested combining voluntary compliance with text, email and phone call notifications. Signs, she said, would remain in highly trafficked areas.

“Putting up more signs and ongoing ticketing of neighborhoods with signage is not a way to enhance community relationships,” McLaughlin said. “Having the city play a role in achieving compliance with street sweeping is by far a better way.”

Martinez said his objection to installing the signs has always been connected to a lack of research done around the issue, such as what the rate of noncompliance is in areas that have signs, and on possible alternatives.

Council member Demnlus Johnson said he fully supported suspending ticketing during the pandemic. He said he supported exploring alternatives to street sweeping programs, but it was important to make sure any alternative meets the permit requirements and doesn’t result in a hefty fine for the city.

Butt, the only opponent to the proposal, said it was giving him an acute case of déjà vu. He said residents of the Richmond Annex and Panhandle Annex also said they would move their vehicles for street sweeping voluntarily when the program initially came into place and the council decided to not install signs in those two neighborhoods. But the voluntary movement didn’t happen, Butt said, and the city has received complaints about it.

The lack of room in the budget for the signs was the primary reason the item didn’t come back years ago, he said.

“Most other neighborhoods in Richmond have signs,” Butt said. “Most of them are in compliance, and when they’re not, the enforcement program works, it’s a powerful motivator for people to move those vehicles.”

Most public commenters, many from the two neighborhoods under the threat of receiving the signage, supported McLaughlin’s proposal.

“There’s currently no requirement for the city to put in these signs — not for legal reasons, not for compliance with any grants or programs, current or future,” said Grover DeMarinis, vice president of the Panhandle Annex Neighborhood Council. “These signs are only going to add blight to a bright and beautiful neighborhood.