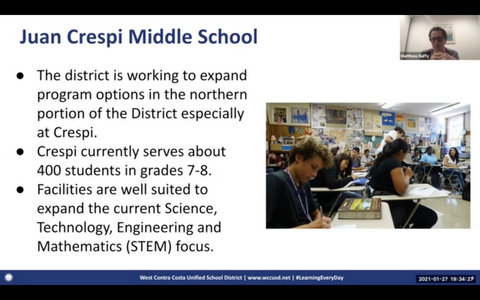 Posted at 14:53h in Education by Danielle Parenteau-Decker 0 Comments

The West Contra Costa Board of Education on Wednesday received a report on two upcoming school configuration changes.

The Mandarin school is a dual immersion program that currently serves students in grades K-3 from across the district. Enrollment will grow to 675 by the 2025-26 school year if the school ends up serving K-8, said superintendent Matthew Duffy. The school needs a permanent home, Duffy said, because it outgrew its initial home at the Serra Campus in East Richmond.

The campus at Pinole Middle School will enable both schools to be in alignment with the nearby Pinole Valley High School, which offers an IB program and Mandarin language classes.

Pinole Middle School principal Eric Mapes said he was excited to welcome another district school onto the school campus, and happy to maintain a comprehensive middle school for Pinole.

West County Mandarin School Principal Eric Peterson said he agreed with Mapes, and that he saw a lot of synergy between the two schools.

“It’s very clear that we have a very similar vision for student achievement and equity,” Peterson said. “On top of that, it sounds like both of our staffs have a similar commitment to preparing our students for success, for college and beyond.”

Peterson added that the school has been working diligently to engage its community by visiting the school and conducting parent surveys as well as virtual outreach meetings. Mapes said he’ll soon be engaging the Pinole community more, but initial responses have been positive.

Duffy also talked about creating a sixth grade pilot program at Crespi Middle School, with an initial target enrollment of 60-120 students. He said the facilities of Crespi Middle School, which is located in El Sobrante, are well suited for an expansion of the school’s current Science, Technology, Engineering and Mathematics focus.

Duffy added that one reason why the district is moving to add a sixth-grade class at Crespi is because it’s seen interest from parents in moving away from the current 7-8 grade model in middle schools.

“We want to see if this will really attract and hold students at Crespi,” Duffy said. “We believe it will.”

Crespi principal Guthrie Fleischman said the school is excited about the possibilities. He said the jump from sixth grade to seventh is often incredibly abrupt for students because they have to shift from having one teacher to multiple teachers, a locker and transitions between classes.

The plan the school is working on, Fleischman said, would work as a way of easing sixth graders in. The students would also have the benefit of getting to know each other for an additional year.

“The current system kind of throws them in there,” Fleischman said. “It’s our job to ease that, but it would be much more efficient and effective to ease them in in that sixth grade year, build those relationships, develop that culture so that when seventh grade starts — and now they’re having six teachers — they’ve been through some transition and they know each other. It wouldn’t be quite as intimidating.”

Both school sites, Pinole Middle School and Crespi, currently share their campuses with charter schools. Duffy said the district, in order to make room for the new configurations, has offered the charter schools different locations in the district.

“We do not believe having those charter schools co-located is healthy for our schools,”Duffy said. “It’s been very challenging.”

Public commenters were mostly supportive of the plans. Kim Dauer-Sargentini, a parent and teacher in the district, said she was initially hesitant about the idea, but it sounded good after the presentation because it seemed like everyone was going to work together. Meredith Belany, a sixth grade teacher at Highland Elementary School, a feeder school for Crespi, asked how the sixth grade at Crespi would impact feeder schools in student population and staffing during the pilot year.

Amy Cantu, a parent with children at the Mandarin School, said her family was in full support of moving the school to Pinole despite living on the southern side of the district. Doing so would accommodate the school at its full potential size, and allow it to fulfil its mission of being diverse.

“West County Mandarin School needs a place to call home, and I really urge the trustees to support this move to Pinole Middle School,” Cantu said. “It’s been a long four years of advocating for a permanent location so that current and future families can feel secure in the longevity of our school.”

The board was also supportive of the plan. Board member Jamela Smith-Folds urged the district to make sure the schools had access to appropriate resources and support, which she said was necessary for change.

The other board members echoed Smith-Folds. Board member Demetrio Gonzalez-Hoy said he was excited about both plans, but he said it was important to get the word out. He also said he’d hate for the sixth grade pilot program at Crespi to take away sixth grade options in some smaller elementary schools.

Board member Leslie Reckler suggested written marketing plans for both concepts. Board president Mister Phillips said he’d like the board to have an update on the changes in the future, but he supported both plans.