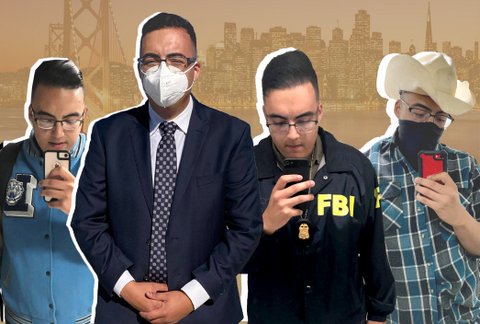 16 Feb From Contra Costa College to Netflix, Marvel and ‘The Matrix’

Posted at 11:05h in Arts and Culture by Danielle Parenteau-Decker 0 Comments

Alonso Saravia has played, among other roles, a high school student in “13 Reasons Why,” left, and an FBI agent in the upcoming “Matrix 4.” (Photo composite by Denis Perez-Bravo / Richmond Pulse)

As Alonso Saravia, 24, patrolled Contra Costa College as an aide to campus police in 2017, he was unexpectedly preparing himself to play an FBI agent in the fourth installment of “The Matrix.”

Saravia, who is a member of the Screen Actors Guild, was cast for a scene because of his experience at CCC.

“The Matrix 4” is directed by Lana Wachowski and stars Keanu Reeves, Priyanka Chopra Jonas and Neil Patrick Harris, among others. It was partially filmed in San Francisco.

“When I was side by side with Keanu Reeves and also Neil Patrick Harris, it didn’t feel real,” Saravia said.

For four years, Saravia has worked on various TV shows and Hollywood movie sets as an extra. Making a living in front of the camera is something he dreamed of doing since he was young.

In 2017, he took the leap of faith to pursue acting full-time. Since then, he has been on screen in Netflix shows, Marvel movies and other Hollywood blockbusters.

The Richmond Pulse talked with Saravia to discuss the first years of his career as an actor.

Richmond Pulse: How did you start acting?

AS: This started when I was at Contra Costa College in 2017. I saw that “13 Reasons Why” was filming locally. I always had a dream of being in front of a camera or on TV shows, but I never knew it was possible. When I got contacted by the “13 Reasons Why” casting director, I knew this was an opportunity to do what I always dreamed of.

AS: In the second season I was just an on-call extra. But I was getting called every week. When the third season came along, they offered me a role as a core student, which means you are signed to the entire season and appear whenever there are high school scenes being shot. That was a seven-month contract. And in the fourth season, they called me back again as a core student.

RP: What sets have you worked in?

AS: For Netflix, I worked in “13 Reasons Why” for three seasons. I have worked in “Ant Man and The Wasp” as a college student, “Venom 2” as a CSI investigator, and “Matrix 4” as an FBI agent. I have also been in commercials for Playstation Latin America, Wish and IBM. And I recently got to work with Brad Pitt and Bad Bunny for a Brad Pitt film called “Bullet Train” where I played a cartel member.

RP: How did you use the experience you gained on the set of “13 Reasons Why” to get more roles?

AS: I wasn’t shy. I networked with anyone I could, even people I didn’t know had big connections like that. I got an agent to represent me and met other casting directors that put me in big movies like “Ant Man” and “Matrix.” Those casting directors saw my consistency and hard work. I would always be on time and they would call me for things they were shooting.

RP: Apart from an agent, what else did you do to advance in the industry?

AS: I am in a union for acting, SAG-AFTRA. I get paid a little bit more than a regular extra who isn’t. It took me two and a half years to join the union. I got offered pension and health insurance, like a regular union. You also get better on-set benefits. You get chefs that cook you breakfast, lunch and dinner.

RP: What is your career goal in the industry?

AS: I want to portray a character that has gone through something I personally experienced. I want to inspire people from the area to chase their dreams and goals. My long term goal is to be the voice for the youth and make an impact in the industry.

RP: So how are Latinos represented in the sets you have been in?

AS: Being Latino makes you stand out in the industry. For example, in “13 Reasons Why,” they only signed 25-30 core students to the entire season. I was the only Latino in that group. And the majority of times, when I step foot in a set, I am a minority.

Sometimes I am the only Latino or one of the few. I have only met around 15 other Latinos on the set I’ve worked in the four years I have been in the industry. Therefore, I want to make it so I can represent Latinos.

RP: How do you practice and get better at your craft?

AS: I study the big actors I work with. I also watch a lot of movies and study how they do certain things or don’t do certain things. Also auditions. I have gotten so many auditions that I didn’t land. And I am learning from those failures.

RP: What actor are you most proud of working with?

AS: The one that stands out the most is Bad Bunny because I listen to his music every single day. Especially being Latino, working with the biggest Latino artist out there right now was incredible. It blew me away.

RP: What advice would you say to someone trying to get into acting?

AS: Own your look and be proud of who you are. The most beautiful things happen when you are not afraid to fail. Every single week I receive a rejection. That is OK. I used to be bullied [in high school] for how I looked — so much I had to transfer schools — but now I am being hired for the roles I am in because of the way I look.