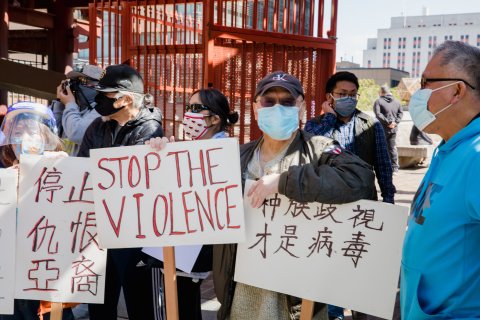 Posted at 14:44h in Uncategorized by Danielle Parenteau-Decker 0 Comments

Protesters in San Francisco call for an end to anti-Asian hate. (Jason Leung via Unsplash)

On Feb. 25 evening, a man scaled the wall of the 117-year-old Higashi Honganji Buddist Temple temple in Los Angeles County’s Little Tokyo neighborhood and set fire to two wooden lanterns at the entrance to the temple, then knocked two metal lanterns off their stands, and finally threw a rock that shattered a plate glass window, as documented in surveillance camera footage.

No one was hurt, said Bishop Noriaki Ito, who serves as the temple’s head priest. Speaking at the “LA vs. Hate — Stop AAPI Hate Press Conference” press briefing March 8, Ito said he does not yet know whether the incident will be investigated as a hate crime.

“Our immediate response was anger and hurt. But then we leaned on our Buddhist teachings to find compassion,” said the bishop, adding: “We are working to create a community of friends.”

The vandalism at the temple is the most recent of a string of anti-Asian American incidents, which have been sweeping the country over the past year. The web portal Stop AAPI Hate, an initiative of the Asian Pacific Policy and Planning Council, has logged 250 incidents in Los Angeles County over the past 12 months.

Nationwide, over 2,800 hate incidents — including violent attacks against elderly Asian Americans — have been reported on the Stop AAPI Hate portal. Advocates at the briefing said that number represented an under-count: Most anti-Asian hate incidents go unreported.

On March 9, the Los Angeles County Board of Supervisors voted on a motion to expand the LA vs Hate initiative and the Rapid Response Network, both of which support victims of hate crimes and incidents with support and resources, including mental health counseling. The county has established the 211 hotline, which allows victims to immediately call for help. The motion is sponsored by L.A. County Supervisor Hilda Solis.

“The situation has got worse over the past year. The person with the loudest bullhorn has mocked our community,” said Solis at the March 8 press conference, adding that the 211 hotline has reported more than 800 hate incidents in L.A. County. “The vast majority of hate crimes go unreported,” she said.

L.A. County Supervisor Holly Mitchell, who also attended the press conference, said: “Just like COVID, hate has spread rapidly. It’s disheartening to see women, children, the elderly, and even health care workers who have put themselves on the front lines for us, are being targeted.”

Shelly Shen, a long-time resident of West Covina, Calif. — the bucolic burb that served as the backdrop for Rachel Bloom’s comedy series “Crazy Ex Girlfriend” — said she lived in a “wonderful community” that had nonetheless experienced hate. Over the past year, one nearby family has kept up a persistent attack on her family and her neighbors.

Shen was bitten by the family’s dog, when out on a walk with her dog; the racist family set up a fight between the two dogs, she said. “They told me they were going to eat my dog,” said Shen, who still suffers scars from the dog bites.

Law enforcement were not supportive, until Shen got LA vs. Hate involved. “They brought us law enforcement help and emotional support,” said Shen. “We no longer felt like we were alone.”

“Don’t think this problem will go away if we ignore it: it won’t. Only together will we come out of this dark time,” said Shen.

Law enforcement was also unresponsive for Hong Lee, a young resident of Los Angeles. Lee had gone into a restaurant to pick up food. A man approached her, handed her a card, and invited her to lunch. When she declined, noting that she was married, the man started up a seemingly unending volley of verbal, racist abuse.

The staff at the restaurant would not help. Lee phoned 911. Police officers arriving at the scene cited the lack of a crime and did not take a police report. “There was a lack of empathy and compassion,” said Lee, adding later that she continues to suffer from post-traumatic stress disorder and was afraid to leave her house for several months.

Lee shared a video of the incident on her social media pages: Five other women, who had faced the same abuse by the same man, came forward. The LAPD subsequently apologized to Lee and took her report.

Lee advised people to take a video, if possible, and to attempt to deescalate the situation. She asked people who witness a hate crime to speak to the offender, and also to provide emotional support. “People have had acid thrown at them; faces have been slashed,” she stated emotionally.