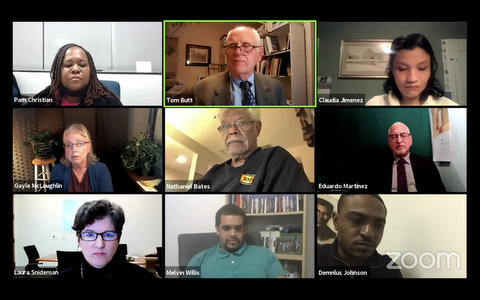 11 Mar Richmond Council Does Not Agree on Budget-Guiding Principles

The Richmond City Council held a special meeting Tuesday to consider the principles meant to provide a framework for the next city budget. (Screenshot captured by Mathew Miranda / Richmond Pulse)

In a continuation of last week’s discussion, the Richmond City Council failed to reach a consensus on budget-guiding principles intended to support long-term fiscal sustainability.

Tuesday night’s special meeting centered on a presentation from Lift Up Richmond, a self-described coalition of community groups, workers and residents. On March 2, Council member Gayle McLaughlin motioned for the meeting after some of the council raised concerns about proposals by consulting firm Management Partners.

Kristen Schumacher, a research specialist at the International Federation of Professional and Technical Engineers Local 21, led the Lift Up Richmond presentation. For most of the principles, the coalition merely expanded on the firm’s language or made slight changes.

However, in a few instances, Lift Up suggested a complete revision.

The primary concerns cited were restrictions for spending reserves below 10%, no transparent process for budgeting the documentary transfer tax, unclear paths for residents to participate in the budgeting process and vague standards for how reserves will be spent. Lift Up also called on the city to no longer invest money in fossil fuel industries or use interest rate swaps when issuing debt.

Following Lift Up’s presentation, City Manager Laura Snideman attempted to clarify any misunderstandings from last week’s proposals.  Snideman said the Management Partners principles were merely a starting point. She also said the city might consider revising its values, which haven’t been looked at in years.

“I suggest we embark on a process that starts with mission, vision and values,” Snideman said.

Snideman added that she believed neither of the two presentations reflected city values.

“The fact that we got the same, if not better, work from Richmond residents for the price of nothing, shows the kind of commitment residents and organizations have,” Martinez said.

Senior Management Analyst LaShonda White refuted Martinez’s assertion, saying the city hired Management Partners for work that has not yet been presented to the council. White estimated that the firm’s budget principles likely did not cost Richmond.

Council member Claudia Jimenez also expressed support for the Lift Up Richmond presentation. She recommended passing the principles Tuesday, so the council could turn its attention to the budget. McLaughlin shared similar sentiments.

In opposition to Jimenez, McLaughlin and Martinez, Council member Nat Bates cautioned against giving Lift Up Richmond the sole say in the budget principles. Bates said the council should include the police department, fire department, neighborhood councils and business associations in the budget discussion.

“I’ll be damned if I’m going to vote for Lift Up Richmond to be the dominant decision-makers as we go forward in this budgetary process,” Bates said.

Mayor Tom Butt echoed Bates’ rationale to include input from other city organizations. Butt also disagreed with Lift Up Richmond’s choice to cite budget guidelines from Los Angeles and Oakland in nearly all of its principles. Currently, both cities are facing huge deficits.

“I’m not sure either of these cities is one we want to emulate,” Butt said.

To foster better working relationships, Council member Demnlus Johnson focused on his colleagues’ interactions with city staff. Johnson added that in his conversations with staff outside the council meetings, there seems to be much more open dialogue.

“I really expect people to be a little more respectful in their interactions with staff because they’re not trying to scam us, which is the general suspicion that is coming off, and it’s somewhat disheartening,” Johnson said.