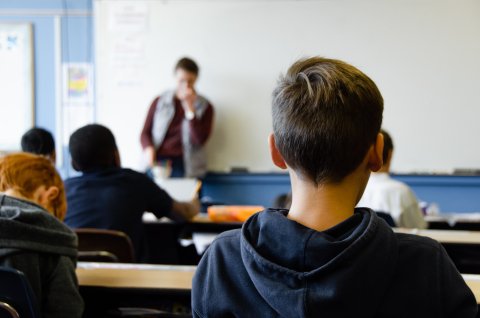 Posted at 12:11h in Commentary, Youth by Danielle Parenteau-Decker 0 Comments

(Photo by Taylor Wilcox on Unsplash)

In my sophomore year of high school, I was still looking for who I thought I was. I had little direction. Although I was on a good path for a better future, I found myself stuck between two worlds.

At school, I felt safe. There, my only responsibility was to turn in my work. Plus, I got to spend time with a lot of my good friends. But I always felt a sense of gravity weighing on me when I thought about going home.

One day at school, a man named Dennis came up to my friends and me and asked us if we were interested in taking part in a program called STAND! For Families Free of Violence.

“We talk about issues like domestic violence and abuse in teenage relationships,” said Dennis. “I think it’s great for young men to learn about these issues especially at your age and the times we live in.”

At the time, I wasn’t really aware of domestic violence. I initially thought it was a good idea because it got me out of my seventh period class. But it ended up being one of the greatest decisions I have ever made for myself.

We all said yes. The next time we saw Dennis he had another person with him: his teaching partner, Antonio Martinez.

When I saw Antonio, I saw a figure that I was missing in my life. At home, I was a turtle looking for its shell, a young man searching for peace in a world I knew I couldn’t control. Yelling and banging echoed throughout the house, sounds that would become embedded in my head. I shielded myself from a lot of things that were going on, but I could only go so far within the confines of my room.

STAND taught us about abuse in relationships and how anger travels from one person to another, how anger in the household can reanimate itself in the minds of its viewers. Dennis and Antonio helped me understand the pain I was feeling, the anger I knew was growing inside me, and why the world revolves around emotions.

Antonio became my older brother figure, one I lacked at home even though I’m the youngest of five boys in my family. Antonio showed me the value of emotional intelligence at a time when all I felt was fear.

>>>Read: School and Soccer Kept Me From Following My Brother to a Gang

Over the course of the school year, I grew attached to STAND because of what it stood for: students against teenage domestic violence. I continued the program into the following summer along with my friends. The summer program included students from other schools in Richmond. We went on numerous field trips including visits to the state Capitol and to a suicide hotline facility in San Francisco.

On our trip to San Francisco we made a stop at Mission Dolores Park. Here is where Antonio became a hand I could grab on while trying to escape the abyss I felt myself slipping into.

Antonio had all of us students stand in a line and take a step forward or backward depending on what scenario he said. He asked whether both parents are at home, if there’s a car at home, if you take the bus everywhere, if you ate every night.

All of us were at different points when Antonio asked, “Who believes they deserve to be successful?”

I stood still, not even giving the thought a chance to flower. When only a few students moved forward, a look of disappointment grew on his face.

He waited a few seconds then said, “If you don’t believe you can be successful, you’ll need be the best version of yourself. You have to believe in yourself more than anyone else does.”

Antonio’s words that day made me realize that I wasn’t who I thought I was, that I am so much more and that the only thing that defines me, is me.