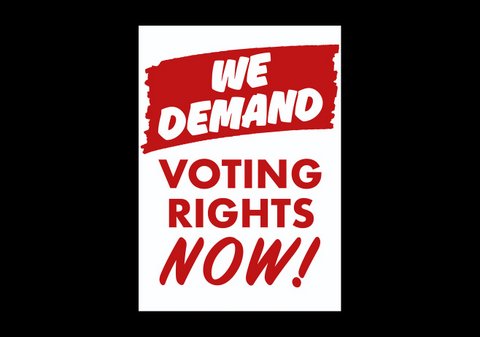 Posted at 11:39h in National, Politics by Danielle Parenteau-Decker 0 Comments

The Voting Rights Act first passed in 1965, two years after a sign like this was carried in the March on Washington. Today, the freedom to vote is still a contentious issue. (Image by @visuals on Unsplash)

Increased turnout among minority voters has caused major political shifts in the U.S., shifts some people in power see as a threat.

In response, they want to make it harder for people to vote.

A panel of experts said now is a monumental time for voters in America — particularly the underrepresented — during an April 30 discussion hosted by Ethnic Media Services.

“Voting rights in America are under attack like they haven’t been since the Jim Crow era,” said Wendy Weiser of the Brennan Center for Justice at the New York University Law School.

Those attacks are widespread. According to Weiser more than 360 voter-suppression bills, as of a month ago, were “aggressively moving through” the legislatures in 47 states. They “disproportionately affect and often target voters of color,” she said.

But people and organizations are fighting back.

Jacqueline De León, a staff attorney for the Native American Rights Fund and member of the Isleta Pueblo said Native American voters have filed nearly 100 lawsuits against voter suppression efforts with a success rate over 90%.

As promising as that sounds, it has drawbacks.

“Legislation is a blunt and expensive instrument,” said De León.

Efforts to suppress the right to vote come on the heels of unprecedented levels of voting by various minority groups in 2020.

“Our folks turned out in record numbers but still had to struggle,” said Hilary Shelton, director of the NAACP’s Washington bureau and senior vice president for advocacy and policy.

“The growth of the Latino vote is what has contributed” to political shifts in many states, “starting with California,” said Saenz, who said this state used to be anti-Latino.

De León pointed to the impact Native American voters have had.

“We’ve seen tribes make the difference in elections in Alaska, in North Dakota, Wisconsin and Montana,” she said. Arizona had a high turnout, too, she added.

That turnout was despite circumstances that make it “unreasonably difficult” for Native Americans to vote, including “unabashedly” racist officials, De León said. “In Indian Country, Jim Crow never left,” she said.

De León said many Native people have been forced into environments that impede their ability to vote.

First, she said, officials would “segregate them on remote and undesirable land.” Now, “many Native Americans live in overcrowded homes that don’t have addresses,” so they can’t get mail delivered. These homes can be located hundreds of miles from Departments of Motor Vehicles, post offices and other typical off-reservation voting sites. Getting to a polling place can be extremely difficult and voting by mail, impossible, she said.

But the barriers aren’t always so obvious. In fact, Shelton said Black voters’ biggest challenges are often “seemingly innocuous” such as requiring an official government ID to vote. Having an ID is a basic thing for many Americans yet inaccessible to many others. For those who don’t drive, in particular, it can feel like an unnecessary expense. So ID requirements can essentially amount to charging people to vote.

“A poll tax is a poll tax no matter what you call it,” Shelton said.

Some places employ intimidation tactics “to suppress the vote,” Saenz said. These include posting armed guards and having poll watchers inside polling places.

Shelton said voting should be easier, and people should automatically be registered to vote when they turn 18, similar to the selective service. “They can go to war, so why not register to vote so they can have a voice?” Shelton asked.

Two major pieces of legislation are in the works that could expand voting rights.

“The For the People Act would transform our democracy by making it fairer, stronger and more inclusive,” according to the Brennan Center.

According to the text of the bill, it would “expand Americans’ access to the ballot box, reduce the influence of big money in politics, strengthen ethics rules for public servants and implement other anti-corruption measures.”

The John Lewis Voting Rights Advancement Act would restore “the full protections of the original, bipartisan Voting Rights Act of 1965,” according to information on the website of Sen. Patrick Leahy (D-Vt.), who sponsored the bill.

Leahy also supports voting rights for the formerly incarcerated. Vermont, the state he represents, does not deny ex-felons the right to vote, while many other states do.

Shelton said that Leahy had once told him he would “go into jails to campaign.” Those who can vote are less likely to end up back in jail, Shelton added.

In the past, the Voting Rights Act has had a “long history of bipartisan support,” said Weiser. But these days, every issue seems to pit Democrats against Republicans, though that should not be the case here, the panel agreed.

When it comes to the right to vote, “no party has a monopoly,” Weiser said.

“The right to vote, the freedom to vote is fundamental to democracy,” said Yang. “It shouldn’t be a partisan issue.”