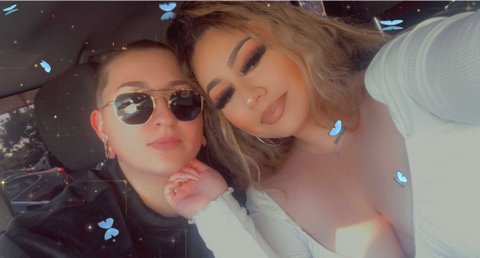 Karla Manzo, right, now lives in San Diego, but she is from Richmond, where she says she would not feel safe holding hands with her partner, Cassandra Bedoya, left. (Photo courtesy of Karla Manzo)

Hope was afraid to come out as nonbinary and queer because, when they were in high school, their uncle was almost beaten to death for being gay.

Then, two years ago, a supportive environment helped them feel safe enough to come out. Even still, Hope, a 24-year-old Richmond resident, asked to use a pseudonym for this story because they are afraid of harassment.

Similarly, Karla Manzo, who is a lesbian, said she didn’t feel safe in Richmond. Six years ago, she left Richmond for college in San Diego, where she found an LGBTQ community that she said has helped her live more authentically.

The 24-year-old said that if she were to bring her partner to Richmond, she would not feel safe “holding hands with her.” Manzo said she is afraid that people “might even throw stuff at us or just call us ‘disgusting’ or just turn us away.”

She didn’t feel safe coming out as lesbian in school because she was afraid she would be bullied or get in fights.

“Just the thought of coming out when I was 15 or like 13 or 10, never ever crossed my mind because even kids back then even got bullied by just wearing glasses, braces,” Manzo said. “Imagine that, coming out as gay in Richmond.”

Richmond Rainbow Pride — the city’s first LGBTQ organization — was started by members of the LGBTQ community in response to verbal attacks on openly gay council member Jovanka Beckles during the 2014 election cycle.

The organization holds an annual pride event the first Sunday of every June. This year and last, the pride event was held online because of COVID-19.

Cesar Zepeda, the founder and president of the Richmond Rainbow Pride, said he believes that Richmond has become a safer place as the LGBTQ community has become more visible.

“I grew up here. I am an openly gay man, and I feel comfortable and safe walking our streets, walking into different businesses,” he said. “There’s definitely places that might not always be safe and that’s in every single city, but overall the city of Richmond is a great place to be.” 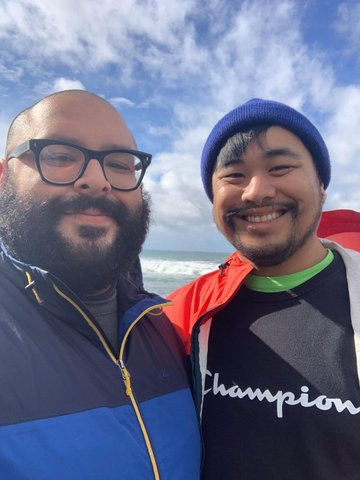 Andres Serrano, at left with partner Antmen P. Mendoza, said the slurs he heard as a gay person growing up in Richmond would sometimes send him to school in tears. (Photo courtesy of Andres Serrano)

Andres Serrano, a 33-year-old resident who attends Mills College in Oakland, said Richmond felt like an unsafe place for queer people when he was growing up.

“I was growing up in the late ’90s, early 2000s. I don’t think I felt safe. Being a child, being a teenage queer kid in Richmond. I definitely remember times just called slurs by random strangers,” he said, adding that he would sometimes go to school crying because of the way he was treated.

Serrano said he has lived his life “very openly, as a queer person” but is a little “hesitant” in Richmond because of the “years of trauma being called the F-slur.”

Serrano said the city could be more proactive and that just having a pride group is not enough to make LGBTQ residents feel protected.

Zepeda said changing policies and the way the city works with residents helps Richmond become a safer place. He said Richmond Rainbow Pride puts more attention on elected officials and “those that are appointed to different commissions.”

He also said Richmond’s LGBTQ police liaison helps members of the community feel safer when interacting with law enforcement. The position was created by the Police Department in partnership with Richmond Rainbow Pride. Zepeda said that the addition of the liaison helped boost Richmond’s score on the Human Rights Commission’s Municipal Equality Index. The commission is a leading national LGBTQ organization. The index looks at the laws, policies and services in a city and assesses how inclusive they are of the LGBTQ people who live and work there.

“Having someone that is like us on the other side of the phone, they’re more likely to understand our issues, our concerns,” Zepeda said. Otherwise, someone “might not necessarily either have the training or might not be as open-minded about the LGBTQI community.”

Although there are safe spaces for LGBTQ people in the Bay Area, Serrano says those spaces are not always welcoming to people of color.

What’s more, the spaces that do exist for queer people of color often involve alcohol or drugs, further excluding people with addictions or who simply don’t want to be around such substance use.

“I feel like it’s gonna be very dangerous knowing that the only spaces where I feel comfortable — where I could find people who are like me, where I can meet new people — are heavily centered [on] alcohol or drug usage,” Hope said.

Richmond does have a few safe spaces for its LGBTQ community, but Zepeda wants to see more.

He wants to give Richmond a center that would be open to the entire community and welcome LGBTQ members of all ages.

For adults, there’s Kaleidoscope Coffee, which is owned by an LGBTQ person. The cafe holds a monthly open mike for the LGBTQ community and is a safe place for people to “hang out,” said Zepeda.

Serrano wants Richmond to have a “space where queer, trans, gender-nonconforming” people can get “health services” and have the safety “to live their authentic selves.”

Navigating the health system is frustrating for people like Hope because they are misgendered, and their needs are not met as a result.

“We are significant enough to deserve resources for our people,” Serrano said. “This is Richmond, so also make sure you are creating space and listening to the BIPOC experiences too … Our community needs resources and support so that we can continue thriving [as] our queer selves here, in Richmond.”

If you or someone you know is LGBTQ and needs support, help is out there. See below for a list of local and national resources.

— RYSE Center — offers resources in education, health and wellness and other areas for Richmond youth.

— LGBTQ+ Suicide Prevention. Text TALK to 741741 to speak with a trained counselor.