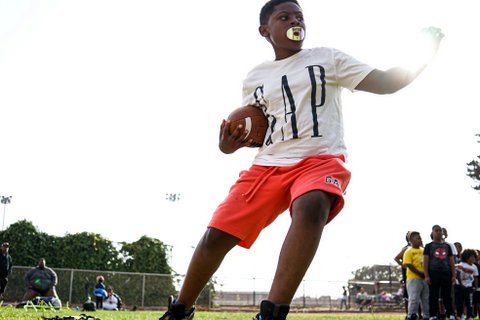 Posted at 09:00h in Sports, Youth by Danielle Parenteau-Decker 2 Comments

As his teammates surrounded 9-year-old Gerardo Campos, they clapped and cheered in support of his effort to take the last steps in a bear crawl drill during a San Pablo Cowboys conditioning practice at the West Contra Costa Boys and Girls Club on July 19.

Some even got on all fours and did the drill with him.

“Moments like that teach them that they are brothers,” Cowboys coach Deseandre Mapp said. 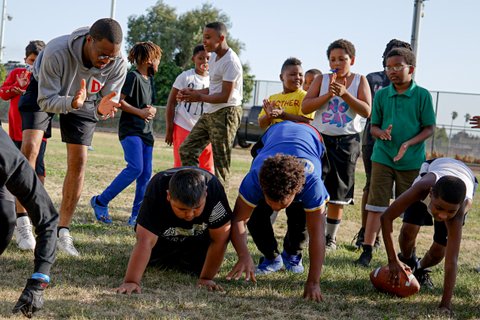 Gerardo is one of dozens of kids who have signed up for the Cowboys’ 2021 season. They have been conditioning two days a week in preparation for the upcoming American Youth Football league. But the Cowboys need more players.

“Right now we don’t have the numbers,” Mapp said.

Mapp and the rest of the coaches hope to get more kids signed up and onto the field before the season starts in September. They are also looking for parents or community members to join as volunteers.

“This year is just about competing and having fun,” Mapp said.

For 10-year-old Travon Dishmon, this season brings the opportunity to have fun with his friends, something that the pandemic took away.

“I just want to tackle my friends,” he said.

This is Travon’s first year with the Cowboys as he transitions from flag to tackle football. He said he isn’t nervous about it but is preparing himself knowing that he will have to be more physical and better conditioned.

His determination for the game is rooted in the hopes that he can follow in the steps of his older brother, who also plays football.

“My brother plays for UC Davis, so I’m trying to be like him,” he said. 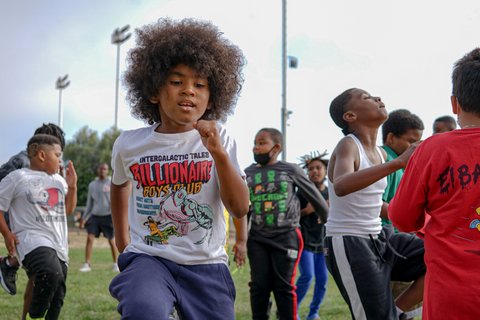 Coach Tonia Stinson, a 41-year veteran of youth sports in Richmond, said the focus of the program is to give kids a student-athlete mentality that can elevate their passions beyond video games and leisure.

“A lot of kids are couch potatoes,” Stinson said.

In football, the game, the plays and practice cannot be taken lightly. The kids’ attitudes and focus are challenged every time they step on the field. Even though football is a game and the youth will have fun playing, the field is still “a classroom,” she said.

“I used to be all about winning, but now it is all about developing,” Stinson said.

“We are starting from scratch,” Williams said.

But getting the kids on the field has been a relief to the kids, the parents and the staff.

As the kids practiced drills with Mapp, parents watched from the sidelines, in the stands and from the parking lot as they sat in their cars.

“It is so good to see the kids out there running around,” Williams said.

Conditioning practice will continue for four more weeks at the West Contra Costa Boys and Girls Club and will be held 5-7:30 p.m. Monday through Friday.

The cost to sign a child up is $200. Parents can start the registration process by calling Cowboys Athletic Director Andre Williams at (510) 978-6876.