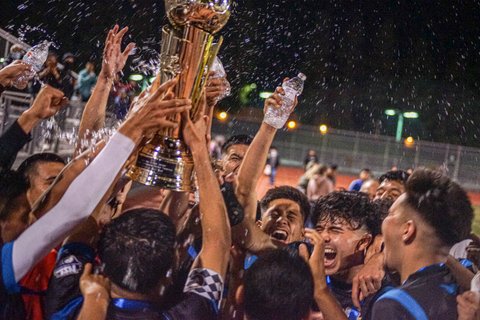 Posted at 16:01h in Sports by Danielle Parenteau-Decker 0 Comments

As San Pablo’s defense closed in, Carrasco kicked the ball past San Pablo goalie Alejandro Cervantes and scored the winning goal. With a late comeback, Atlético East Bay won the game and the title 2-1.

Just two minutes before, Carrasco, who came off the bench in the second half, had taken advantage of a loose ball inside San Pablo’s goal box to tie the game.

Within the last five minutes of the game, Atlético broke through and stamped their club into the history books as the first winners of the conference championship, which was held at Burrell Field in San Leandro on July 24.

After the final whistle blew and the stands erupted in cheers, Atlético coach Bejan Esmaili Sr. said his team had to play on the defensive for much of the game.

“The game was very aggressive and feisty,” Esmaili said. Many plays ended in Atlético players knocked down or pushed away from the ball as San Pablo players used their physical advantage. That forced Atlético to play aggressively in return, which did not produce scoring opportunities for them in the first half.

This loss of rhythm for Atlético lasted all the way to the second half. San Pablo forward Carlos Armendariz opened the scoring in the 72nd minute after receiving a through ball that left him one-on-one with Atlético goalkeeper Luis Felix.

“It took us the last 15 minutes to get our flow,” Esmaili said.

Within those final minutes, Atlético settled down and began to build up play from the back, passing from player to player and moving up the field.

“We had plenty of time,” Esmaili said as he described the faith he had in his team’s discipline and his pregame prediction.

“Before the game I told [Carrasco] he was going to score two goals for us,” he said. “I had a feeling about him because he has been so focused during training.”

Carrasco, a Sacramento native, previously played for UC Berkeley and Sacramento Republic FC, a professional team. He played the first three games of the season with the Berkeley-based Atlético while living in Sacramento before temporarily leaving the team. He recently moved back to Berkeley and rejoined Atlético as they made their way into the playoff tournament. Esmaili said he believed Carrasco would pick up where he left off — as the top scorer in the league with 10 goals in three games.

But Atlético’s success did not come solely on their merits. San Pablo’s aggressive play cost them defender Kevin Sanchez who got his second yellow card around the 70th minute.

“When you are in a championship game, you don’t think if you have a yellow or not,” Sanchez said as he watched the game from the sidelines.

As the momentum built for Atlético, the 10-man San Pablo squad had a hard time controlling the game. Trying to slow down the game instead of trying for another goal was their biggest mistake, Cervantes said.

“Our team tried to waste time. We weren’t getting the ball and didn’t finish the game strong,” he said.

During the second half, Cervantes made multiple saves to keep the score 1-0 in San Pablo’s favor. But, he said, saves alone can’t win games, and in the end, Atlético pressed harder and were more hungry.

The high intensity game saw a scuffle after the final whistle as players shoved one another. After the players calmed down and the trophy ceremony commenced, NSL Pacific Conference Commissioner Nick Arellano thanked both teams for their part in bringing high quality semi-pro soccer to Northern California. 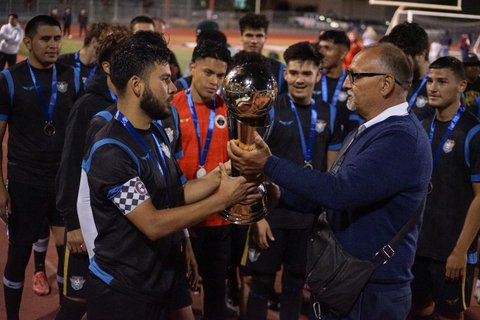 He congratulated San Pablo for being the winners of the Pacific Conference league trophy as it was the top seed in the regular season and handed them second place medals for the championship game.

Arellano then grabbed the Pacific Conference championship trophy and handed it to Atlético captain Roberto Gonzalez who raised it in the air as his teammates jumped up and down.

“We were the youngest team in the league, and a lot of people thought because we are young, we might not play as hard,” Gonzalez said in an interview after the game. “And when they scored a goal, we kept our head up and scored two back.”

Atlético will go on to represent the NSL Pacific at the NSL National Championship in Florida in January 2022.