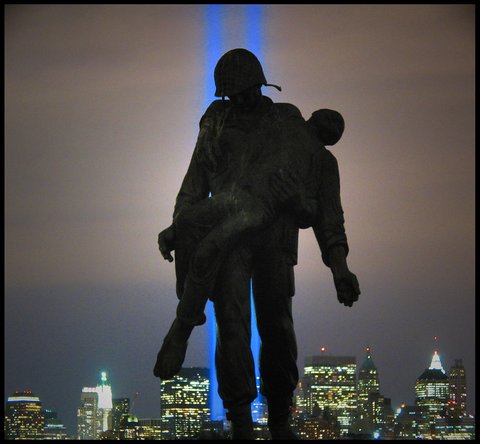 Posted at 09:00h in Commentary by Danielle Parenteau-Decker 0 Comments

I was only five months old on September 11, 2001, and I first learned about the events when I was 6. I was watching TV with my dad when he changed the channel to a program showing what happened that day. I saw planes, which I had hardly seen before, fly into buildings. I remember not feeling shocked and my dad being silent. It wasn’t until I saw people jumping from the buildings that my eyes began to water. Their bodies falling seemingly without limbs moving haunts me even now. But back then, I thought, “please, let them fly.”

I learned the word “terrorist” and saw people associated with it on the news. I didn’t feel much attachment, but as years went on and more 9/11 broadcasts were shown every Sept. 11, I noticed more and more paranoia on the news and more of that word: terrorist. This constant broadcasting, like propaganda, imprinted fear in my young mind.

Looking at it now, I may be desensitized because almost every movie advertised showcases huge explosions. My dad told me stories of traveling before 9/11 — how easy it used to be to get around, to see the world. But after the attack, this nation put up more security, and along with that came more alienation. Alienation that had been practiced before and created hate.

In elementary school and middle school, jokes about any Middle Eastern kid blowing up the school were so common. Even the kid being made fun of would join in on the joke. I think it’s because it was the only way he could relate to the other students. Maybe many of these jokes were made between friends and had no ill will, but saying something enough can make anyone feel like it’s true. These jokes perpetuated not only racism but the idea that these kids, who have no idea why the attacks happened either, could do the same harm. It would continue into high school, and I’m fear it will continue to go on, sadly, for a long time.

I didn’t know anyone personally who died on 9/11 or even someone who lost a loved one that day, but I know it must’ve felt horrible to see that unfold. Thanks to social media creating more outlets for information, I was able to learn very sickening things that I feel were hidden from me for most of my childhood. The aftermath of the events on 9/11, some time later, resulted in military occupations in the Middle East. These were wars for oil, but in the name of those who died on 9/11. I don’t think the wars in the Middle East or soldiers losing their lives is justified at all, but it’s presented to us as defending the U.S. and its citizens. So many lives lost: parents and children alive one day, then the bombs drop.

It makes me very uneasy to see so many people die for oil and wealth, when we should be remembering those who died on 9/11. Instead, the U.S. government is creating more death and destruction. Is oil worth the same as a life? Propaganda has been pushed on us all. I’d much rather see the families who lost their loved ones on 9/11 be given compassion and empathy.

I remember the feelings I felt seeing people falling from buildings, but now when I think of 9/11, I think of the families killed by American bombs, and I can’t separate the two. Both involve attacks and death. The night I watched the 9/11 memorial with my dad, I lay in bed with so many questions. Why did it ever happen? Are the people that died OK? Will I die the same way? I cried that night because I was scared — scared of falling from buildings, scared of buildings collapsing on me, scared of burning.

Events like 9/11 have ripples that go through time. It’ll always be stuck in our heads, what happened that day, even if we were too young to remember it.

My mom shows more anger toward 9/11 than my dad does. I remember her telling me about when she saw it live on TV. My older brother, who was only 4 at the time, asked, “What’s that, Mom?” She told me she was scared, feeling fear or dread. She went on to tell me that when she saw the planes hit both towers, she thought the whole country was under attack.

But to grow up and learn of it and what happened after, I have a different perspective on it than my mom. Like my dad, she lived in this country before 9/11 but I’m from a post-9/11 world. I’ll never experience a year where channels don’t broadcast two airplanes crashing into two buildings. I fear I’ll never know an America without hypervigilant national security. For those of us who grew up in the shadow of that day, 9/11 has shaped the world we were raised in.