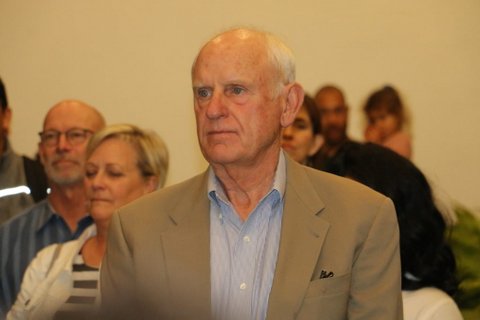 By Nazmul Ahasan | This story was originally produced by Richmond Confidential and has been republished with permission.

Richmond Mayor Tom Butt, who has spent more than a quarter century in public office, said Thursday that he won’t run for office again after his term ends in January 2023.

“No, no, I’m done,” he told Richmond Confidential, when asked about his political future. “I have no plans to run for anything anymore when my term as mayor ends.”

The longest continuously serving council member in Richmond’s history, Butt has been on a collision course recently with his progressive colleagues, whose bloc — the Richmond Progressive Alliance — holds the majority. His relationship with top city officials including City Manager Laura Snideman and City Attorney Teresa Stricker also has soured, significantly constraining his ability to press ahead with his agenda.

Butt, 77, is finishing his second term as mayor, and under the city charter, could not run for another term. But he could run for City Council, where he served for 20 years before becoming mayor.

A Vietnam veteran from Arkansas, Butt came to Richmond in 1973 and set up the architectural firm Interactive Resources. He was elected to City Council in 1995 and ran successfully for mayor in 2014. The mayoral election was seen as a David and Goliath contest, with Butt — then the progressive candidate — defeating Nathaniel Bates, whose campaign was heavily supported by Chevron’s Richmond refinery, the city’s largest employer and a recurring source of pollution. Butt made national headlines with the win and, for a time, enjoyed a honeymoon period on council.

Since his reelection in 2018, the political tides have turned, putting him at the losing end of many council votes. As Butt has moved more to the center, the council has shifted to the left, with the Richmond Progressive Alliance winning a majority in the last election. Ironically, Butt’s staunchest ally has been his former rival, Bates.

In the past few months, Butt has become even more isolated, after pushing unsuccessfully for the resignation of both the city manager and city attorney. He has accused them of using taxpayer money to investigate whether he steered city business to his architectural firm — a claim that hasn’t been made publicly and which Butt denies. The council voted 5-1-1 in June to retain Snideman and Stricker, with Butt casting the only negative vote.

Butt has taken a particular interest over the years in preserving Richmond’s history and has had a hand in rebuilding and preserving some of Richmond’s iconic historic sites — the Hotel Mac, the East Brother Lighthouse and the SS Red Oak Victory, among others.

He has long been involved in the Richmond Rotary Club, Boy Scouts of America Herms District and many veterans’ causes. When the Richmond Unified School District declared bankruptcy in 1991 and closed the schools six weeks early, Butt and other parents successfully sued the state to keep the schools open.

Butt followed his father and grandfather into public service. His grandfather was the mayor of Eureka Springs, Arkansas, a small city in the Ozark Mountains, and a state senator. His father was a longtime Arkansas judge. Butt’s public service started when he joined the U.S. Army Corps of Engineers in 1966, and he later served in Vietnam. That tradition of service carried into the next generation. Butt’s son, Andrew, who also is an architect, has served on Richmond commissions and boards, as has Butt’s wife, Shirley. His other son, Daniel, is a lawyer in Richmond.

After leaving office, Butt intends to keep working as an architect, saying, “There’s a great deal of satisfaction doing a project and seeing it completed and being able to move on to the next one.”

That, he said, is very different from politics, where “nothing ever gets completed.”