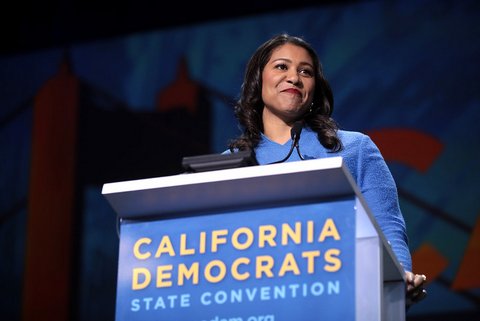 Black women such as San Francisco Mayor London Breed were instrumental in Gov. Gavin Newsom’s defeat of the recall campaign against him. (”London Breed” by Gage Skidmore via Flickr, under CC BY-SA 2.0 license)

When California Gov. Gavin Newsom woke up Wednesday, Sept. 15, 2021, I hope he fell to his knees and said, “Thank you, God, thank you, Black women.”

To be sure, there are many others to thank, from the energized Chicanx/Latinx community to the Democrats who surged to the polls at the last minute. Some of the more prominent who thronged to his side were Black women, including Vice President Kamala Harris, Congresswoman Maxine Waters, Congresswoman Karen Bass, L.A. County Board of Supervisors member Holly Mitchell, San Francisco Mayor London Breed and California Board of Equalization member Malia Cohen. Others included grassroots women whose names you’ll never know but whose work was invaluable. They organized the get-out-the-vote drives. Street fairs. Voter awareness events in parks and playgrounds. They were determined that the recall effort would fail and even more determined when talk show host Larry Elder jumped into the race as the conservative favorite.

Those who worked for Newsom weren’t necessarily his biggest fans, but they appreciated all the work he has done to develop a progressive agenda. They applauded his appointment of Dr. Shirley Weber as secretary of State. They appreciated his support of Harris and President Joe Biden. Despite his flaws and unforced errors (like the French Laundry debacle), they appreciated his leadership on COVID matters. And they turned up and turned out, although with laggardness that put the outcome of the recall in doubt, especially in mid-August when Elder was polling very close to Newsom.

Democrats ought to be ashamed that things got that close. In a state that has twice as many Democrats as Republicans, there should never have been a question about the outcome of the vote. Frankly, there never should have been a recall election. But if Republicans can’t get their way the old-fashioned way (by winning), they’ll try the renegade way: by stealing. So, we were treated to allegation after allegation of voter fraud before a single ballot had been counted. We heard reports that some partisan poll-watchers were aggressively challenging voter signatures in the name of preventing fraud. Republicans have been able to gain all these advantages because Democrats, in a phrase, have been sleeping.

President Joe Biden would be the first to assert that Black women made a difference in the 2020 election. Women like LaTasha Brown, Melanie Campbell, Barbara Arnwine, and so many others crisscrossed the country, urging people to get out and vote. Sometimes it wasn’t an easy case to make. Biden has been in public office long enough to have a record that energizes some and causes others to cringe. Too many Black men (around one in six) believed the hype and voted for Trump. As hard as that is to understand, it is reasonable to note that Black people are not a monolith, and we don’t vote in lockstep. That makes the Republican embrace of arch-conservative Larry Elder (he would have given reparations to slave owners) all the more cynical.

Some Republicans see Elder as the new face of conservatism. Others see him as a Black man who can hoodwink Black people into voting against their interests. One critic described him as “white supremacy in Blackface.” She was kind.

Elder is coyly considering a gubernatorial run against Newsom in 2022. He may have some momentum, having garnered 46% of the votes to replace Newsom, but given that Californians soundly rejected the recall effort, will he have the numbers? His 46% of the 37% who voted in favor of the recall amounts to a paltry 14 % or just one in seven votes. The California recall process distorts both the voting outcome and Elder’s relative unimportance.

Still, Elder isn’t going anywhere. The popular talk-radio host is likely to use his electoral experience to expand his audience and ratings. And with the help of Fox News, he may multiply his base. There is little or nothing that Democrats can do about Larry Elder, but there is plenty that we can do about pushing a Democratic agenda.

Democrats, just do your work. Organize, strategize, keep the momentum going. Stop thinking that you have to “play nice” with Republicans because they sure ain’t playing nice with you. If you care about health care, education, clean air and water, economic justice, call it out. And if you care about the political space in which we live, say thank you to the Black women who helped make it happen.

Dr. Julianne Malveaux is an economist, author, and dean of the College of Ethnic Studies at Cal State L.A. Reach her at juliannemalveaux.com.