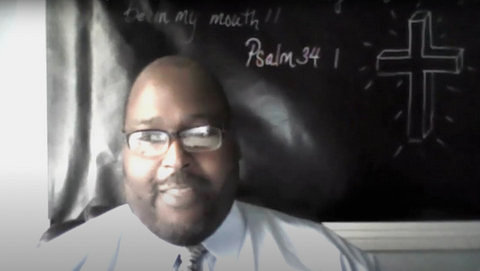 The Rev. Steven Shepard went from denying the vaccine to helping his congregants get vaccinated against COVID-19. (Screenshot captured by Danielle Parenteau-Decker / Richmond Pulse)

Alva Brannon’s doctor told her she would die if she got COVID-19. The Rev. Steven Shepard says he was “at COVID’s doorstep of death.” Neither one wanted to get the vaccine. Then, they changed their minds.

Brannon and Shepard shared their journeys from vaccine skeptics to champions as part of a panel of Black people discussed vaccine hesitancy. The panel was part of a Sept. 21 Ethnic Media Services press briefing.

“You need to get the vaccine because there’s nothing else to keep you from having [COVID-19] and being critically ill,” Brannon said she told her children and grandchildren after she got the shot. She has three children, five grandchildren and seven great-grandchildren.

Her urgings were a far cry from her original attitude toward the vaccine.

Brannon has pulmonary hypertension, high blood pressure and diabetes, all of which made the coronavirus especially dangerous for her. Yet she told her doctor she didn’t want the vaccine. When he said her life was at stake, she brushed him off. “Well, I am going to die anyways,” she said.

Her feelings on the matter could be traced, in part, to the infamous U.S. Public Health Service Syphilis Study at Tuskegee. For decades, researchers withheld treatment from hundreds of Black men with syphilis — including Brannon’s father, who was one of the subjects. As a consequence, Alva was born with syphilis, something her family did not know until it blinded her when she was 7. (A cornea transplant at 15 restored some of her vision.)

After the COVID-19 vaccine first became available, she told her family not to get it. “It’s going to do something horrible to us,” she said.

But Brannon’s daughter wasn’t swayed. She told her mother about the one-shot Johnson & Johnson vaccine and asked her to think about it. Three days after that conversation, Brannon got a call from her church, saying the Johnson & Johnson shot was being offered there.

“I took it as a symbol from God that it was time,” Brannon said.

At first, she said her family kidded her about it. One relative told her to “call us every day to see if you grew an extra limb,” Brannon said, laughing. But the jokes subsided and she pushed the holdouts to get vaccinated. And it worked.

“All of my family has been vaccinated except one child and one grandchild that can’t because she’s highly allergic and her doctor said that they wouldn’t recommend that she get the vaccination,” she said.

Dr. Michael LeNoir of the African American Wellness Project said that having older people like Brannon talking to their friends and families and encouraging them to get vaccinated is important.

Shepard, pastor of the St. Paul AME Church in San Bernardino, said he was wary of the vaccine, in part, because of “issues that we as Black folk deal with — not just the historical background … but how we’re treated every day when we go into doctors’ offices or to ER rooms.”

Eventually, though, he said he decided the vaccine was right for him.

“I was so into dealing with what happened in the past that I did not take the time to realize the science behind and those behind the vaccine,” he said. “And when I found out and did my research, I found out that those things that had me scared about the past, I should not be worried about now for the vaccine.”

Now, he wants to use his pastoral position to get more people educated and vaccinated.

“It was my job … when I was released from the hospital … to make sure that our community had the right information,” Shepard said, referring to his time seriously ill with COVID-19. “The Bible tells us that our people perish from lack of knowledge.”

He said his goal is to provide “hope, help and healing to an underserved community that suffers from health disparities.”

Cheryl Brown, a former state legislator and co-founder of Black Voice News, praised Shepard’s work. “His leadership is what’s changing the trajectory of this vaccine in our community,” she said. Brown is also part of the AME church social action commission.

Shepard’s church has also served as a vaccination site. He said he heard from people who got vaccinated because the church is considered a trusted messenger and a friendly environment to come and get the vaccine.

Brannon reiterated the importance of the church in her decision to get vaccinated.

That “brought the belief and the trust,” she said. “Otherwise, I would not have received the vaccination still if it had not been at my church and my daughter convincing me.”

To reach more people who are against or wary of the vaccine, Dr. Oliver T. Brooks said consistency in messaging is vital. “We need to hear the same message over and over: The vaccine is safe and effective. There was no conspiracy,” said Brooks, the chief medical officer of the Watts Healthcare Corp. in Los Angeles.

Twenty-one-year-old rapper and student Christopher Hargrove-Thompson is doing his part to spread the word among young people in particular.

The video — an unfinished version of which was shown during the briefing — depicts a masked Hargrove-Thompson walking through CVS, on his way to get the shot. It ends with this onscreen message: “For more information on vaccination visit cdc.gov/vaccines.”

Hargrove-Thompson and his friend, roommate and collaborator Nick said young people are exposed to too much misinformation about the vaccine on social media. (Nick, who is white, appeared with Hargrove-Thompson during the briefing, but his last name was not given.)

For every single thing that would “reaffirm the positive reasons of vaccination, there were a thousand negative ideas on social media,” Hargrove-Thompson said.

>>>Read: I Faced Down Fear and Misinformation to Get Vaccinated

LeNoir also addressed the role of social media in anti-vax attitudes while comparing those who don’t want the vaccine to COVID-19 variants.

“They’re tougher, they’re more resilient, they’re more entrenched, they have reasons that they believe are true and, consequently, it makes it more difficult to persuade them to get a vaccine,” he said. “They’re reinforced by friends and peers and online communities like Clubhouse, Instagram, TikTok.”

Nonetheless, Black people, generally, are “not the loud, vocal, protesting anti-vaxers that we see,” Brooks said. “It’s more of a personal, not political, decision.”

“You can look at the past, but you got to live in the present, and the way to do it is to evaluate the information and then utilize that information to move you forward.”