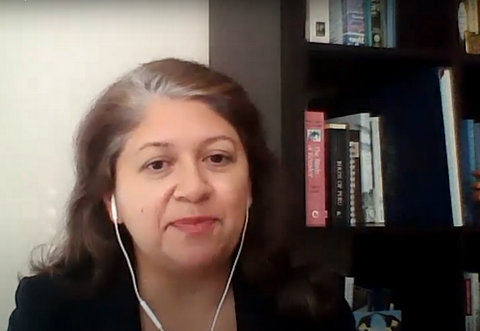 Monica Vaca of the Federal Trade Commission discussed the findings of a five-year report on scams perpetrated against communities of color. (Screenshot captured by Danielle Parenteau-Decker)

The impacts of scams and fraud on communities of color were outlined by two Federal Trade Commission representatives during an Oct. 22 Ethnic Media Services press briefing.

“Since 2016, we’ve brought more than 25 actions where we could identify conduct that either specifically targeted or disproportionately impacted communities of color,” said Monica Vaca, associate director of the division of consumer response and operations in the FTC’s Bureau of Consumer Protection.

Attempts at fraud can come from close to home or far away. It can also come from individuals, organized crime rings or supposedly reputable companies.

In 2019, the FTC began investigating Amazon before a filing a lawsuit this year that alleged the corporate giant withheld tips from Flex drivers, who primarily make Prime Now and Amazon Fresh deliveries using their own vehicles. Amazon said drivers could earn $18-25 per hour plus 100% of tips, according to the FTC. From 2016-19, “customers thought they were tipping their drivers, not Amazon,” Vaca said. “But the drivers were left shortchanged.”

The FTC charged that Amazon used those tips to supplement base pay. Even though hundreds of drivers complained, the practice allegedly continued until Amazon learned it was being investigated.

This week, the FTC sent out refunds after Amazon and the FTC had earlier reached a $61.7 million settlement — enough to pay back the tips owed in full.

Vaca pointed out that people of color are overrepresented in the gig economy.

A week before the EMS press briefing, the FTC issued a report on how different consumer issues affect different populations.

FTC attorney Rosario Mendez said the report is based on contributions from cases submitted to reportfraud.ftc.gov and complaints from agencies such as attorneys general offices, other law enforcement and the Better Business Bureau.

“Those reports are so critical,” Vaca said. “They’re so important to us because they give us a window into the marketplaces that different people are experiencing.”

Mendez said an FTC economist analyzed 2020 reports and census demographic data in an attempt “to get a sense of who was complaining to us, from what communities, what they were complaining about.”

Complaints submitted to the FTC don’t collect information on race or ethnicity, so the agency turned to examining census data to identify issues cropping up in neighborhoods with mostly Black, Latino or white populations.

Asian and Native American populations were excluded from this analysis because there were not enough neighborhoods with them as the majority to provide significant data. But Vaca said both communities are targeted with bogus health claims such as “cures” for COVID-19, cancer or diabetes that don’t help at all. She mentioned the FTC has seen false advertisements in Korean or Vietnamese for COVID-19 treatments or cures.

And in the Tate’s Auto Group case, the FTC alleged that four car dealerships used false advertising and falsified income and down payment information on vehicle financing applications. The auto group frequently ran print and radio ads in Navajo media. The case, which was filed in 2018, resulted in a $450,000 settlement this July.

In another case, the FTC alleged that Bronx Honda and its general manager told salespeople to “charge higher financing markups and fees” to Black and Latino buyers. The New York City car dealership also “changed the sales prices on paperwork in the middle of a sale without telling the consumer, and they double-charged people on taxes and fees without their knowledge,” Vaca said. It also told people they had to pay fees that weren’t actually required.

The FTC is sending nearly 4,000 affected people refunds of about $371 each following a $1.5 million settlement reached with Bronx Honda last year.

The agency found that the most common form of fraud in majority-Black neighborhoods involved credit bureau scams.

“Frequently, these are problems relating to trying to get something inaccurate off of a credit report, those types of issues,” Vaca said.

For whites and Latinos alike, the most common type of fraud was impersonator scams. A typical example of these scams is when someone pretends to be from an agency such as the IRS or the electric company. The scammers claim there will be consequences if the targeted person doesn’t pay up immediately.

Other common impersonator scams involve striking up a romantic relationship online or pretending to be a relative — then asking for money.

“These are scammers on the phone,” Vaca said. “They will say anything, anything to get money from people.”

If you do pay money to a scammer, “it does matter how you pay,” Mendez said. Credit cards offer the most fraud protection, while other payment methods may provide little or none at all.

“It’s hard to get money back when you’ve been defrauded, but it’s not actually impossible,” she said. “So what we tell people is try, try. File your report and try.”

If you believe someone has defrauded you or even attempted to, you can file a report in English at reportfraud.ftc.gov or in Spanish at reportefraude.ftc.gov.

The FTC offers a variety of resources to help consumers, Mendez said. These include graphic novels in Spanish and other free publications, the Pass It On campaign, tips for buying a new car or a used car, and consumer.gov, which provides “very simple, basic consumer protection information.”