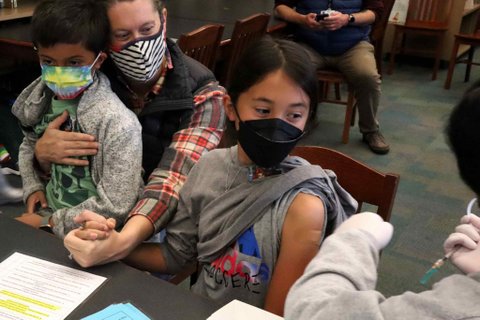 13 Nov ‘It Goes Quick’: Young Kids Roll Up Their Sleeves for Vaccines in Contra Costa

Posted at 07:05h in COVID-19, Health by Danielle Parenteau-Decker 0 Comments

Ashbey Asuncion, 9, and Avery Asuncion, 6, with their mother, Sarah Asuncion, got the COVID-19 vaccine at Nystrom Elementary.

What 9-year-old Ashbey Asuncion was looking forward to the most after getting her COVID-19 vaccination was going outside without wearing a mask and teaching her younger brother how to do a cartwheel.

She and her brother, Avery, 6, got their first doses of the Pfizer COVID-19 vaccine at a clinic in Nystrom Elementary School in Richmond on Tuesday, one of the first Contra Costa Health Services’ clinics open to children ages 5 to 11. Health Services has partnered with a variety of health care providers to bring free vaccine clinics to schools and communities across the county over the next few weeks.

Health Services administered 77 vaccines at Nystrom, 61 of those to elementary-school children. It hosted two other clinics at San Pablo elementary schools on Tuesday, giving out 52 vaccines at Highland and 60 at Tara Hills.

Last week, the Centers for Disease Control and Prevention began recommending the Pfizer vaccine for children ages 5 to 11, after the Food and Drug Administration provided emergency authorization. 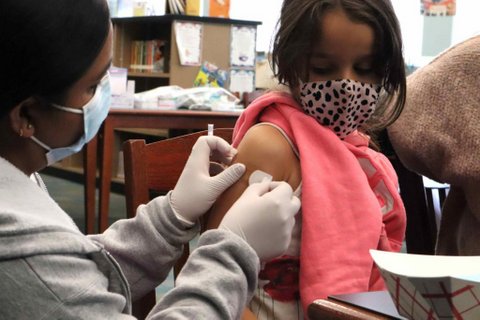 Venus Bafaee, 6, gets her first shot.

Health Services and the county’s Office of Education have been providing parents with information on the pediatric vaccine and have held town hall sessions to address concerns, according to county Deputy Health Officer Dr. Sefanit Mekuria. Many of the questions Mekuria fields from parents are about studies on the vaccine’s effects on children.

“There’s a lot of misinformation out there, so we want to make sure people are getting the right sources,” Mekuria said.

At Nystrom, four vaccine stations were set up, and by 3 p.m., a line of children and parents waited. Disney songs played in the background and cookies awaited kids who bravely rolled up their sleeves. Some children cried and curled up in their parents laps to avoid looking at the needles. Most held a parent’s hand.

After Ashbey and Avery had their shots, they went into the recovery room — a classroom where children were monitored for any allergic reactions. While she folded up her napkin, cookie completed, Ashbey said she was relived that the shot was over.

“It doesn’t really hurt much,” she said.

Sarah Asuncion, their mother, held onto Avery while he got his shot. Both of the Asuncion children attend Prospect Sierra School in El Cerrito, but Sarah Asuncion said she and her husband had trouble finding vaccination appointments and that the Nystrom clinic was the most convenient. Another advantage to attending the school clinic was that her children were more comfortable there.

“I think it’s nice to have all little kids in a place, so they can see other kids doing it,” Sarah Asuncion said. 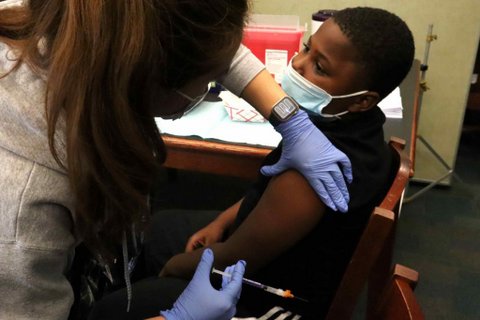 Seeing other kids get the shot helped ease Kahreem Harris’ nerves, though his grandmother said he didn’t need convincing.

It helped 12-year-old Kahreem Harris to watch a classmate get the vaccine ahead of him. Nervous at first, he loosened after seeing the jab to the arm.

Kahreem was at the clinic with his grandmother, Beverly Russel, who was already vaccinated. Protecting her health is a big concern for Russel, who is 65 years old and often visits her 92-year-old mother. COVID-19 health risks are higher for those over the age of 50, according to the CDC. She said she did not have to talk her grandson into getting the shot.

“He wants to get it. He’s old enough to listen to the news and everything that he hears, and then he has to protect me a little bit too, because he lives with me,” Russel said.

After the shot, Kahreem said his arm stung a little but not much. He wanted other kids to know it didn’t hurt and that they shouldn’t be scared to get it.

Older children in the West Contra Costa Unified School District have to be vaccinated by the end of the month. The school board passed the mandate Sept. 30, requiring vaccines for children 12 and older. Within hours of the vote, Gov. Gavin Newsom announced that a statewide mandate would go into effect the school term after a pediatric vaccine gets full FDA approval, which Newsom’s office has said likely won’t be before July.

Throughout October, Health Services partnered with WCCUSD to bring mobile vaccine clinics to middle and high schools in the district. As of this week, nearly 90% of the county’s children ages 12 to 15 have received a shot, according to the county vaccine dashboard. Only about 1% of younger children have been vaccinated, with that number climbing as more clinics come online.

[RP editor’s note: Since this article was initially published Wednesday by Richmond Confidential, that number has indeed climbed. As of Friday, 10% of kids between the ages of 5 and 11 in the county have gotten a vaccine dose.]

Clinic locations, dates and times are on the county’s COVID-19 website.

This story was originally published Nov. 10, 2021, by Richmond Confidential. It has been reproduced with permission.