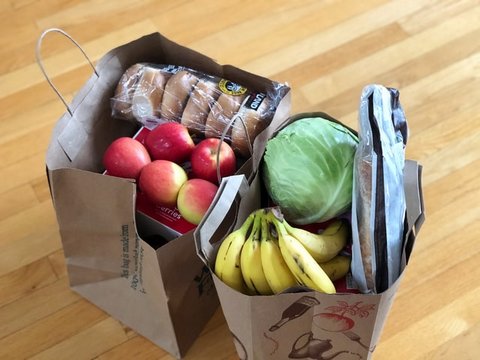 By Olivia Lozano for Richmond Confidential

To bring awareness to food insecurity issues, this month the California Association of Food Banks launched a new statewide anti-hunger initiative called Everyone to the Table.

The interactive public engagement campaign encompasses print, social media, radio, online, and TV and can already be seen on billboards across the state and on digital platforms like Instagram and Facebook. The social media format allows people to take part in advocacy through graphics that can be posted on their accounts and shared using hashtags such as #EveryoneToTheTable and #EndHungerCA. People are encouraged to tweet @CAFoodBanks with their advocacy messages.

About 8 million people in California face food insecurity, according to CAFB. And lower-income families are at higher risk of malnutrition. Almost a third of Black Californians and more than a third of Latinx families are food insecure, prompting the need to expand CAFB’s campaign to reach more multilingual and multicultural populations. The Food Bank of Contra Costa and Solano offers translation services on its website and runs ads in Spanish on Telemundo and Facebook.

Keva Dean knows what it’s like to be hungry. After moving to California in the 1990s, Dean faced eviction and homelessness, and struggled with crippling mental illness. A victim of domestic abuse, she was forced to leave a job that was supporting herself, two daughters, two nieces, a nephew and a now-ex partner.

“I don’t remember a specific day, but I remember that we didn’t have any money,” Dean said.

She recalled hopping into her van and driving 37 miles from Antioch to Oakland to pick up food from famed humanitarian, ‘Mother’ Mary Ann Wright.

“I remember her giving me a big black plastic bag full of day-old pastries,” Dean said. “I took those back home, and I had a few dollars, so I went to get some ramen noodles. And that’s all me and my kids ate for about a week because we had nothing else.”

She eventually received benefits from CalFresh and the Special Supplemental Nutrition Program for Women, Infants, and Children. Today, Dean is a certified family development worker in Contra Costa County.

Since the start of COVID-19 pandemic, food insecurity has tripled among households with children, according to a 2020 report by researchers at Northwestern University. CAFB served over 1 billion pounds of food during the past 18 months, which, according to California Assembly Member Buffy Wicks, was a 74% increase. Stacia Hill Levenfield, the association’s CEO, noted that without the investments put into public nutrition before the pandemic, California would have seen a larger spike in hunger. Because of the hard work of California food bank employees, volunteers, and donors, the association was able to keep up with the demand.

Through her work with families, Dean has noticed a common problem her clients faced during the pandemic: They couldn’t get to food distribution centers because of a lack of transportation. Some also had their CalFresh benefits stolen by computer hackers. And since benefits are accessed through the internet, many recipients who lack Wi-Fi or computers are cut off from technical support and the precautionary measures found on the websites.

This spring, Gov. Gavin Newsom proposed $30 million in one-time funding for food banks in California to fill gaps widened by COVID-19. When the budget passed in July, it included $292 million in one-time funds to address food insecurity: $110 million for food banks to purchase more food; and $182 million to increase storage, refrigeration and distribution. The investment will better protect food banks during climate and other emergencies, said Cassidie Bates, public policy and advocacy manager for the Food Bank of Contra Costa and Solano. That is important for the two counties, which are prone to dry summers and rainy seasons.

“We can’t go back to ‘normal’ because normal wasn’t working for us,” Wicks said during on Oct. 5 webinar on the issue. “We don’t want to go back to that. We want to do better, and that’s what this campaign is about.”

Information on how to help is at everyonetothetable.org.

This article was originally published Nov. 24, 2021, by Richmond Confidential. It has been reproduced with permission.