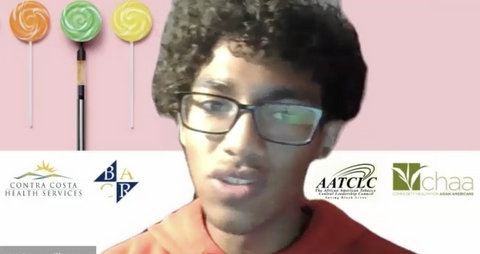 Before sitting down with the Pulse, high school student and runner Nathan Hill Meza, 17, talked about the effects of flavored tobacco on young people for an ethnic media briefing. (Screenshot captured by Julia Métraux / Richmond Pulse)

As someone who runs track at Clayton Valley Charter High School in Concord, 17-year-old Nathan Hill Meza knows that he needs to take care of his physical health to be a successful athlete.

This means, unlike some of his peers, Hill Meza has stayed clear of vaping. Flavored tobacco products, celebrities vaping, and products being accessible in communities are some of the many reasons why teenagers have turned to vaping. A February 2021 JAMA Pediatrics report found that around one in five teenagers vape. Black teenagers were initially less likely to use e-cigarettes than their white peers, but Contra Costa County is concerned about the rising number of teens vaping in its communities.

Despite being targeted towards teenagers, e-cigarettes have been associated with lung injuries and other health issues, according to the Centers for Disease Control and Prevention.

Hill Meza said he has learned through conversations with friends that some of his peers vape to fit in with others or as an unhealthy coping mechanism to deal with the challenges and stresses of going to high school while living through a pandemic.

Hill Meza, who lives in Pittsburg and is Black and of Mexican descent, sat down with Richmond Pulse over Zoom to discuss vaping among his age group and the need for more mental health support for teens.

Richmond Pulse: As an athlete, why it is important for you not to vape to take care of your physical health?

Nathan Hill Meza: Your body’s a temple. [It] is very sacred. It can be very resilient and very, very vulnerable. I believe to get the best potential out of it, it’s better to stay crystal clear of any usage of any kind of drug, nicotine, smoking, XYZ. Especially for me, running the 400 and the 800 [meters], I really need my lungs, so I’m not going to vape.

RP: What do you tell your peers when you learn that they vape or that they are considering vaping?

NHM: I ask my friends about [it], just to get their insight on vaping. The ones that do, they do it mostly as a little escape, just even for a second or an hour, from sources of stress. They become dependent on that as their escape.

RP: Some research suggests vaping may be better than smoking cigarettes. But vaping can be dangerous for everyone, including people who haven’t smoked before. Why do you think that type of messaging is harmful for youth?

NHM: I hear that rhetoric on TV. That was kind of the message during the first wave of vaping, etc. One thing that gets these teenagers into it is the sense of feeling cool from vaping. [Like] back in the day, with cigarettes, it’s pretty much the same issue but with a Gen-Z filter.

RP: What steps do you think that your community can make to discourage vaping?

NHM: Getting it out of school environments or just kids’ environments, like near libraries or schools. You should not be able to walk for two minutes and find e-cigarettes. The first step is probably preventing it.

Second step is to find better ways to express yourself or cope with your mental health. There’s one thing my school did called Challenge Days for sophomores. Everyone talks about their emotions, gives hugs and opens up in close circles. I believe that is a step to incorporate healthier ways to cope with stress.

RP: What do you think of Walnut Creek’s decision to ban flavored tobacco products and electronic smoking devices? Do you hope politicians in Pittsburg take similar measures?

This interview has been edited for clarity.